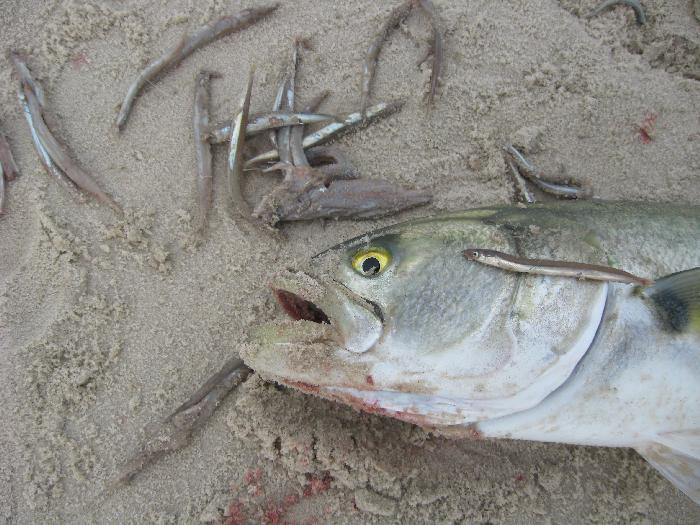 Above: Here is the email with above pic. “Although I'm a Holgate guy the Bluefishing at IBSP has been wicked the past week. Slammers to 13lbs spitting up sand eels and mullet. Maybe this Fall will be for real. This is us yesterday afternoon.” This gives a great shot of what sand eels look like. Many folks still not familiar with this one-time “everywhere” baitfish that has actually declined drastically in numbers over the past 25 years. It is technically a sand lance. There is a similar (far rarer) species that is occasionally dug up as we clam. It is fatter, far more slippery and is more of a loner whereas sand eels usually hang in sometimes massive groups that also bury together – a famed trait which allows this soft-bodied marine creature to protect itself by essentially disappearing into the bottom of the ocean. Thursday, September 18, 2008: Waves: 2-4 foot easterly groundswell. Winds: Tricky; swinging to NE at up to 25 mph (so says the Weather Service). Water temps: Inched up to 74 along beach areas. The fishing is very interesting out there – not overly great, just interesting. Bluefish are getting far more consistent as the bait is really moving. Bait sidebar: One of the largest spearing (Atlantic silversides) runs in recent memory remains in place -- as it has since August. As in past weeks, there is a steady, wide river of them passing nearshore but also showing of veritable clouds of them, turning the water an odd brownish color. It’s interesting because the soon-to-be seen rainfish (bay anchovies) also run so thick they cloud the water but it’s a reddish hue, bordering on blood-like when super thick. Back to the spearing, many fish are showing up with them in-belly, including seemingly friendly kingfish bottom-feeding. My guess is the kingfish are picking up bluefish table droppings. The bassing is there but far from steady. I actually got some not-exact data yesterday from Holgate. The bass there WERE heavily busting on mullet and folks were picking them up on live-lined mullet BUT only one decent fish was actually caught -- where I passed on that quite a few were taken. Hey, I try to pass on info as quickly as possible. Some “fish stories” leak in, for sure. Anyway, I have maybe half a dozen reports of bass near jetties along the front beach, mainly on bait, though slow-retrieved plugs seem to be working. Poppers getting poor results despite the mullet action taking place. Winds are forecast to get really testy, surely hurting boat fishing but just as surely riling the beachfront and possibly kicking up some bass action as the migrating bait gets tossed around. The first 12 hours of the forecast NE winds are usually the best for seeking “stir” stripers. The weekend should see calmer winds with a switch to east then south. Below is the Joe H. report. He and I travel in the same fishing circles but the big difference is he actually catches fishes. (Did I ever mention I’m the world’s worst fisherman? You could spot me a gallon of top-grade patience, a steady bite and I’d still only be good for about five casts before I’d wonder what was going on around the bend.) Jay, Fished Holgate this afternoon. Saw a bunch of mullet towards the inlet. Threw some bucktails around the back. Greeted by bluefish. Saw a floating horseshoe crab (or so I thought), only to watch it pick up speed then turn and swim up current. Looked to be a decent sized dorsal fin that belonged to a shark. There was a bunch of bait in the area so I wouldn't doubt it. I want to target them one of these days. Anyhow, I moved back toward the front and fished for kingfish and croakers. No croakers to be found, but I hit the mother load of kingfish. I caught maybe 10, but I only kept 2 for dinner. Only kept 2 because I couldn't figure out if these fish were breeders or not. They were enormous, pushing 18-19" and fat. They looked like they were full of eggs and not yet spawned out. Could that be possible??? When I had the first one in the wash, I thought it was a puppy red drum! I also caught a pair of pompano (very small) and a bluefish. Funny, I went all the way to NC to look for some pompanos and I catch them at home on Holgate. After the sun went down and the mosquitos sucked the life out of me, I headed for the south end bay side. Found cleaner water and weakfishing that could best be described as extraordinary. Caught a limit (only kept 3) in 10 minutes. Fish were mostly 12-15" but if you used a bigger bucktail you caught bigger fish. Didn't even have to cast. It was strip 10 feet of line off, lob your jig into the water, jig once, and fish on. It got boring after 30 fish so I called it a night and headed home. Back at it Friday. Joe H