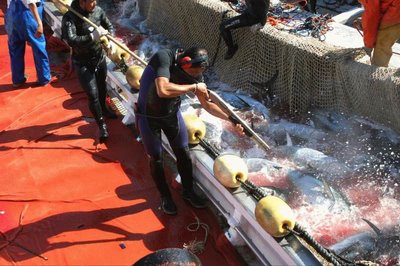 Thursday, June 26, 2008: Waves: 1-2 feet out of the south. Currents: Light south to north. Water temps: Mid-50s. Water clarity: Variable; fair to good. This semi-freakish coldwater syndrome continues. The south winds will not allow warmer water to move in near the beach – and it’s not that warm even further out. We’re to the point in the year where we could be seeing water temps in the upper 60s (though 63 to 65 is more the norm). There have been some beachside water temps as low as 53 yesterday. This is purely anecdotal but those cooler temps seem to me to be junkfish oriented. Skate and dogs seem to shine within the chill. With very warm air moving firmly into place, there has to be a point where solar-warmed water slowly wins the summer battle for supremacy, though I have seen a few summers in the past where the water really never fully warmed due to nonstop southerlies. That’s a bit unlikely this summer since it is going to be a scorcher. And fish are being caught. Fluking remains hot and cold – icy if you consider J.M. had 22 fish and not a single keeper. But the hot goes to A.F. used GULP! to win over three large keepers, including his largest of a lifetime, a 9-pounder caught on a deadstick he was barely watching. There is no rhyme or reason for those occasional showings of keepable fluke. Please take care to be gentle on the throwbacks. A lot of folks are getting better at that side-of-the-boat wrist-flick unhooking that prevent shaving to even handle smaller fish – always a good thing since dropage is the number one doomsday scenario for catch-and-release flatties. I know tuna fishing is good when I get some yft serious poundage dropped off without even asking. Thanks much! We’re edging toward the BHM&TC White Marline Invitational and it is likely going to be packed. Temp note: I’m getting reports that bass chasers are looking for warm eddies. OK, so maybe they’re not the same as off shore eddies but they are somewhat random patches of water closer to 60 degrees as opposed to the nasty mid-50s now seemingly trapped along the beachline. Unfortunately the only warm water patches I’ve heard of are up north a ways (Seaside and up) but that milder water seems to be where the bass are showing the heaviest. We are stuck in the upwelling pattern for the next few days then a strong cold front next week should change the winds and lead to a fairly remarkable changeover to warmer water – as solar heated water works its way in. That push of superfine weakies has spread out, as the fish moved to their assigned backbay stopovers. As you know, weakfish are genetically drawn to their place of birth. E-reports: Here’s a fun report from Joe H. It’s running late because my stupid Hotmail throws good mail into Junk whenever it gets a hankerin’. Jay, Fished the BH surf a bit over the weekend, didn't do much. Found a few nice weakfish on plastics on the bayside though. Mainly right at sunset. Few blues mixed in as well. Traveled back to the BB surf Monday night to see if the fish would bite, since the don't seem to show up on the weekends. Found a few bunker pods (very small in size compared to last two weeks) and set up just up wind of them. Sure enough I found a few bass again. Caught a pair and lost a third. First was 42 1/4". My digital hand scale would fluctuate between 29lb 7oz and 30lb. even. Thankfully for that fish the Simply Bassin tourney board is updated frequently, because if the scale hit 31-32lb she was coming with me. I don't think the fish would of made the 8th place cut. I decided to release the fish because it was in excellent shape and hopefully it will get to spawn a few more times. My second bass was a 29"er that weighed 12lb 14oz. Also released. Still eating my 21lber from last Thursday!!! Not long after that fish, I rolled another one off in the shore break that looked a bit bigger, but certainly not a tourney grade fish---maybe 17-18lb. Not to much in the way of dogfish tonight, maybe three. Zero skates. Fish were active 1 hour before high tide and feeding right on the first sand bar in the white water. Strangely, they all took bunker heads. Not much on the chunks. What was all the commotion on the beach (BB) around sundown??? There were township looking trucks and some sort of forklift on the beach with bright lights. I think Stu was in the area as well. I'm thinking a marine stranding of some sort. Hear anything??? Joe H (As you know by now, that was the finding of the second rare beaked whale stranded on LBI in under 6 months. This one, like the last, looked perfectly healthy – short of being dead. J-mann) ^^^^^^^^^^^^^^^^^^^^^ Jay - not enough fishing for me so far this year. Had the boat out behind beach haven for an afternoon of fluking.....a short afternoon as the wind picked up and ruined our drift .Had 4 fish 16-17.5....ARRH!!! I think if conditions weren't as fast as they were we would have done well on the incoming. Anyway, headed back at 5 p.m. and walked up to the the beach for a dip....to cool off. BUNKER busting over the sandbar....no one there! Ran back to the truck to grab a rod....back to the beach and managed a very fat 25 lb. bass on the first snagged bunker. Had to go out on the sandbar up to my shoulders, but worth the effort. Managed to snag a few more bunker, but no takers. Someone told me those bunker were there all day.....All those bass have not passed us yet....... Geo. H.

Comment by ellymay on July 1, 2008 at 6:28pm
What is that horrible picture with no caption? I'm scaredy.