Saturday, April 05, 2008: It sure seems not many folks are taking advantage of winter flounder season. I stopped at a couple sites where I check out flukers but saw very few folks at a number of prime bayside locales. Maybe there’s a hot bite elsewhere. A lot of buggies were zipping around LBI with rods on-board. I got some minor report-age about those surf stripers. Weather conditions are decent. To be expected, there is more than a little chatter about the increasingly insane and insatiable gasoline prices. Many fishing folks I’ve talked to – dozens in recent weeks – believe the fiercely high fuel costs will lead to more surf fishing. Boat anglers seem intent on picking and choosing fishing sessions based on weather and the action out there. I’m wondering if charters and head boats might not see a real push this summer, as folks share costs to get out there – cashing in on the high chance of success when banking on the know-how of the experts. I’m guessing the inlets will get royally racked this summer, as fishing folks conserve fuel while sticking close to the fisheries. As noted on a couple occasions, I’ve gotten some somber indicators that fishing folks this year are going to want meat to bring home after laying out so much for fuel. This is not the best summer for management to come down so hard on fluke fishermen. When bringing this up the high likelihood of many anglers creating their own minimum size, I got a load of folks agreeing with me. However, I also had more than few others thinking I was encouraging such civil disobedience. That’s total crap of the bull. Admittedly, I gave up fluking a few years back when season shortenings neutralized my favorite flat fishing time and place – fall time in the surf. That doesn’t mean I don’t have a keen interest in the future of the fishery – or the futures of all fisheries for that matter. If the public goes notoriously noncompliant with one species, all other species are instantly in equal danger. In fact, having anglers figure out the ropes – and odds – of getting away with poaching fluke could prove conservationally catastrophic on everything that swims. Sure, there are a ton of us who simply abide by the rules, but that still can’t outweigh the danger of noncompliance. Along these lines, I often reference a large sector of anglers I ran into all over Florida. I can’t count the number of times I found bank fishermen keeping every fish that came to light. They bagged, bucketed or coolered them with lack of concern. Anyone could step up and look inside containers and see the day’s catch – catches of all sizes and shapes. These scofflaws were so adept, they knew when the conservation officers were coming and either went into their fish-hide mode or knew the police so well they didn’t get checked. Hell, I was the only one with all the proper licenses and more often than not I was the only person who got checked. And, no, I didn’t dare to turn anyone in as I was being checked. That would have been suicide. This week I’ll be ordering the entry forms for the 8-week 2008 Simply Bassing tourney. I’ll keep folks posted – as will the participating shops – when they are in and ready for signers up. I had a couple folks ask about digging bloodworms locally. I can assure that it can be done but that’s all the further I’ll be going. Firstly, these aren’t the best of times for tackle shops, especially with all the regulations hurting the potential for summer fishing. The shops are where one can be absolutely sure of getting bloodworms. The only insight I’ll offer is the fact that there seems to be a bit of recovery of local bloodworms, after five years of catastrophic decline, bordering on disappearance. Still, it’s super slow and takes hours of serious digging for just a partial day’s worth of bait. I had a interesting nature experience today. I was in the bayside meadows of Tuckerton. An area I often hang around. It was low tide and as I walked out to the first small ditches, I noticed furious scurrying in very shallow saltwater puddles. On closer inspection, I saw it was fiddler crabs in numbers I have never seen in all of my shoreline exploring in NJ. It was downright eerie in a couple shallow water areas that teemed with thousands of the indigenous crabs, favored by tog fishermen. The thickest populations were in water that was all black, seemingly stirred up. I guess it was something like ice-out for this species. As the season deepens – and daytime temps soar – the fiddlers will turn to non high-sun shifts. Speaking of little crabs among us, we are in the midst of a significant invasion by a small but potentially nasty anti-ecology crustacean known as the Asian shore crab (Hemigrapsus sanguineus). These are all over bay-side LBI right about now. 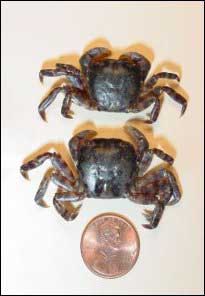 According to U.S. Geological Survey: Hemigrapsus was first recorded in the United States at Townsend Inlet, Cape May County, New Jersey in 1988. This species is now well established and exceptionally abundant along the Atlantic intertidal coastline of the United States from Maine to North Carolina. It is actively breeding and expanding its population within its nonnative range. Because the species is tolerant of a wide range of environmental conditions, it is likely that the invasion will continue along the US coastline. Since this species is so new to the U.S. it’s hard top say what it might do to our ecosystem but no invasive species has brought any good along with it. The crabs are very small so I doubt they might serve as tog bait or the likes. And I’m thinking they offer very little of epicurean import, unless you’re into using tweezers and a magnifying glass to pick crab meat out of tiny crabs.