"High fructose corn syrup ... are you kidding me!?"  Sunday, September 27, 2015: I even hear non wind people bitchin’ about the nonstop northeasterlies. Those are folks who usually leave such inside…

"High fructose corn syrup ... are you kidding me!?" 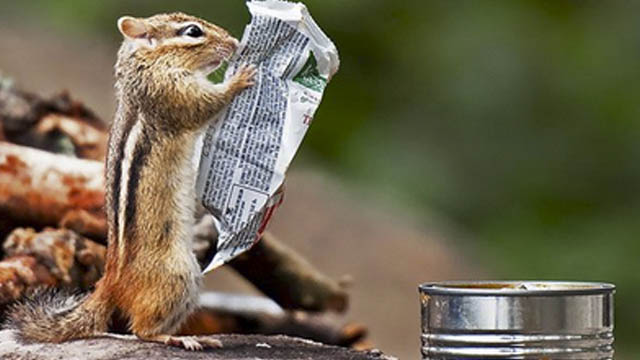 Sunday, September 27, 2015: I even hear non wind people bitchin’ about the nonstop northeasterlies. Those are folks who usually leave such insider lives that wind is nothing more than something they feel twixt car and doorway – or when the wind is coming to terms with window panes.

As for those of us who live and breathe wind, this has been a blow to our fall fishing lifestyles, though I have to admit I’ve modified and adapted to the eight-day nor’easter by hitting the mainland, where the woods cut the gusts down to size. Though I still here it messing with the upper branches, as I’m out there digging old bottles and artifacts. I’ve found some fun stuff that I’ll soon display in here. 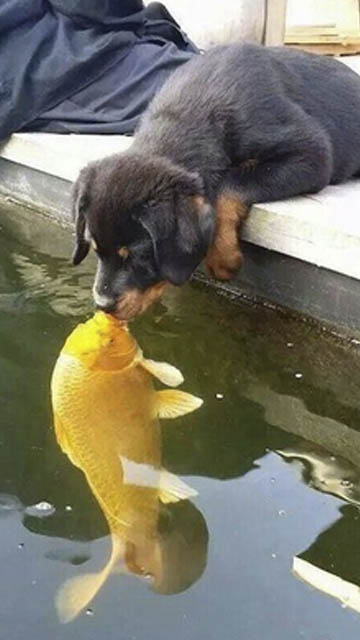 As noted yesterday, it looks like we’re in-line for another nor-easter. The next one might be pushing some rain, unlike this protracted dry nor’easter like this current one. Below: Toughing it out during the current blow. Photo by John James Ryan. The ocean temps have dropped a tad, bottoming out at 70 degrees. Hey, I said “a tad.”  The water itself has stayed kinda clean considering how brown it can get when side-ass winds get gnarly. As to erosion, it’s not nearly as erosional as it could be in the wake of a couple hundred hours of side-assedness. I see where the Outer Banks is seeing full overwash of oceanfront properties. For us, this is more of a valuable redistribution of replenishment sands. Yes, it values the project to have sand moved just off the beachline where it forms sandbars. It also values down-drift areas from the replen zones, which now get the southbound grains. In Surf City, some replen-buried jetties/groins are showing. Good surfing returned there long ago.

Below: Outer Banks taking a beating. We're lucking out. 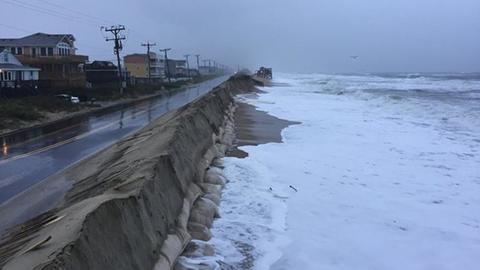 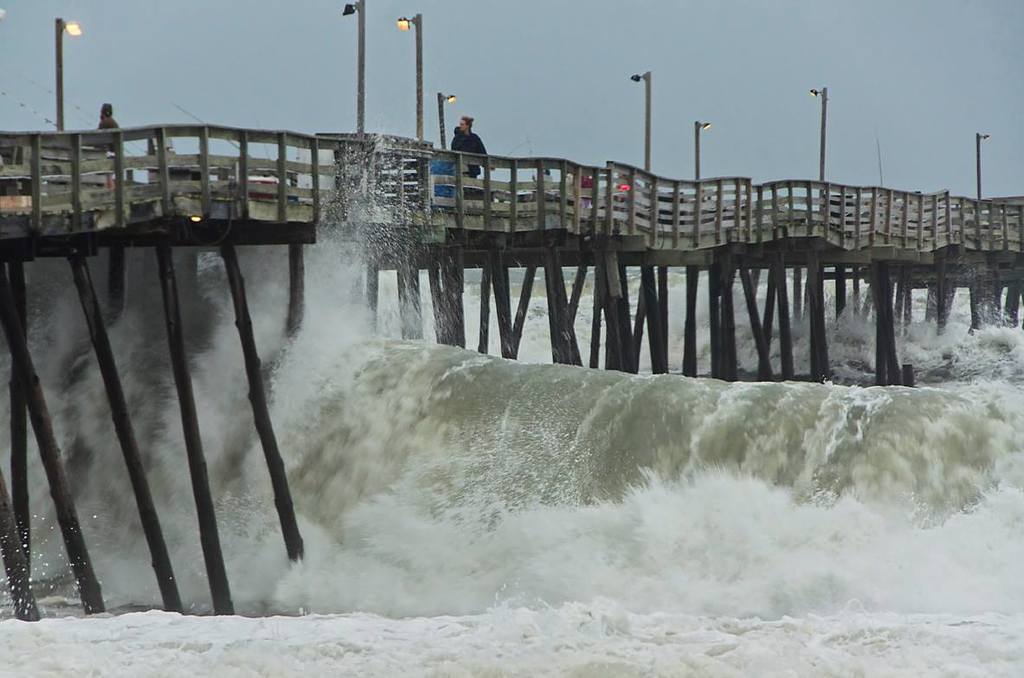 There is absolutely no guessing what fishing will be like after this oceanic agitation. I can go with the prevailing philosophy that surfside stirs like these get bass close to the beach. But that thinking was more apropos when we had surf clams rolling in the swash – and eventually washing up on the beach. No longer. And don’t blame the replenishment the absence of those quintessential shellfish. Their disappearance began well before the first replens were in progress.

Above: There are always calico crabs. There is no doubting bass love them. Here's a typical stomach content of a bass. There is/was also the thinking that stripers swarm into the swash to grab goodies loosed by the wave action. We’ve also kinda been missing the bass. I have noticed very decent catches of stripers being taken up off New England, though many of the hardcore bassers up there swear the bite is nowhere near what it should be. 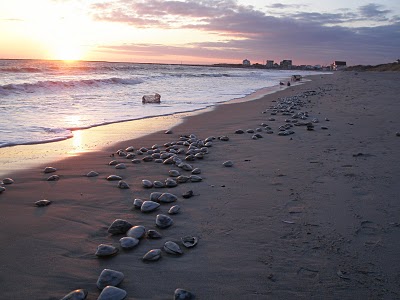 Above: Back in the not-so-distant days.

So I repeat myself: There’s no guessing what the fishing will be like after this blow – and before the next rapidly-approaching nor’easter. In fact, I’m now looking toward the approach and start of the LBI Surf Fishing Classic to indicate what’s a-stir out there. The eight-week Classic runs from Oct. 10 - Dec. 4. It could get off to a fast start so get signed up ASAP. Go to: Fisherman’s Headquarters in Ship Bottom, Surf City Bait and Tackle in Surf City, Captain’s Quarters Bait and Tackle in Brighton Beach, and Jingle’s Bait and Tackle in Beach Haven.

Here's a better look at the Classic's special prizes ...

**** $ 100 for the first legal Red Drum weighed in.
**** Special Prize $25 Gift Certificate for the first fish weighed in by juvenile in Memory of Trevor Kuntzi.
**** Special Prize to a juvenile or student angler for the smallest fish weighed into the tournament.. $50 gift certificate to Jingles Bait and Tackle donate by the Kuntzi family.
**** John Parzych is donating two custom rods one for largest bluefish and the other for the largest striped bass caught on artificial Lure

(Below: I've done serious carp fishing -- and carp bow fishing -- and it's great fun. On hook-and-line, it's very similar to striper and drum fishing, fight-wise. My largest was pushing 40 pounds, in Camden County. That fish even swam way up a huge sewer outflow pipe. I had to run over and stand at the opening of the pipe to keep my line from rubbing on the concrete edges of the pipe. Wild catch-and-release. It went for a compressed ball of white Wonder Bread. j-mann) 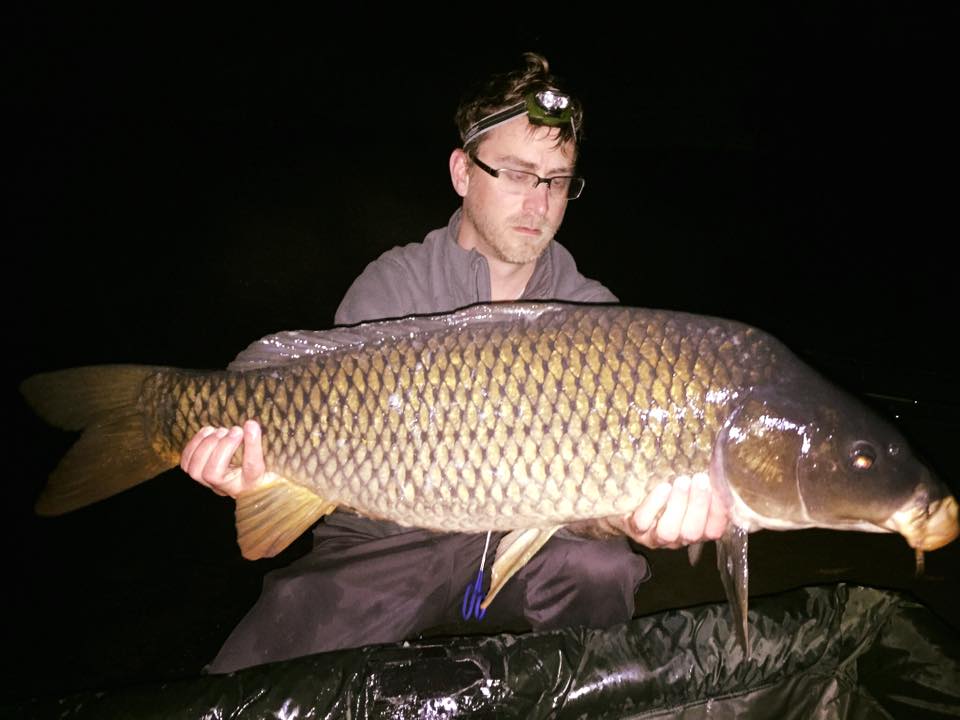 Jeb Says Ignore Pope On Climate Because He’s ‘Not A Scientist’… Pop...

Jeb Bush really isn't a scientist, unlike the pope.

A supermoon will be the star attraction on Sunday night and will coincide with a total lunar eclipse. This full moon will be the closest of 2015 and will appear up to 14 percent larger and 30 percent brighter than a full moon at its farthest point from Earth, according to NASA. (AP file photo) 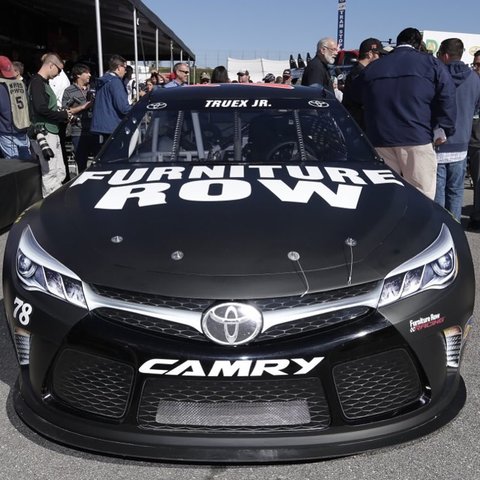 The Denver, Colorado-based team also announced that it has picked up Truex's contract option for 2016.

By joining the Toyota NASCAR fleet, the single-car Furniture Row Racing team will enter into a technical alliance with Joe Gibbs Racing and have Toyota Racing Development, U.S.A. (TRD) build engines for the No. 78 Furniture Row Camrys.

"As we continue our quest to be a contender for this year’s Sprint Cup championship, it's hard not to feel the excitement and enthusiasm of becoming an integral partner with Toyota next season," said Joe Garone, president and general manager of Furniture Row Racing. "The added resources and technical support that Toyota will provide, along with having a technical alliance with Joe Gibbs Racing, definitely increases the growth potential for our team.

“The track record of Toyota and Joe Gibbs Racing speaks for itself. They are both proven winners with an unyielding commitment to raising the performance bar in the NASCAR Sprint Cup Series."

Toyota, which joined the NASCAR Sprint Cup Series in 2007 and partnered a year later with Joe Gibbs Racing, is thrilled about the addition of Furniture Row Racing to its roster.

“Partnering with Furniture Row Racing is a great fit for Toyota and we look forward to the team fielding a Camry in the NASCAR Cup Series in 2016,” said Ed Laukes, vice president of marketing, performance and guest experience for Toyota Motor Sales (TMS), U.S.A. “Furniture Row Racing has proven to be a race-winning organization and we are confident the technical alliance with Joe Gibbs Racing will make Camrys even more competitive and improve performance on the race track. We welcome Furniture Row to the Toyota Racing family and are thrilled to have a championship-caliber driver like Martin Truex Jr. back in the Toyota lineup.”

Garone, who has been with Furniture Row Racing since its inception (2005), expressed his gratitude to Chevrolet and to Richard Childress Racing (RCR).

“I want to thank Chevrolet for its support the past 10 seasons and to Richard Childress Racing as our Chevrolet technical alliance partner since 2010,” said Garone. “The support from Chevrolet and RCR has helped our growth pattern.”

Garone said that he and team owner Barney Visser were happy to pick up the contract option for Truex, a Chase qualifier, who is in his second season as the Furniture Row Racing driver. His season totals to date include one win, seven top fives, 17 top-10s and 536 laps led.

“Martin has done a terrific job driving our No. 78 race car to a victory and into the Chase,” said Garone. “He and crew chief Cole Pearn have established an outstanding chemistry. We look forward to having Martin as the Furniture Row Racing driver in 2016 and beyond.”

The 35-year-old Truex said he is ready and anxious to drive the Furniture Row car in 2016 and rejoin Toyota. He drove a Toyota Camry for four seasons as a member of the Michael Waltrip Racing team from 2010 through 2013.

“I am happy to continue in my role with Furniture Row Racing and feel that we’ve just begun a growth spurt that will take us to a new level,” said Truex. “It’s a great organization and Barney (Visser, team owner) gives us whatever we need to be successful.

“I know the folks from Toyota and I am looking forward to being part of their team again. They build fast engines and having a technical alliance with the highly-successful Joe Gibbs Racing is an added bonus to our program. While our primary focus right now is on the Chase, I am eagerly looking forward to what is in store for our Furniture Row Racing team.”

Furniture Row Racing made its NASCAR debut in 2005, competing in 10 NASCAR XFINITY Series (NXS) races and two NASCAR Sprint Cup Series (NSCS) events that season. The team has qualified for the Chase in two of the last three seasons and was the first single-car team to earn a Chase berth.

Back on January 9th, a group of Wadesboro, North Carolina bikers were riding east on Hwy.74 when they saw a girl about to jump off the Pee Dee River Bridge. So they stopped.

George, their leader, a big burly man of 53, gets off his Harley, walks through a group of gawkers, past the State Trooper who was trying to talk her down off the railing, and says,
"Hey Baby . . . whatcha doin' up there on that railin'?"

While he didn't want to appear "sensitive," George also didn't want to miss this "be-a-legend" opportunity either so he asked . . . "Well, before you jump, Honey-Babe . . .
why don't you give ol' George here your best last kiss?"

So, with no hesitation at all, she leaned back over the railing and did just that . . .
and it was a long, deep, lingering kiss followed immediately by another even better one.

After they breathlessly finished, George gets a big thumbs-up approval from his biker-buddies, the onlookers, and even the State Trooper, and then says, "Wow! That was the best kiss I have ever had! That's a real talent you're wasting there, Sugar Shorts. You could be famous if you rode with me. Why are you committing suicide?"

It's still unclear whether she jumped or was pushed.