Alert: Surf remains decisively dangerous. The ongoing medium-period groundswell had led to an inordinate number of rescues by lifeguards. A few of those recus have ben hairy, like one of 82nd Street, LBT, that had more folks in trouble than the immediate lifeguard force could handle. Other guards and the LBTPD brought things to a happy ending. Yesterday BLBP had it's hands full. Per Don Adams, Barnegat Light Beach Patrol: Final total for today 13 rescues 29 people.

It's after the guards go off duty that things can run deadly. While there are often surfers and other waveriders around after the guards leave, today's south winds will reduce the number of waveriders due to the choppiness. That could mean folks swimming into catastrophic rips without a leg to stand on. We have super water rescue teams but by the time they muster and reach the scene it can tragically be a "recovery" and not a "rescue." First responders know the horrible difference.

Below: Lifeguard in action. It's hard to believe but I don't have a single photo of an LBI guard making a rescue. Down south, guards have a whole other beach user-group to keep a careful eye on ... Assateague ... The one horse is using SPF-50 ... Stallion Protection Factor 50. 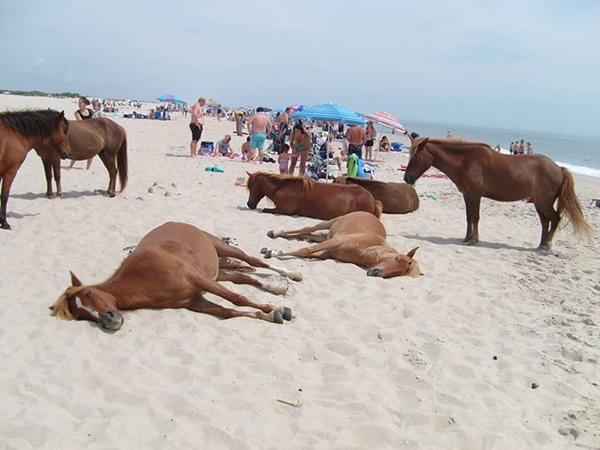 Sunday, August 30, 2015: The south to southwest winds are in early today, as we get ready to shake and bake for the next few days. The difference between the arriving heat is the west wind component, especially starting tomorrow.

The ocean has already given up some of its color to the south winds, having gone from quite clean to a light brown, common with side-ass winds. The cleanness should return quickly by tomorrow.

I spent some time in BL yesterday and the boat traffic in and around the inlet was heavy -- and on the move. I know it’s like that every summer weekend but seeing that rush-hour look, close up and personal, proves boating is far from fading. Looking into the bay prove true sailing isn’t dead either.

I took a couple, reports from boats pulling out at the launch but short of “a few shorts” and “one nice keeper” I didn’t get anything glowing … except on the croaker front, where you fill the barn with 'em ... whatever the hell that means.

CRUISIN’ CROAKERS: Croakers are in the house. These panfish, close relatives to drumfish and spot, are stacked on the bottom in water from 20 to 40 feet deep – and likely elsewhere. Those depths are what I heard from folks catching them – by the loadful.

As we saw a number of years back, these bottom feeders can come into the swash --- and grab virtually all the action, even grabbing bait when bluefish abound. They are also fames for muscling out kingfish in the shallows. That’s not trade-off many folks like seeing with kingfish reigning as one of the finest seafoods out there. 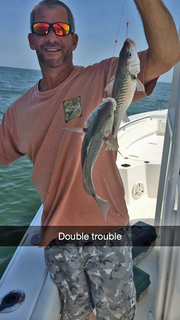 I’ve tried half a dozen ways to prepare croakers, with only moderate luck, taste-wise. The best I heard was breaded (spicy crumbs) and deep- or shallow-fried.

Deep-fried is the full electric Fryolator-type cooker. Shallow fried is done in deep pan with a couple/few inches of hot oil, requiring a flip of the fish.

My best luck with croaker meat was using them in a tangy fish cake, using a recipe common to tog and black seabass.

1 lemon (rind and juice of)

DIRECTIONS: Cook the potatoes in salted water until they are very tender and then drain them and mash them finely.

Combine with the fish and other ingredients down to and including the seasonings and then using wet hands shape them into eight patties.

Dust them with flour and then dip them into the egg and finally coat with the crumbs.

Heat oil to moderate and cook them until they are golden brown on both sides.

FOR THE SAUCE simply combine the ingredients and mix well together and serve over patties and a sharp green salad.

IT’S NOT NOW-TO-THEN: I got an email question from a fellow with his first 4WD truck. It’s a question I’ve been asked before. “Does a buggy permit run from the time I get it until the same time the following year?” Obviously, it doesn’t but it appears some permits in other states run that way. I’ve never seen it but that doesn’t mean it doesn’t exist.

His next comment was to be expected: “So I’m supposed to pay the same price for just a third of the year?”

There is the LBI Surf Fishing Classic special permit that is cheaper than a year-long permit but this fellow, understandably, wants to go on ASAP.

He then dropped the common follow-up question: “How often do they check you for a permit?” -- as if I didn’t get the hidden essence behind that question.

I know it’s not a $500 fine but placing that severity in the minds of newbies might also keep them driving the straight and narrow when buggying -- knowing you don’t want to run afoul of beach buggying laws.

Folks driving the beach without permits irk, like disproportionately, legally-permitted buggiest. I’d actually warn more about annoying the beachfront driving regulars by not having a permit. Hey, I immediately treat another buggy with more acceptance when I see the permit – as mine is not all but gone … but’s that’s an entire other decay matter.

These Tees rock. Anyone can buy them. They make the perfect Tee to wear way back home. Also, I hate to bring this up, but they also make the ideal Christmas stocking stuffer.

The 61st Annual LBI Surf Fishing Classic aka "The Derby" is set for October 10th & runs until December 6th.

This year we are selling T-Shirts for 20.00 any size. They are available now & will be carried by our shop, Captains Quarters, Fisherman Headquarters & Jingles Bait & Tackle.
Back of shirt shown below. Limited quantities available at this time so don't delay 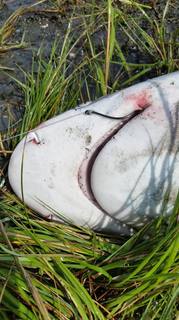 If anyone's looking to take their kids out to catch a lot of these guys for fun, lbi right off the boat ramp pier with clams. My nephew caught 24 within a two hour period and total of 42 between two people.

Doubled up ... bluefin and yellowfin on the fly...

Back home! As the new book gets its final edits, photography complete, the fleyes have been returned. Just in time for the Fall season.

Got a real good one at the end of the day yesterday. Smashed a stick bait. Was F'n awesome! Was one of those "One More Cast" moments before we head for the barn thing. Don't call my business that for noth'n. Caught on El Maestro popping rod. Best stick out there man! ‪#‎saltwatertackle‬

You think getting old is only tough for humans ... 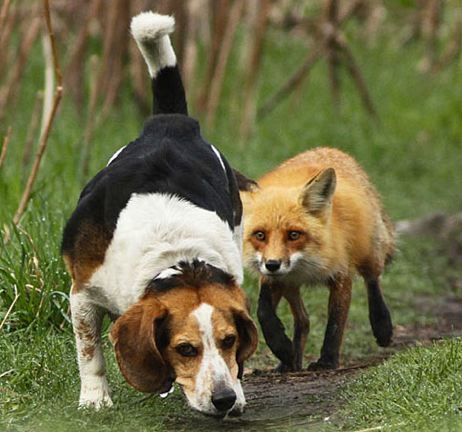 I was in the water yesterday. It was low tide. There were no rips. But I'd like to know where those nice swells originated from. Friend of mine told me that it was really rough in Assateague.

Third day of a northerly ground swell from a deep low in the North Atlantic, per wave watchers. I was not following it.