Somebody call Sharpton!!! Tuesday, August 25, 2015: Face it, half the fun of fall fishing is getting more than ready –while summer still has a month to go. It’s a bit like getting Christmas read…

Tuesday, August 25, 2015: Face it, half the fun of fall fishing is getting more than ready –while summer still has a month to go. It’s a bit like getting Christmas ready before Halloween. Sorta.

I bring this up because of the near insane number of sizzling hot plugs, jigs and flies I’m seeing being hand made. Amazing, A-Company.

I’ve always been partial to collecting artsy plugs for display – and catch hell from plug-maker extraordinaire Tom White for not fishing his creations enough. Oh, I sometimes fish on of those “T.W.” plugs – and cringe every time I cast it. The last frickin’ thing I want is some fish, especially some massive cow, grabbing hold of the damn thing. “Hey, Jay, why did you slap that big bass in the face before you released him?” “You wouldn’t understand, Mel. Pass me that buffing clothe.”

Anyway, if some of you plug and jig makers see me on the beach, please show me some of your wares.

As to you fly-tiers, I can’t fly-cast for s*** but I love quality flies, mainly on those rare occasions when I need a teaser. I don’t know if that usage is kosher in the minds of tiers but I fully appreciate the art of their creations. For me, Clouser designs rock the rockfish, especially the Clousers with transparent red eyes. And have you seen some of wild Deceivers being made? Yowza.

I faithfully patronize our tackle shops so I can talk a bit about the odd adventure I’m having dealing with a bizarre direct-to-China website I jokingly tapped for fishing gear. Hey, the stuff is pennies on the dollar and is worth every penny of it – and not a penny more.

The site is www.banggood.com. And it is truly a direct connection to Peking.

Below: I just have to show you what I fell for … knowingly. And no shiping fees. Make sure to read my notes after seeing these "deals." 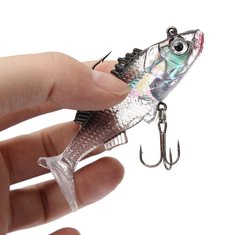 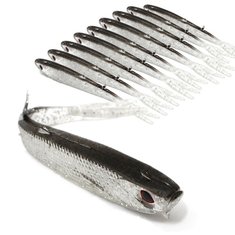 First of all, a slow boat from China doesn't even begin to describe the time it took for me to get my order -- each item arriving separately. They arrived in nearly unopenable plastic bags with enough Chinese writing all over them to make me think they first acted as letters between local Chinese folks and the homeland. Then came the shocker. Oh, it's not the quality, that's actually plenty decent enough. It's the frickin' size! How small are they over there?!  See the 7 piece minnow set, just above? It turns out they're meant to fish for minnow not resemble them. 110 mm should equal out to four inches. I don't know what the Chinese word is for bullshit so I'll use the English. I'll repeat: The workmanship is quite good. Now to find some year-class snapper blues to fully inhale these buggers. Actually, inlet herring will love 'em.

Anyway, I have gotten some decently cool things -- for the minimal price -- from www.banggood.com ... just not on the fishing gear front.

Oh, for you sneerers huffing at me for dealing with China, I assure you that over half of everything in every tackle shop hales from Asia or thereabouts. Fortunately, better companies send representatives over there to watch every inch of the manufacturing process for their "American" goods. At least Penn Reels makes SOME of their reels here in the USA. Loomis blanks outta China. Daiwa? China. Hey, I'm to the point where I'm just happy when a high standard of quality is maintained by a company when it switches production to China. Taking the hopeful road, there was a time when anything "Made in Japan" was the worst possible stuff. It eventually got to where anything "Made in Japan" was the best of the best. I say this only because trying to sidestep Asian good in our fishing realm is neigh impossible. I'm to the point where I'll first give a product a try then decide if it passes muster.

Everyday life in workaday China ... Bummer about your bike, dude.

Still busy and on the water almost every day.  Most recent charters where Saturday, Sunday and Monday.  While some say a bad day a fishing is better than a good day at work, I say a bad day of fishing is made great when patterns are figured out.  What I a mean, is that consistent success on the water is often achieved by knowing the patterns of feeding of your target species.  I often customize my start times based on this key local knowledge. This can be matching the hatch or in the bay knowing what cycle of tide fish are most actively feeding as well and where.  Last week, the best pattern for fluking fishing was the last of incoming through outgoing and slowing only when the current started to peak.  Well during the last three trips there was a departure from this pattern.  Likely cause was poor visibility at the time of high tide since water temperature is not an issue (low to mid 70s).  Even with that, the fluking has been decent but not the 10 fish an hour I had been seeing.  The fluke are staging behind the inlet and starting to feed heavily on bay anchovies (aka rainfish) and spearing as they fatten up for their migration toward the Continental Shelf.  Attached is a picture of Leo Panagopulos from Brooklyn with one of several short fluke he caught yesterday.  Also during the Panagopulos trip, Leo’s dad, Nick, landed a squid in Double Creek Channel (pic attached). In over 35 years on the bay this a first for me.  You know I will be researching the species and life history of the squid that hit the deck ;)  This time of year we should be experiencing peak weakfishing in the backbay, with chumming shrimp the number one method of scoring.  Part of my last two trips where spent chumming for weakfish but none where to be hooked.

On the bait scene: mullet are showing in the back marshes in good numbers.  I have been able to net them for live bait on my trips before sun up.  This time of year I like to target big fluke with big large live baits and I will go the extra mile trying to secure them for my clients. Peanut bunker are very scarce.  Where I should be seeing nice schools this time of year to net I am not.  I have only netted a few peanut bunker while throwing the net on mullet. Still have some open days before back to school. 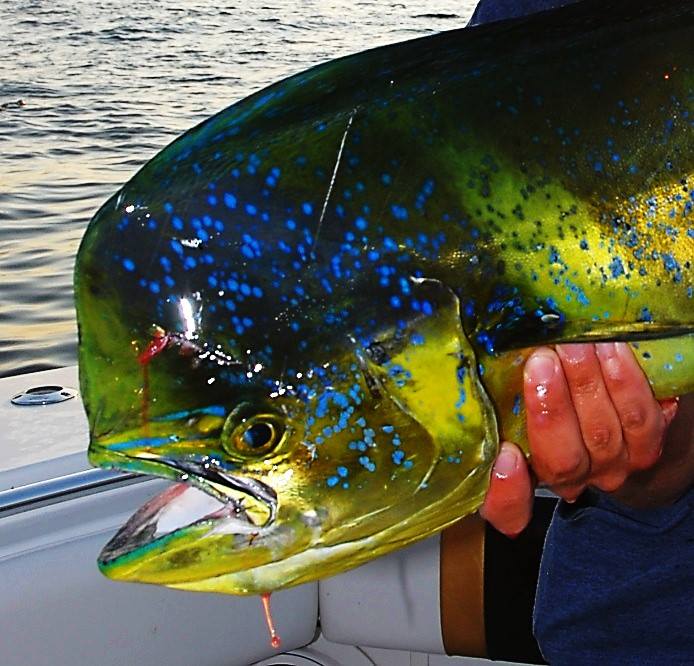 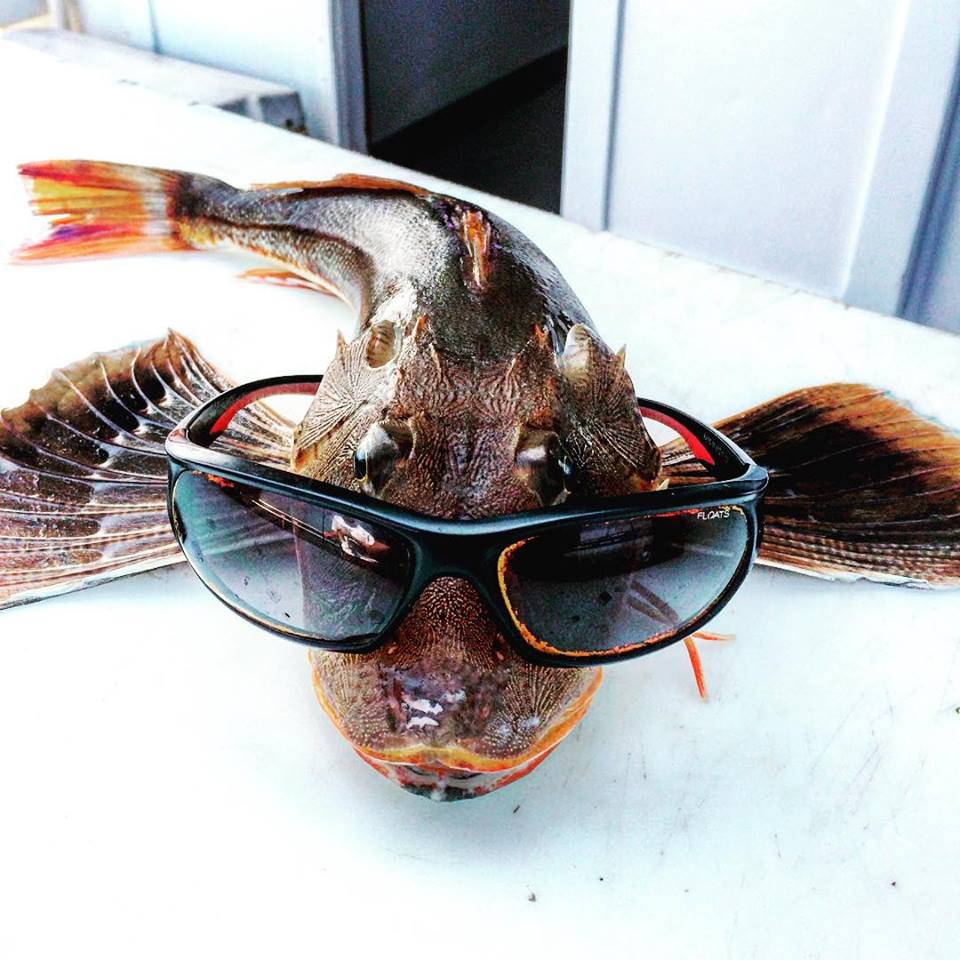 Three!! The MJ’s managed to win in 3 major tournaments in a row with both bigeye tuna and white marlin. Also, we have been a top money winner in the MidAtlantic for three years in a row now! Angler Jeremy Gers caught this 146 pound bigeye on Thursday in the Lindenkohl Canyon to nab 2nd place out of Cape May – good for $80k which brings our total winnings for 2015 to over $200k! However, credit for this fish undoubtedly goes to John Lane of Forked River Diesel who supplie
...

Some time ago I saw a photo on the internet of a Osprey which captured two fish at once. I though it was pretty cool and an anomaly, so a couple days ago when I photographed one, I thought I got lucky, even though it was not a great image , but two days later I got another one I guess it's not that unusual .

Think we will ever see fish like these again in nj. Been 3 years since I had a good bite on big fish. Hope we see them again.