Fearless comes in many forms ... and ages.  Friday, August 07, 2015: Yes, the winds are gonna stay in a solid NE pattern -- and are already quite feisty – and could turn it up a notch by tomorrow,…

Fearless comes in many forms ... and ages.

Friday, August 07, 2015: Yes, the winds are gonna stay in a solid NE pattern -- and are already quite feisty – and could turn it up a notch by tomorrow, though I have reservations about gusts topping 30 mph as is being forecasted. Nonetheless, today and tomorrow will likely be a blow-away day, fishing-wise. That’s not to say the LBI PBA’s Ship Bottom-based fluke contest won’t be going off as scheduled. Hopefully, the NE winds might leave some workable fishing spots on the lee sides of sedges.

"Much more sportier conditions this morning to wrap up the week as the NE winds really started to pick up. Stuck my nose into the wind and was able to continue to bend the rod with some Fluke, Snapper Bluefish & Sea Robins now in the mix . Everyone have a great weekend." 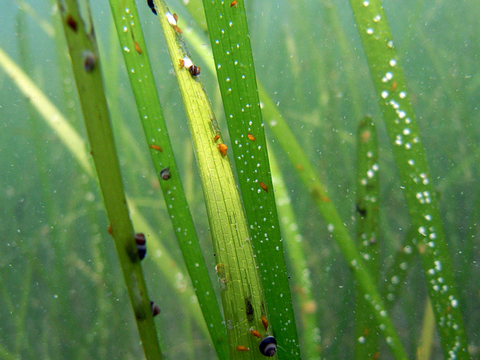 The ocean will become very mild from these onshore winds -- but the grass will come.

Already mats of dead eelgrass are flowing, coming ashore on much of LBI. Most of it is dark, meaning it’s long-dead, even decayed, eelgrass. There are some fresh green blades mixed in, indicating recently uprooted eelgrass, possibly from boat props.

I always wax poetic about the importance of eelgrass so I’ll back it a bit with a bit of MIT verbiage … Who’s gonna argue with those brainboxes?

“Eelgrass habitats are among the most productive and biologically diverse ecosystems on the planet. Living and dead plant material, including leaves, roots and rhizomes, has many valuable ecological functions such as stabilizing seafloor sediments and shorelines, cleaning coastal waters, providing habitat for a diversity of flora and fauna, and supporting the foundation of the detrital food web….”

By the by, these few days of north winds – without gully-washing rains -- will help the bay’s summer heath. It enhances a full water exchange inside the bay. It especially benefit the backbay, as ocean water, arriving via the inlets, gets blown westward.

We caught a fluke that was dark on both sides. Had the best day of fishing in two weeks. The wind switching to the east should make better catches.

Below: How to tell a good champagne ...

We ask that the public view this dolphin from a distance and do not attempt to feed, pet or swim out to the animal. Any interference with the dolphin is considered "harassment" and fines could be given. MMSC staff and volunteers are on scene along with state and federal law enforcement officials. The dolphin has moved into another area, and we are hopeful that it will find its way out to the ocean. We will be monitoring the progress of this bottlenose dolphin, and will not intervene unless it is absolutely necessary. We appreciate the concern of everyone, and hope that all will give the dolphin the space it needs to figure things out. Thank you!

Lookin for sharks, but found some other ugly night beasties in the form of roughtail stingrays that really put a whoopin on us!
Sean Reilly 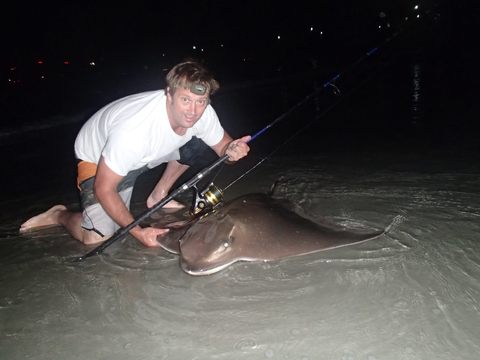 This will assure NJ will never go to self-service gas pumps ... Humans aren't the only creatures who go wild over grabbing cold one ...

Cat people say "A domesticated cat has lost none of the cunning, speed and litheness of its days in the wild."  Oh, really?