Monday, April 13, 2015: Just plain gorgeous out there, though with a chilly south wind picking up off the ocean. Ocean water temps are toying with the mid-40s, however, these real cool nights of late…

Monday, April 13, 2015: Just plain gorgeous out there, though with a chilly south wind picking up off the ocean. Ocean water temps are toying with the mid-40s, however, these real cool nights of late (32 degrees in the pines a couple nights back) quickly knock the mick out of the beachfront’s efforts to warm up – and stay up. Despite less than toasty water temps, stripers are in the swash. Surfcasters are using bloodworms, clams and even some artificials.

Reports range from lone hookups of a schoolie here and there to some serious banging, with one “dozen or more shorts” report arriving from a couple folks fishing an unnamed LBI beachfront, I believe to be southward. And don’t tell me that saying “southward” is burning a site.

NOTE: A wad of sand eels was regurgitated by a surfside striper, hooked near the beach. Stripers often empty their gullets, technically the esophagus, very quickly during a fight. That regurgitating fish must have been into sand eels right next to the beach. By the by, so-called stomach contents are often located deeper in the stomach (than the gullet), where the material is not as easily regurgitated. That is why stomach content found when cleaning a fish is often heavily digested. Yes, that also makes it tougher to fully compute what a fish has recently been eating based on stomach content alone, unless the stomach items are clean – and not stomach-acid etched.

Below: Semi-digested stuff from a striper stomach. Materials looks to be at least four hours in-stomach. Mantis shrimp might be fresher. 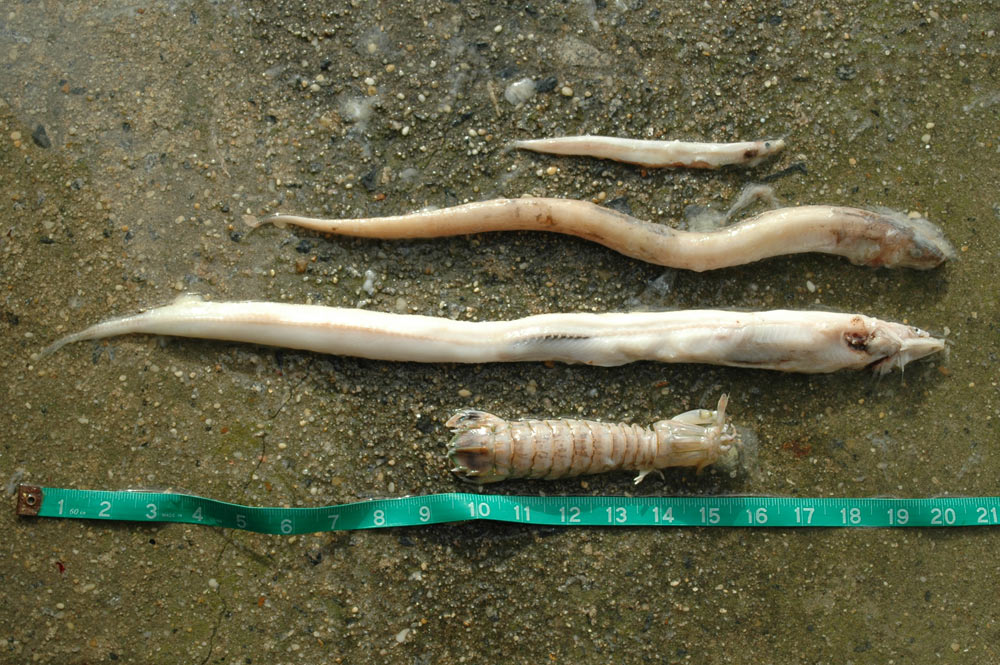 The digging of these so-called sea worms is in full swing up Maine way, where something like 900 licensed harvesters will supply the state’s 38 worm dealers. 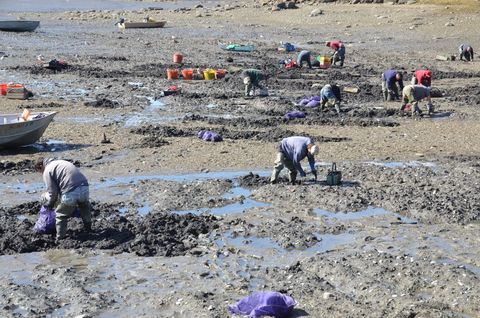 In a good year – seemingly this year – nearly 500,000 pounds of worms will be dug with an in-state value of – steady now – well over $5 million. A digger gets twenty-five cents per bloodworm, regardless of worm size.

Below: What basser doesn't salivate over bass worms like these? 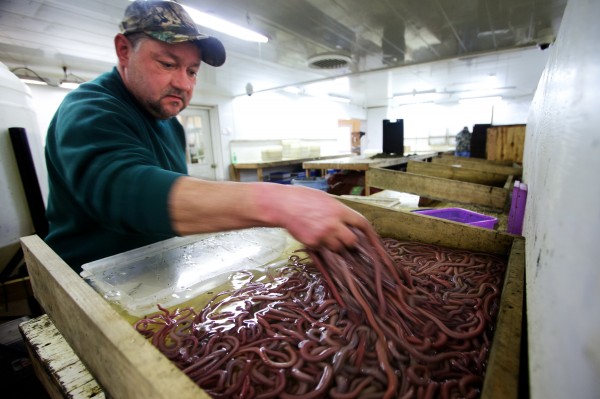 One of the prime East Coast suppliers of bloodworms is the Eastern Sea Worm Company out of Hancock, Maine. Those folks buy the just-dug worms in the a.m., bundle them in seaweed, and, by that afternoon, have them aboard refrigerated trucks bound for Boston.

In Boston, the worms are quickly sorted and shipped to the next layer of wholesalers, who further market the worms along the entire East Coast.

By the time the worms reach the retail level, including our local tackle shops, they’re costing shop owners a pretty penny.

Surprisingly, attrition (die-off) is not that high considering bloodworms can easily die from thermal or toxic shock. Toxic shock can come from the blood of damaged worms and also the exploding fluids from gravid females. Freshwater is like acid to bloodworms. It should be noted that the wholesalers in Maine sort out any small worms to return to the mudflats, a form of conservation. Considering any two bloodworms can produce as many as 40 million eggs, a little conservation can go a long way. I can’t resist getting weird with that data, by computing that 40 million four-inch worms, if hooked end-to-end, would extend from Maine to Florida – and nearly back again. “Days Inn … 3 Miles Ahead … Exit 56 …Bloodworms Welcome.”

Below: These guys fight for bloodworm turf .. make that mud. 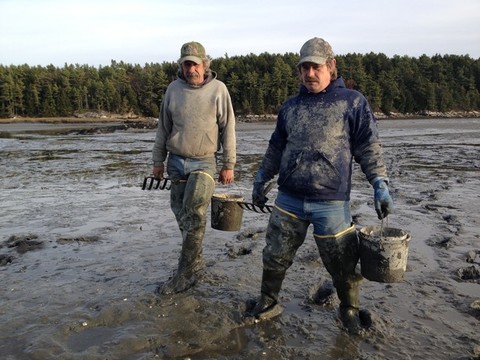 I’ll be digging bloodworms during the next decent low tides, later this week With the new moon and other astronomical effects, he have some real low tides arriving starting Thursday and bottoming out with a  -0.9 low on Saturday afternoon. That is really low, even if west winds aren’t a factor.

I haven’t dug bloodworms in ages, I think not since Sandy – which hit the area I dig real hard, removing some of the essential muddiness bloodies need to live. However, before closing, the Holgate mudflats had bloodies like I had never seen before. While clamming, I was turning them over left and right, including plenty of mediums – the minimum size needed for bassing, unless combining a bunch of smaller ones on the hook. There was really no need to keep them back then, short of limited winter floundering. Now is a different story … and Holgate is tightly closed. 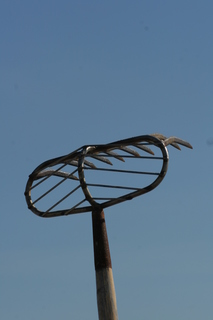 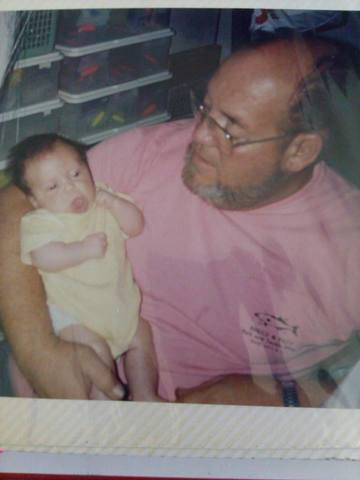 Struggling with the loss of my buddy and mentor Bruce Hoagland of Bruce and Pat’s fame.

Bruce offered me incredible insights into fishing, in particular how to not overthink it – or take it too seriously. Fishing with him was always relaxing and astoundingly informative.

Bruce also allowed me to look over his shoulder as he was making his classic rigs – a single nail and know-how being the main ingredients.

Most of all, Cousin Bruce had that uncanny ability to know when I needed a boost in my spirits -- or a kick in the ass.

He was simply a tireless philosopher and a family man of the highest order. I always felt I was part of his family.

Just got back from making arrangements for Bruce.
We will have a memorial serive on April 18, at Riggs Funeral Home 12th. St & Blvd. in Ship Bottom. time is 1 - 4 PM. Thee well be an OES Service and Masonic Service starting at 2:30 PM. There will be a repass that will be announced later. Thank You everyone for all of your thoughts and prayers at this time. 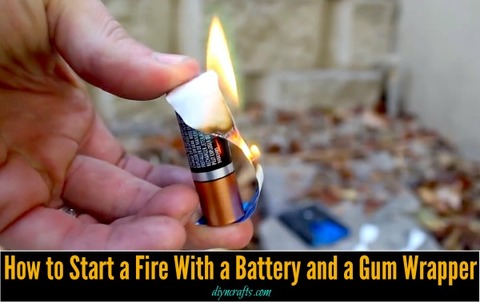 At Point Piedras Blancas on the California coast, researcher Wayne Perryman's annual cow/calf count is underway. Expecting their northbound rush to begin any day, he tells us: "This year we hope to use a small drone to collect vertical images to determine size and shape of moms and babies as they move up the central California Coastline." Read below photo to find out why!

Researchers are trying to figure out why the whales appear to be doing well. "We've seen really good reproductive levels the last four years—lots of calves."

A shifting environment may be the reason. Is warming changing the ocean ecosystem by extending how long the whales can feed up north? Watching gray whales helps scientists get a window into what's happening in that rapidly changing environment.

Mr. Perryman and fellow Southwest Fisheries Science Center researcher John Durban are pioneering the use of drones to track the whales. The team's small hexacopter has already captured amazing images of killer whales.

The hexacopter hovers at about 100 feet, compared with small planes that get pictures from about 750 feet. Best of all, whales don't even know it's there. The fantastic photos it captures show general health conditions as well as markings unique to individuals. Mr. Perryman also wants to use the drones, which can hover just a few feet over the ocean, to collect biological samples. Guided by the live video, the drone could follow the back of the whale and be right over the blowholes to capture the exhaled breath. Scientists could get DNA from the captured epithelial cells use it to identify individual whales, their gender, and many details about their health. Wayne Perryman and John Durban will photograph the gray whales in May. If they succeed in collecting biological samples, the researchers hope to learn more about the whales and the environment they rely on.