Sunday, January 25, 2015: So it looks like we’re goin to see some snow. I’m holding out that the storm just might begin as rain. That might reduce the final inch count, slightly. Of course, it’s hard… 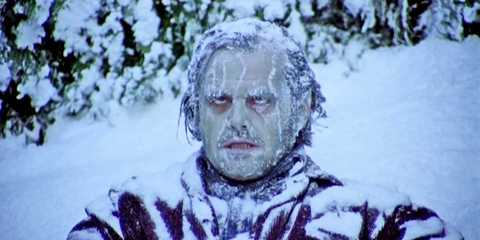 Sunday, January 25, 2015: So it looks like we’re goin to see some snow. I’m holding out that the storm just might begin as rain. That might reduce the final inch count, slightly. Of course, it’s hard to get a proper read on what the pros have to say, with inch count predictions all over the board. Even 18 inches to “locally higher amounts” over 28 inches leaves quite an accumulation flexibility. 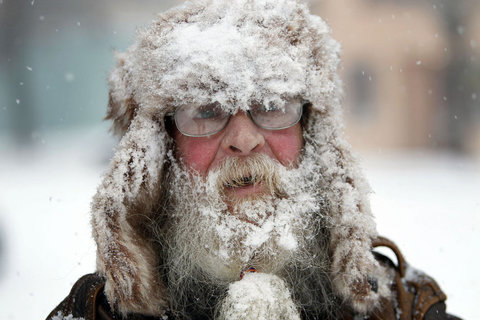 My favorite professional forecast – and I can’t remember where I read it – has snow amounts ranging from six inches to over 18 inches.

HOW BAD WILL IT GET???: Just so I can’t be accused of downplaying storms – and it really takes a lot to get me into the “We’re all gonna die!” storm-approaching mode – I will herein offer a bit of saucy survivalist tutoring that surely smacks of wild and woolly weather times. 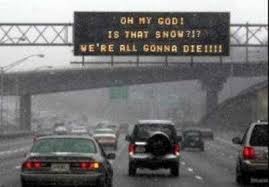 Let it be noted, it is relatively safe to melt just-fallen snow and use it as drinking water. However, it should be well melted first. Don’t be jamming your face into a snow drift and commence to chomping away like it’s an Hawaiian snow cone.  According to the Survival Cache website, “Eating snow can actually lead to further dehydration due to the process your body has to go through to heat and melt the snow once you eat it.  It can also lead to hypothermia.” Snow meant for sipping should not be gathered from the snow surface. Dig down between three and six inches, while steering clear of underlying ground, where snow spoilers like bacteria might live.

In an urban/suburban survival situation, snow bound for drinking should be taken away from buildings, where roof runoff could add baddish things to the snow.

Obviously, backyard snow is better than front-yard snow, near roadways. Even if the roadways haven’t been plowed, the near-road environment can contaminate even recently-fallen snow.

The safest way to render snowfall thoroughly potable is to boil it first. However, if things are so bad that you’re surviving off snow, it might be tough to find a 212-degree heat source. See, I told you I’d add some storm-approach drama. And just like that I got folks totally panicking. Calm down! I promise you will not have to live off snow anytime in the near future.

And even if you do, think of being able to tell the grandkids: “Hell, I lived through the Great and Awful Blizzard of January 2015, when all we had to eat and drink was snowfall. … Hell, just to keep things slightly above freezing, we had to burn over 400 feet of dune fencing. … We ended up eating the wire that held the dune fencing together; chopped it into tiny pieces and put it between two chunks of ice, all sandwich like. T’weren’t half bad goin’ down .., coming out was a whole other story.” EAT SOME FLEAS: Thinking of warmer and funner times to come, the Southern Regional High School Fishing Rams annual flea market is set for Saturday, February 14 from 8 a.m. to 2 p.m. Per usual it’ll be held will be held in the Southern Regional Middle School cafeteria. “New and used fishing gear and services will be available from vendors at over 100 tables.” All proceeds benefit the Southern Regional High School Fishing Club.  Admission is $4. Children under 12 are free when accompanied by an adult. There is still time for professional vendors and private sellers (with goofs from garage cleanouts) to sign up for space. For additional show or vendor information contact Bob MacMaster, 609 597-9481 X2256, rmacmaster@srsd.net

Bring it on.I remember the huge Storm of Jan. 7 and 8  1996 or 6 or 7th whatever it was.Worked for Mt.Holly DPW from which I Retired from in Dec. 2011 at the time and we had 33 inches at the back door to our garage on the level.Worked 100 hours that week and it gets old after a while.Day after Christmas here in Neptune 2010 we had 30 inches and the plows never came down our street until 4 days later.Thankfully My Wife now and I were both on vacation.As long as we don't lose power we will be fine, not like we did after Superstorm Sandy of which we lost power for 11 days.