"Hey, things are tough everywhere."  Sunday, January 11, 2015: The beaches are frozen solid in many areas. That can make for tricky beach driving when the frozen crust breaks and a buggy sinks int…

Sunday, January 11, 2015: The beaches are frozen solid in many areas. That can make for tricky beach driving when the frozen crust breaks and a buggy sinks into the soft sand below. However, it’s not bad for a nice crusty cruise just to see the ocean up close. 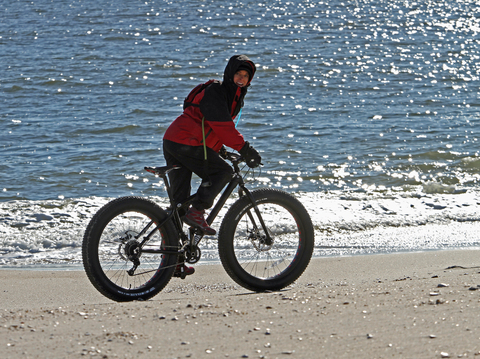 The bay is a different story. While it is well-frozen near the shoreline, it is absurdly dangerous out even a short ways – “absurd’ as in even thinking about walking very far out.

While we have some of very well-trained ice-rescuers with our fire departments, the short time it takes them to reach an ice break-through emergency, the victim is usually hypothermic – or worse.

Below: It's important to give an ice break-through victim a stern talking to .. though it is best done back on shore. Remember, it does not help to blindly rush out to hand-help someone who has broken through, that most often ends up with two or more victims in a deadly and icy mess.

If absolutely no rescue hope is in sight – when far from a rapidly-responding fire department – a long rope, tossed toward the victim, is ideal, providing the victim is still responsive enough to grab hold and, more importantly, hold on.

If a victim has broken though near shore, as is often the case, a tree limb or even the likes of an extension ladder can be extended out to help. I recently saw a ladder being used in an ice-rescue video. The biggest challenge of any ice rescue is the rapidly deteriorating condition of a victim, caused by an almost immediate hypothermic bodily reaction to icy water. Adding to the rescue problems is the massive added weight of soaked winter clothing.

I've only been involved in one serious ice rescue, at a small lake in Bass River State Forest. A young male ice skater (maybe 15 yo) had gone too close to an outflow dam, where moving water reduced the ice thickness. He went through the ice right in front of my eyes.

In that instance, I tied a long rope under my arms – not around my waist! -- and had three ice-skating friends of the teen stay on solid ice, securing the far end of the rescue rope. I was wearing hiking boots.

By the time I crawled over to the victim, the still quite-calm teen had inched his upper torso onto more solid ice by kicking his legs in the water. I figured it would be a snap to pull him all the way out. Yeah, right.

When I got close enough to grab the sleeves of his soaked coat, he had become exhausted -- and dead weight. I tried pulling him all the way up onto the ice surface.

I’ll note here, that was back in the days when I regularly lifted weights (at Lyceum) and was physically pretty primed – and I still couldn’t move that boy an inch. I actually thought he might be stuck on something under water.

Whatever, the sheer dead weight of him and his clothing was damn near immovable. My only hope was to turn my head around and shout to the others to pull me shoreward by the rope.

Thing quickly got more critical. I was the only one secured by the rope so the teen’s dead weight was fully in my hands. As the other skaters were just about pulling the clothes off me, they were also stealing away the last of my grip. Like some Hollywood movie nail-biter, I began losing my grip, inch by inch.

In the end, it was solely the victim who saved himself. I was frickin’ spent. With what had to be a superhuman effort –and without my prodding -- the surely hypothermic victim began kicking like crazy. His leg action managed to finally get his hips onto the ice. That hip hang-up had been the deadly no-go problem all along. Once he was hip-freed, the rope-pulling action of the others had us both back to solid ice in seconds.

As I just about puked my way off the ice, the teen’s buddies took him to the shore and powered him into a nearby oversized “Piney” pickup truck. I know they yelled thanks toward me but I could barely raise my arm in acknowledgement as they sped off.  I have no doubt the young buck survived just fine.

As for me, I quickly recovered and even got in some mid-winter hiking, though I obsessively pondered what I could have done better in that rescue. I still shudder to think what could have happened if the kid hadn't kicked so hard or if I had lost my grip. Spooky to this day.

By the by, this is not even remotely meant to be a how-to of ice rescue. I'm sure I broke more than a few ice-rescue mandates, but, by my reckoning, it was the best chance of a successful rescue with the tools at hand, under those outback circumstance and considering it worked in the end.

Nice find on the Coke bottle.