Saturday, November 22, 2014: I did the long hike onto the back mudflats of Holgate. It’s pushing a slid mile of mud slogging to reach there. It’s a mysterious place where wild horses ridden by naked …

Saturday, November 22, 2014: I did the long hike onto the back mudflats of Holgate. It’s pushing a slid mile of mud slogging to reach there. It’s a mysterious place where wild horses ridden by naked ladies frolic freely. Hey, it was cold and actually kinda boring slogging along out there so I let my imagination free graze a bit, besides, I’m the only one dumb enough to hike all the way down there so who’ll know if I’m merely hallucinating.

In fact, here’s an amazing piece of art apparently left by that culture of naked women atop wild horses. Now you’re believin’ me, I’m bettin’. Proof is proof. 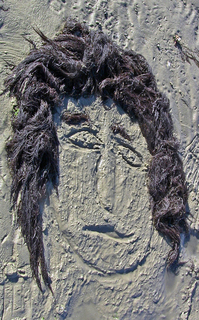 Quite a few folks were clamming the near flats, those flats not far from the furthest point you can drive. As noted, I went the long hike to the once-drivable far flats. Plenty of clams down that-away but I was mainly exploring, in part looking for big chowder clams shells, dropped by gulls. Those eaten out shells get cleaned by nature and offer highly craftable pieces of purple wampum. Wampuming is one of my folk art pastimes when I'm trapped in the frozen guts of winter – to which I have a constantly growing aversion. Face it, winter sucks from the guts upward -- and downward.

To make wampumesque art-stuff, I cut out the purple sections (with diamond wheels) then grind the rough-cut pieces into soothing shapes. I’ll often carve them a bit before sanding and polishing to a wampum-grade high lustre. I’ll put some photos of the final product in here.

Examples below are NOT my goods; 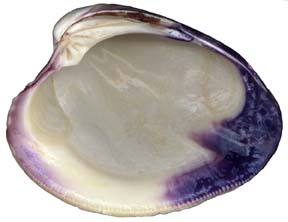 Today didn't offer much in the way of wampum-grade shells. What it did offer was a S-load of chillness. It was frickin’ cold out there, despite the wind coming out of the south. That wind was coming off the ocean, which has really plunged in temperature.

I refuse to say that drop in water temp should make for better bassin'. I’ve offered that possibility this fall too many times.  I haven’t been even remotely correct, despite having history on my side. We should have had bass. He should now have bass. And, come December, we should still have bass. Wrong, wrong – and likely wrong again come December.

On that note, I’ll pass on that some small stripers are showing. Those fish are drifting in toward the beach at the end of the day, a very typical schoolie scenario. They’re also highly inclined to take artificials. The instant it gets dark the action ends. As to boat fishing, I have theses Barnegat Inlet reports to go on...

John Gonteski weighed in this 25lb bass, one of three keepers he caught this morning trolling umbrella rigs outside of BI. 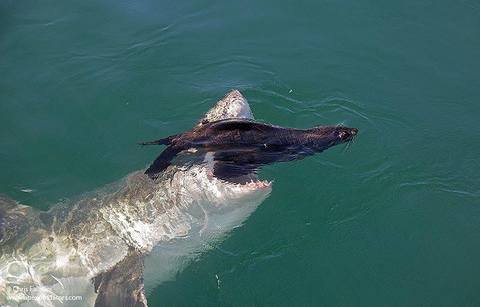