Monday, August 25, 2014: Winds have backed off a small bit. It’s still a tad testy but there is plenty of room for angling the bay, inlets and nearshore. You just have to know your ves…

Monday, August 25, 2014: Winds have backed off a small bit. It’s still a tad testy but there is plenty of room for angling the bay, inlets and nearshore. You just have to know your vessel.

On that subject, I was asked if it is legal to paddleboard through Barnegat Inlet. I can’t say, “Yes,” since I know the USCG is very testy about surfboard-type vessels in the inlet. That said, I have seen folks a-paddle out there. I just highly suggest you know your skills if you’re going up against dropping tide water powering out of the bay -- you can end up way out there or could have a bitch of it paddling back in.

HOLGATE REOPENING: The beaches adjacent to the Forsythe Holgate Wilderness Area will see the Standard reopening date of September 1. That’s Labor Day Monday this year. The exact time of the reopening is dependent on when low tides will allow.

However, the beachline will not be accessible to the far end, i.e. The Rip.

There is a clutch of three black skimmer chicks at the far south tip. They are still being feed by their parents. I’m not sure if they’re fledged (can fly) or not.

The area of the clutch -- and extending around to the back cut and over to the clamming flats -- will be closed to all usages until approximately September 12 -- or until the chicks have become self-sufficient. Signage will mark the closed off zone. Buggies can be driven to that point.

The closed area will NOT be open to the public or boat landings, meaning the popular pull-out area at the back cut will be off limit to all vessels. It will be patrolled.

Apparently, the Holgate Wilderness Area had an above-average piping plover and bird nesting season. The exact numbers aren’t in yet but I figured this summer might be a fine time for plovers due to the sandy overwash areas. Erosion has its admirers.

By the by, although piping plover return to their birthplace to nest, there isn’t always room in the inn for younger plover. Senior birds usually have their pick of the best digs. However, when there is tons of sandy terrain, as is now the case in Holgate, there is some extra room, thus an increase in nesting potential. Further success comes with adequate food – and a lack of predators.

Holgate’s nesting potential should actually improve when the sand from this fall/winter replenishment project washes in from the north. In fact, there will surely be enough future sand in Holgate to host piping plover from all over. But how will random piping plover know the new sands are there? They’re birds. They see things. They think, “Wow, check out that homey sand down there. Screw going any further.”

I back that notion with a stunning ecological observation I made decades back, when fresh sand was applied to what is now the Forsythe Refuge portion of Bonnet Island. No sooner was the new sand in place than plover and skimmers swooped down and nested all over the place.  “I claim this spot in the name of, uh, me.” There’s no way they could have found the newly placed sand except sight from above. As the sand was overgrown with sedges plants, the nesting effort flew the coop.

Can anyone tell what kind of fish this is,It was taken in a tidal marsh,of The Hackensack River Looks like a Rainbow,But in the Hackey,and That Big???? 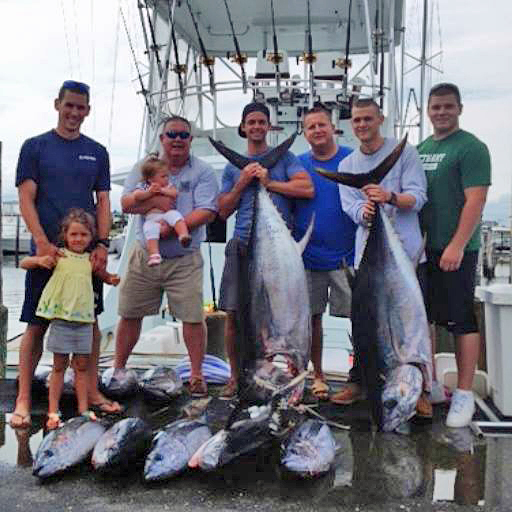 Great fishing continues!!! On our Thurs/Friday overnighter we had 2 big yellowfins, 10 longfins and 2 bigeyes!!

RIP Herman, you were a huge part of BH.. smooth sailing from here on out!