Thursday, May 08, 2014: There is a bite on the beach, fairly hot, per phone messages and Facebook banter. The up side is the onslaught of small bass, way more than we've been seeing, numbers-wise. …

Thursday, May 08, 2014: There is a bite on the beach, fairly hot, per phone messages and Facebook banter.

The up side is the onslaught of small bass, way more than we've been seeing, numbers-wise.

This striper showing might align with favorable beach fishing conditions (until today, which is a bit roiled) and also a fairly rapid rise in water temps, reaching that schoolie-loving low 50s.

For pluggers, that ocean temp rise is just what the artificials doctor ordered. Warmer water ups the metabolism of bass, meaning they're far more inclined to get frisky when plugs and plastics suddenly drop out of the sky. It also makes them go gonzo on eels -- either real or artificial. Why so? Eels are also water-temp sensitive and starts oozing about as things warm. And, no, eels aren't returning from spawning out in the Sargasso Sea. They die after that one massive mating party. Hopefully, they keel over in sheer bliss and pass peacefully into the eel hereafter. 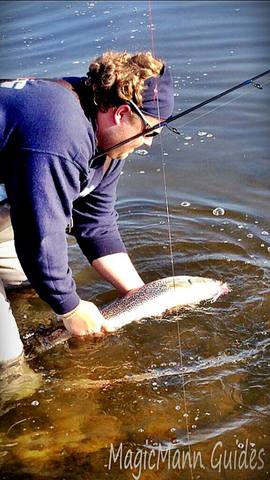 Now to the not-so-good news. The blues are back. Yes, I’m a dyed-in-the-wool bluefish appreciator, but not so much in spring when they are the kiss of death – literally – for the Causeway weakfish bite. The other night I has a pink plastic chopped in two and knew the toothy writing was on the wall. With no steel leaders in hand, I wandered home. Of course, I’ll adjust quickly and have some fun with the always insanely ravenous spring bluefish bite. The bay holds the best blues’ play. Starting soon, birdplay will mark the blues – often late-day – charging the flats near the sedge islands of Little Egg area and also just inside, and within, Barnegat Inlet.

I’m getting the usual flow of questions regarding black drum fishing. I’ve done it for years/decades but still haven’t got a positive game plan for targeting them. I feel the surest zone in near Little Egg Inlet and over toward Grassy – or in the deep waters just off the Sheepsheads. I like drifting big chunks of clams in a style reminiscent of fluke fishing – which are already around, a fellow I know having taken a 20-inch flatties last week. I don’t think there is any proven way of targeting black drum in the surf, short of fishing the way one always does when clam-chucking for stripers. I have heard that colored beads (a slew of them, near the bait) up the odds of catching the eyes of passing drums.

As for the always tricky question of dining upon black drum, not only are fish up to 20 pounds just fine for eating but the colder spring water holds the parasite presence way down. Not that those marine worms, when cooked, present any danger whatsoever. Popular fish like cod have way more wormage than black drum. 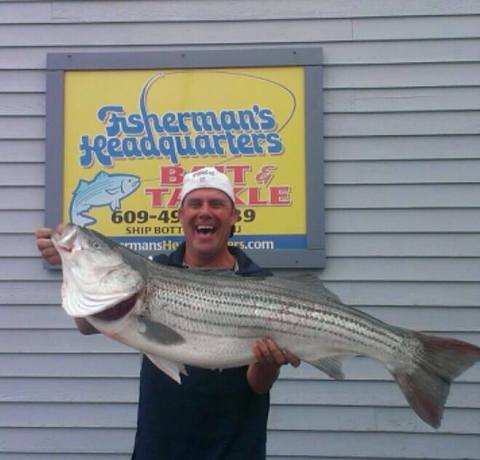 (Just in):  Todd Avery of the Merchantville Fishing Club weighed in this 40.5" 26-lb 10-oz striper. Todd reported heading out looking for some blues with bunker. He obviously found something much larger!

The captains of the Beach Haven Charter Fishing Association are now booking charters and “open boat” trips for a variety of fish both in the inshore ocean waters and in the bay.

Early in the fishing season many anglers may not be ready to book a full charter. With an “open boat” trip, the fishermen pay on an individual basis and will be part of a party with other enthusiastic anglers. It is a great way to cut the expenses and still get a great day on the water.

Over the past several days both the striped bass and black drumfish have finally responded to the rising water temperatures. Both bass and drum are being caught in the waters just inside Little Egg Inlet and up to the mouth of the Mullica River in the Graveling Point area.

In these areas the preferred method of fishing so far has been putting out a healthy slick of clam chum and fishing with fresh clams on the hooks. Circle hooks are advised for this fishing at this point due to the high numbers of undersized bass that are around.

Most of the drumfish have been in the 20-30 pound range but some have been boated that were close to 50-pounds.

There are bluefish scattered around the bay also with some showing up in the clam chum and others being caught by boats trolling small spoons in the area of the Middle Grounds.

Additional information on the association and its captains and boats can be found at www.BHCFA.org