If you’re lookin’ to fish the LBI suds think small – and numerous. The spot are so thick you can nab double headers on kingfish rigs or even pompano rigs (tweaked with smaller hooks). The last I heard the North End was alive with them, though they’ll surely be spreading Island-wide.  Below are a couple fine (Carolina) spot recipes.

I gut and scaale them and cook them whole. You get tons

Cover bottom of frying pan ½ inch deep with veggie oil. Heat on medium high until a dash of flour bubbles in the oil. Salt and pepper spot, then roll fish in flour until it is coated. Place spot in hot oil and cook, flipping until both sides are brown. Serves 2.

Beat eggs and mix with butter and beer. Stir in flour and cornstarch. Heat oil on high in deep fryer. Dip each spot in batter and then fry until golden brown. Drain on paper towels and serve. Serves 3 to 4 Then there are the kingfish. Not nearly as plentiful as the spot but larger -- and running large. A couple kingfish taken in the surf have been as big as the species gets around here.

By the by, you might hear our kingfish, or kingcroakers, referred to at "chub" in the Carolinas and "whiting" in florida, where the term kingfish is strictly reserved for the prestigious king mackerel. Some Floridians like  the confusing term "sea mullet."

Kingfish are arguably our tastiest nearshore fish BUT  (!) they really need to be cared for. Bad: Throwing them in a hot empty bucket or, even worse, allowing them to suffocate then stew in a bucket filled with water. I'd much rather see them buried in cool sand, or, best of all, in some ice that you've brought along knowing you'll be hooking into some of the finest top-shelf eating material in the sea. It doesn't take a huge load of ice at the bottom of a 5-gallon bucket to keep catches cool, providing you jam a towel fully over the ice. Best of all is a good old cooled down cooler. It doesn't have to be huge since these are panfish. However, a cooler with nothing cold inside is even worse than an open bucket. It's an oven. Ice packs are great, but even then cover the cooler with towel to help the freshness cause.

Clean fish as quickly as possible -- but not necessarily on the beach. You heard right. it's not a freshness factor but a sand crunch matter. On the beach it's way too easy to get sand in the filets. Take it from a former chef, there is no way to rinse all the sand out of the meat later. When bitten, a  single grain of sand can ruin an otherwise tasty bite of fish.

As for readying kingfish, they're best cooked in the round, though they are nicely shaped for very accurate fileting. 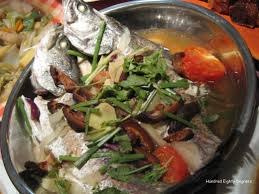 When cooking, do not go crazy with spice since this is one of the purest tasting fish out there. However, they deep fry to a through-the-ceiling scrumptiousness. Beer batter rules.

And how about those houndfish? For whatever reason, folks are nabbing these southern visitors like never before. Wild fighters when larger. Last year in the early spring we were at Atlantic Beach,NC which is a long island just like our LBI here and they call the kingfish Sea Mullet there*

I recall that now. I'd vacation on the Outer Banks and folks would think I was a minority type since I was actually targeting sea mullet and spot.