Simply Bassing entry forms will be in the shops this week. Get on it. This is fun stuff and geared for serious angling. Sure, we love when newbies and kids get involved but I have to admit this event can focus on the biggest and baddest bass. In fact, some top anglers get involved, some of whom can’t work the fall Classic as hard.

Below are some reports that show the stripering has begun, with an expected showing of schoolie bass, including some as small as 14 inches, par for the early-season course.

I do have to add a bit of a discrepancy regarding ocean water temps, which many anglers and shop now have at ranging from the low to mid 50s. I’ve been using some official gear and I’m seeing middle to even low 40s. That could be my taking the temps in the shallows but that’s where the bass often hang when fishing. That could show that chunk baits might hold an edge over jigs and artificials.

By the by, jigs, especially the Spros and related high-look models, can be “tipped” with bait and retrieved slowly, with minimal hopping action – not unlike fluking with a bait-loaded jig.

Josh at Viking Outfitters, Barnegat Light, said it’s finally starting to “go off.” Per Josh, it’s either teasers run above diamond jigs (surgical tails always help as an eye-catcher) or clam baits, gobbed on and left to soak. Gimme the action-casting over the dead-sticking -- any day -- including today, when I’ll get in some sunnyside up jigging.

Laura at Fisherman’s HDQ told of a sometimes moderate bite in the surf, via clams. A 22-pounder (on bunker) came into the shop(s) indicating a few larger model stripers are out and about. The shop has been busy so the angling effort is turning on. Hey, plenty of room and plenty of bait, get out there.

Margaret at Jingles said the bassing can be decent on both bay and ocean sides, though you want to ferret out where the better bassing is taking place. “If it isn’t any good where you’re at, move,” said Margaret. On the bayside, docks and bulkheads abutting deeper water can be worked for smaller bass going for artificials.

Surf City Bait and Tackle reports “Fishes (bass) are now being caught.” Much in the vein of the day, it’s Avas (yellow tails, go figure) and clams doing just fine. Incoming tide seems to shine. A few of the bass are that close to keepable, i.e. 27.5-inchers. A good-old sundial was also taken. Those see-through buggers always make me smile over how aggressive they are for such a small flatfish, willing to grab a bass-sized jighead.

Dan over at Captain’s Quarters in Brighton Beach, the beachside bassing is also keeping folks coming back to the shop to re-up on clams or fresh bunker. The just-caught bunker were taken off LBI by BL commercial fishermen – tapping into a decent pod found just off the beach.

I’m once again looking for any and all reports or insights into what is being caught and where. I’m always discreet in not burning spots, going instead with general areas. I do like to offer exact bait, rigs and tackle tips.

Via Fishermna's HDQ: Ted Schmutz just came in stoked up for more clams. "The bite is on! I just left the beach with a nice one. Heading back now." Ted weighed in this 22lbs 2ozs Striper that he just caught off of the mid-island surf on clam. 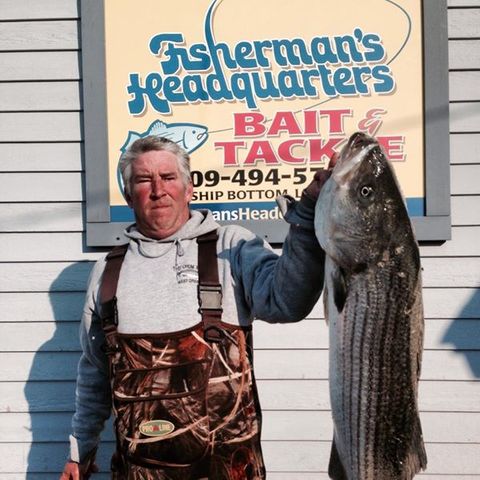 Check out this video (below) I took of a total looker of a skunk.

A preggy mom skunk coming out late in the day to get a jump on a night of foraging, this gorgeous gal was aware of my presence but though little of it, as she rooted heartily, as seen in the video.

Warily, she got within maybe 10 feet of me, eyeing me now and again while carrying on her dedicated digging for whatever was buried in the ground. Though omnivores, they prefer being carnivores, bordering on insectivores, with a love for grubs, worms and beetles. I think this gal was on the grub and beetle trial.

The upside for this sporty skunk is her home location, adjacent to a wilderness wetland area. Her kids will have some prime foraging and territory seeking once grown.

Another look (Can you tell I liked this gal?): https://www.youtube.com/watch?v=kLzL3ayF-d8 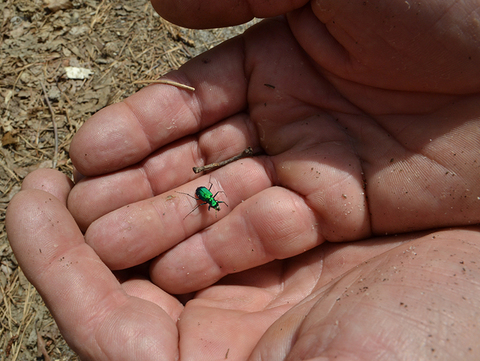 This is a prime time for the tiger beetle in me. The Cicindela (genus) come out – and arrive – starting now and peaking in July. They are among the fastest running insects known, for their size they run at roughly a human speed of 480 mph. Some of them live up to their “tiger” name via mandibles that can crisscross cut through skin like nothin’. The one I’m holding here poses no biting threat. Some tiger beetles aren’t so harmless. 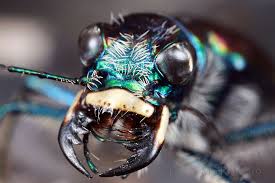