It's not as peaceful as it seems out there. Check out this video: https://www.youtube.com/edit?o=U&feature=vm&video_id=lFyMtJ...

I have a dusturbing tale to tell from the north end of LBI.

This week, John R. was walking his two lab-mix dogs, Lizzie (younger) and Tessie (older). The two girls had wandered a bit and were nosing around when Tessie let loose some abnormal, downright panicked crying sounds. John ran over and found her in the potentially deadly squeeze of a professional wire snare.

I happen to know a bit about snares, now commonly used in Jersey to snag animals since leg-hold traps were rightfully banned. Along with virtually all animal rights groups, I’m not wild about them -- though I do realize there are wildlife instance where a pesky predator needs to be reined in.

Snares are little more than low-viz pieces of aircraft-grade wire, with one end shaped into a loop, enforced by a compression coupling that can either reversibly or irreversibly tighten. Legally, the type that is irreversible is restricted to submerged snare placement. 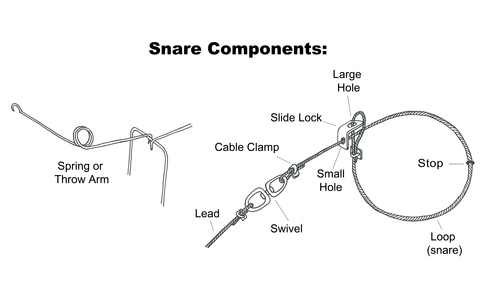 Any sized animal can get nabbed by a snare, usually in the dark. The size and setting of the loop varies for different species. They are most effective when set in a vegetated area. Prime placement points are animal trails, which are marked by tracks or parted vegetation.

Here's how one is positioned in BL. Might have to look closely or enlarge photo. Hey, they're meant to be covert. 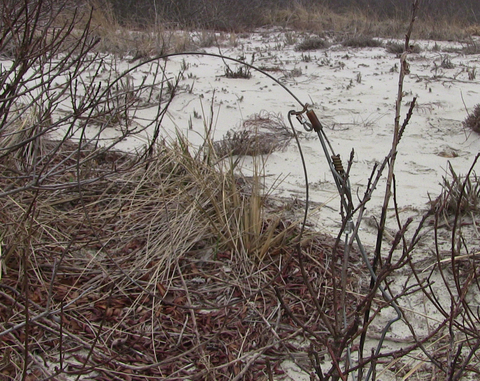 I personally got nabbed by one of those lousy suckers when I stepped in an illegally-placed, land-based, non-reversing beaver snare. I had a hellacious – and cuss-acious -- time getting it loosened … as did John, in the dunes of Barnegat Light as he frantically tried to free Tessie.

Then, no sooner does he free Tessie than Lizzie rings out in a panic. Damn if she isn’t badly caught in yet another snare … around her neck … and being strangled! “She was just about gone before I got the snare off,” John told me a day later, still fuming from the incident.

So, why were snares there -- and now?

The track evidence is obvious. Foxes have lived thereabouts, long and hard, for decades. But why have they become such animals non grata? I’m looking into that, though the snares themselves might offer an explanation. 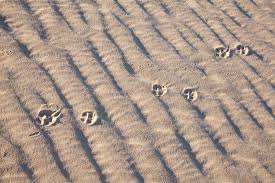 Per John, they belong to the US Fish and Wildlife Service. As required by law, the BL dune-based snares have ID tags.

That struck me as a tad inconsistent. Oh, the feds use snares, to be sure, but there is absolutely no US government property anywhere near the snares. Then, it hit me -- like a tiny bird: piping plovers, which are just now returning to nest. The nearby Barnegat Light State Park has been pushing the preservation of piping plover by marking and protecting nesting sites near the New South Jetty. The USF&W Service are committed to protecting plover due to its “endangered species” status. That might very well explain the feds either wiring the dunes or offering the use of their equipment. 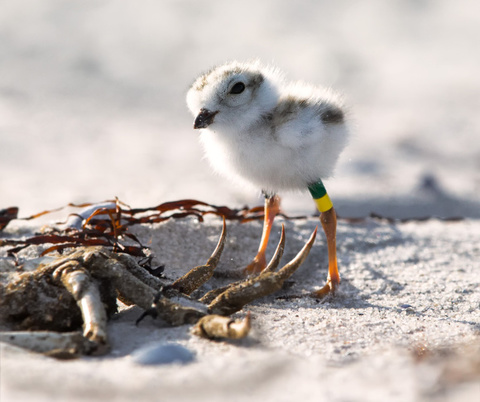 As to the foxes, most North End folks know foxes are regular BL denizens. Some are regular backyard dinner guests, thanks to feral cat food bowls left on back stoops. But, when it comes to foxes versus plovers, foxes seemingly draw the short stick and must therefore be eliminated – if need be, with extreme prejudice. Yes, potential death. It could be said foxes have to pay the piper. 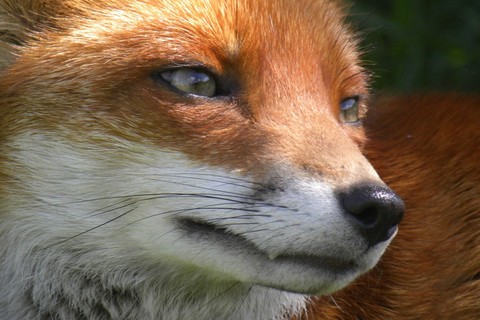 As to snares being dispersed adjacent to a heavy-used public beach and dune sector, although legal, it could have some nasty-ass legal ramifications if a beloved pet – or an almost as beloved child -- gets hung up in the fox-ridding furor.

By the by, even I’ll admit that snaring is preferable to pitching cyanide canisters into fox dens, as has been tried in the past. Such poisonous gas warfare reeks of world-class craziness.

I have personally checked out the snares -- and they are plenty plentiful. I also checked nearby human footprints and recognize that the snares – at least the ones I saw -- had been recently checked. By law, they must be checked daily.

I also saw that a few snares were very close to a walkway sporting a slew of assorted dog paw prints from folks walking their pets. While there is a leash law thereabouts, dogs, with their noses to the ground, might easily overlook any signs ordering them to remain on-leash. I’ll adroitly sidestep how any trapped wildlife taken in the BL dunes might be, uh, attended to -- be it an ugly dispatching or the proverbially euphemistic “relocation.”

Also, in natural fairness, there is a nagging need to protect the nesting plover, along with some other not-so-rare bird species, now roosting in the state park. Personally, I can’t help but wonder why I see dozens of cat paw prints -- and even the cats themselves – to every fox paw print. While those protecting the birds are all snare-happy and macho when it comes to eliminating foxes, raccoon and such, they wane in fervor when it comes to keeping feral or even home-based felines in check.

Anyway, I’ve wracked my brain trying to come up with a live-and-let-live answer to the conservation quandary of keeping foxes from seeking tasty bird eggs. The most I came up with – for one flashing Old World moment – was a hardy,  “Tally ho!” CAUTION!!!!!!!!!!!!!!!!!!: Below is a gap. For those who might not want to see how a snare can work, go no further. Keep in mind that wildlife control is not a pretty business but is sometimes needed, most often when humans have created an imbalance in nature ... 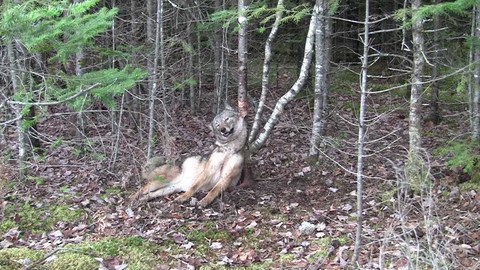