LBI Update: 4:30 p.m.: Subtle shift in winds, more to the north. Rain into moderate snow. Snow should remain moderate to heavy for a couple hours yet.

More troubling, temps to fall through the 20s. Freezing will occur on roadways overnight. Salting doesn't cut it when roadways are flooded -- and then the waters recede. Black ice could shine ...

The advantageous wind shift is likely a little too late to help down south (Cape May and Ocean City).

I also think Beach Haven is in a spot of trouble for tonight's 10- to 11-pm bayside high tide. This applies mainly to the flood-prone zones -- and there are more than a few of them that have worsened in recent years (from sinkage).

Also, if you're in any LBI frequent flood zone, you might want to park up toward the ocean overnight. Oh, you've been up there since yesterday, eh? Just checkin'. 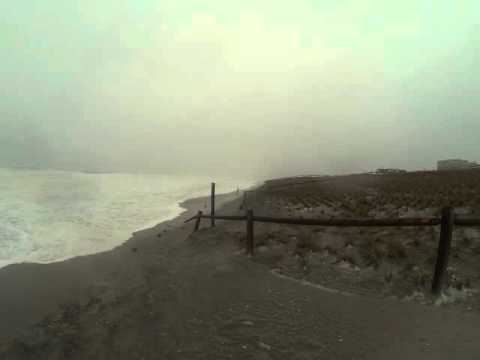 1/23/2016 3:36 PM: As I’ve been noting lately, I’m out of the beach replenishment debate. But having just checked out part of the North End, I can’t overlook what I just saw on a number of Harvey Cedars beaches – surfing areas where the waves are historically the largest on LBI. Succinctly put: It’s holding its own -- and then some.

I’ve fished and surfed that fine town since the 1960s -- and watched erosion eat away at its shoreline nearly as long. This current, seriously cranked-up storm is the type that would have formerly left HC oceanfront homes clinging to cliff edges by the thread of their teeth, as in 2009, below: As we speak – and with a killer high tide rising thereabouts -- the HC beaches are momentarily no-more -- vanished, as would be expected. Overlooking the oceanside sand, the borough’s manmade dunes are so dang high and dry that the planted dune grass is ready to sun itself when the clouds clear, as you can kinda see in the video.

Again, I’m not saying this as some sort of endorsement of replenishment. I’m just noting that something right was seemingly done to keep the ocean from teetering on the edge with every storm.

At the same emphatic moment, I doubt the easement holdouts, likely not even around this time of year, will even distantly acknowledge the power of replen dunes. It all comes down to maximizing rental fees for them.

For anti-replen types. Feel free to squawk out all the contrary rhetoric you want. I’m betting folks you won’t be well-received by those watching this storm from behind replenished beaches and dunes – and I’m not just talking oceanfronters but anyone who lives west of the rebuilt beachline.