SHACK SALVATION: If you take an extended glance over at the famed Old Clam Shack on the Causeway, you’ll see some fresh 2-bys holding up the inside of the decrepit structure. That rapidly placed bracing is the start of what might be the salvation of the renowned landmark -- damn near as recognizable to locals and visitors as Old Barney.
An at-first secretive group of guys is making the first concerted effort to save the feeble failing cedar structure. This overt move – many folks have… Continue 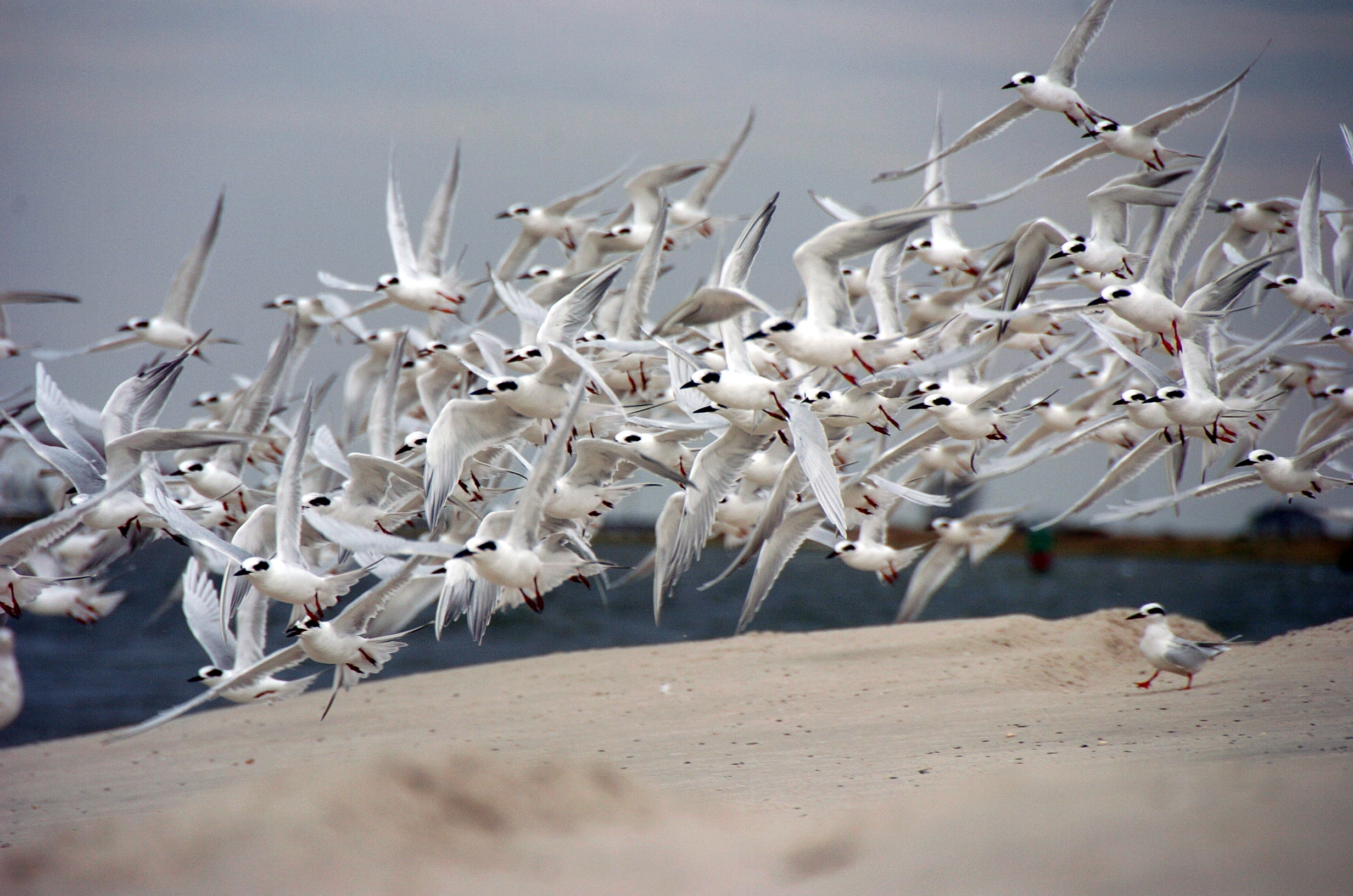 There's one in every crowd --- "Hell. I don't see any cat." It’s that humbling time of the year where I ask for donations to keep this blog up and running. It is a time consuming enterprise but I enjoy it. It’s kinda therapeutic. I hope you find it fun – and functional. I’d also like to take this time to sincerely thank those who email or phone me with tales, fishing reports and questions. It’s energizing. Donations can be mailed to: Jay Mann, 222… Continue

Saturday, October 10, 2009: Waves: Dropping throughout day from 5 feet down to inconsistent 3 feet. Winds: Strong west but not as hard as yesterday’s SE. Water clarity: early day was poor but began cleaning up rapidly; could see very good by tomorrow. Holgate water brown all day including late.

Not a great surfcasting day out there was large seas and very high tide midday but plenty of weekend casters, including those launching the Long Beach Island Surf Fishing Classic. Seminar was… Continue

Well, we sidestepped rainy weather that was forecasted but the winds made up for that reprieve. Winds to about 20 mph would not give it a break. The wind was so steady that gusts weren’t much higher and lulls weren’t much lower – or even existent.

The ocean stayed clean and there were a goodly number of guys fishing just about every jetty. Catching was not good. I did lots of plugging and am still… Continue

The winds dropped enough to free up surfcasters but still kept many a boat angler in berth. By late day, the last gusts were pretty much done and it glassed off.

Lots of folks working the suds as I drove around. Not a ton of catching. Even the kingfish were not saluting. I have talked with a number of folks who can’t fit any more kingfish filets in their freezers. By the by, kingfish freezes… Continue

I was blown away by today. That happens a lot when you try to stand at the tip of Holgate during a gale pushing 50 mph winds. It’s too obvious to say it was honking out there so I’ll translate it into a profit angle. Down Holgate way, the wicked winds blew the surface sand away and I was able to tolerate sand blasting to find three nice lost plugs in maybe 30 minutes.

The water went tan then… Continue

SHACK SALVATION: If you take an extended glance over at the famed Old Clam Shack on the Causeway, you’ll see some fresh 2-bys holding up the inside of the decrepit structure. That rapidly placed bracing is the start of what might be the salvation of the renowned landmark -- damn near as recognizable to locals and visitors as Old Barney.
An at-first secretive group of guys is making the first concerted effort to save the feeble failing cedar structure. This overt move – many folks have… Continue

Tuesday, October 06, 2009: waves: Small. Water clarity: Very good to too clear.
Motoring note: For some unknown reason, the DOT is waiting until tomorrow (Wednesday) to put the traffic signals on blink for the winter. Why so late? Some brainless trust must have decided it would be best to extend, even further into fall, the green light/red light thing. Speed limit signs have already been changed over to faster wintertime limits.
Kingfish were still being caught on the beach, though… Continue Here's the view from the oceanfront beach near the Osprey Nest. That is the bay right there. You tell me how long before Holgate is dissected. Sunday, October 04, 2009: waves: 3- to 4-foot east swell. Water clarity: North end of LBI, excellent; middle section; very good; south end ranging good BH to poor in Holgate. The switch to west winds didn’t really take place but the calm air and very mild conditions allowed for a lot of fishing to be done from… Continue The Osprey Nest -- and friends. And I'm having a hard time convincing people Holgate is disappearing. Saturday, October 03, 2009: Waves: Residual 4-foot south swell. Water clarity: Poor along beachfront; decent in inlets and good off the beach a ways. This a.m. saw the streets of Ship Bottom closed to traffic after 2 to 3 inches of rain fell in short order overnight. Lake Causeway formed near Wawa and extended down Central Avenue for many blocks. It… Continue

What a difference a wind shift makes. While a swing to south winds is often a trigger for fine fishing in the fall, today saw way too much of a shift. Winds began honking early on and really cranked up by midday, as waves went fro a tame 2 feet to a nasty 6 foot-ish. Conditions went from fishable early to just too damn wicked. I tried mulleting through the gusts but a lack of sun and finally a ripped up… Continue

Massive clouds of rainfish are just off the LBI beaches. This is way early for this fish-magnet species to be showing – appearing in those big reddish tinged bait balls, actually more like jetty to jetty globs. I’ve seen these baitfish peak mainly in November, when they’re famous for getting big bass so stuffed the gamefish lazily roll in clouds of bait, sometimes indifferent to… Continue