This is a full-blown apology.

Myself, along with a slew of other folks, had dubbed Hurricane Irene as a nonevent, a fizzler of a storm. And, hereabouts, she truly was a lady. However, we somewhat callously – a goodly part out of sheer relief – vicariously ignored, even downplayed, the life-ruining hit many areas of the state took, mainly from flooding. A bunch of Jersey folks…

A Hurry Up and Wait Hurricane;

Birdies Go Bump in the Night

I’ll go a bit storm heavy this week. Admittedly, it wasn’t that much of a hurricane but it sure was one hell of an evacuation.

I would love to get overly critical of some misstep or foul-up from the myriad of emergency management folks but damn if I could find anything that rated less than excellent in the way evacuation things were run. Down below, I will go after the lack of… 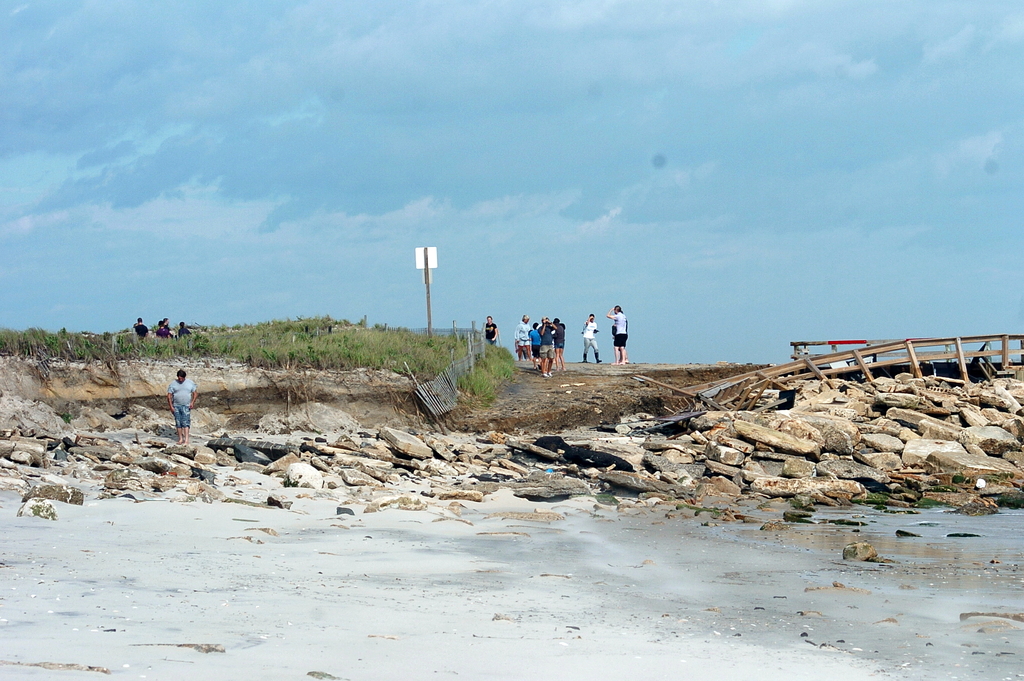 Sunday, August 28, 2011: Holgate entrance is a rock-solid mess. The good news is the rest of the beach, through binoculars, was over-washed but in no way dissected. Obviously, the erosion zones have nothing between frontbeach and bayside meadows. Par for the erosion course.

I saw the Long Beach Township crews grooming the beaches…

Beach Haven report: Talking with George G., he (with great relief) described the damage to the Queen City as, “Not bad at all. There was some washover on a few streets.”

According to Kurt H., those streets were toward the south end of town, where he saw (at 7 a.m.) the ocean water coming over the dunes and down the streets, pushing sudsy saltwater down to the Boulevard. Kurt also felt the damage was bare minimum, adding… Sunday: Diesel spill on Ship Bottom/Brant Beach line could really hang up the bridge opening. Bay water is dropping rapidly. Not that I'm authorized to say so, but the imminent threat from Irene is over. Just beware of loose wires and dangling branches.

Talked with police, they are not in control of bridge opening and haven't heard a thing. I refuse to go as far as saying Irene was a…

So whadda ya wanna talk about? I just did a vicinity check and everything is spot clean, as if had been through a car wash all night. The ocean is the size of the Rockies and dune fence is damaged here in Surf City, where the beach fix was last done. In this case, what might have happened the beach not been that big.

Midnight -- and all is a bit calm

Getting a tad tired. Nothing much since that near-tornadic gust at 9. Seeing more dry lines on the radar map. Outside is just a nor’easter with some added oomph. If I didn’t know better, I’d say this storm is really going south as it’s heading north. If it’s not losing steam, it sure seems to be noncommittal over what it wants to do next, as it lazily rotates off the Delmarva.

10:00: Quieted down drastically out there. Winds have momentarily dropped to maybe 45 mph. Virtually no rain right now, as a dry line passes through.

As the name implies, a dry line is a break in the moisture as it warps around a powerful low. These can sometimes cause a near breakdown of a storm’s circulation.

9:00 : OK, we finally got the look, feel and rock of a bona fide ‘cane. It’s an oddly apocalyptic read, but the last squall rocked this building exactly like the earthquake of old, i.e. last week. I’m thinking 60 mph in a gust. The lights flickered but held their ground.

ALERT: A tornado warning is effect for this area – Beach Haven right about now. I really believe that building rocker I just felt was a possible precursor to tornado conditions. I say that because it has…

8:15 and it sure seems the hurricane has commenced to hittin’, though not quite playing hardball.

For the first time, my third-floor windows are creaking and bulging a bit. The rain is hitting so hard it sound like BBs. (“You’ll shoot your eye out, kid.”)

I’m also hearing the start of those random clunks and knocks somewhere out there, as whatevers blow into other whatevers.

This is B. from North Carolina and I am here in Manahawkin with my family riding out the storm. We just baked 750 bagels for the Southern Regional High School storm evacuees, conditions will make your heart break when you see that many people in one place trying to put a positive face on everything. The crowds of elderly and especially the animals make it real … I hope for the best and we will be back tomorrow giving away any food our company purchased for Labor Day that will probably only…

I hope I haven’t been needlessly shaking all you alert folks by micromanaging the modest pre-storm sky stuff going on.

Yes, there are already squalls and a fairly steady rain; winds are trying to crank it up as we speak, pushing 30 mph, but with very little gusting, per se. Later on, gusts will be the whole name of the wind…

Just talked on cell phone with some folks I know on North Carolina’s Outer Banks. They’re getting slapped about by a bitchy but not, as yet, overly menacing Irene. Of course, they’re on real solid ground – and water from the sound is about to come knockin’. The old man of the house (Pop-pop) is not even remotely impressed. He actually lost his oceanfront home in (I believe) Nag’s Head, years ago. He heard that the well-pilinged houses on that ocean…

1 p.m.: A couple seriously heavy rain bands are hitting LBI. The wind is also acting up, now out of the east at 20 mph and gusty. In fact, it’s as if the storm switch has been hit.

It’s now a bit eerie on LBI. The Boulevard isn’t totally barren but it’s not a good day to have a lemonade stand set up. I have no idea where that came from.

This early showing of rain further points to this storm being a serious flooding hazard. Like many areas of…

Very nice day, thank-you very much. A spattering of people on the beach and few out waveriding, mid-Island, before being chased ashore by beach patrols (only doing their job). The waves are a very rideable three to five feet, fair conditions – but doubt tell anybody I told you so.

The reason we’re not getting bombarded by bomboras (that’s an old Australian expression for huge waves) is the famed Cape Hatteras wave-catching lay-of-land. Hurricane Irene,…

With a voluntary evacuation in place until 8 a.m. tomorrow – when a mandatory one kicks in – a full-blown flow of outbound folks is heading to the mainland from LBI. There is also a fairly steady flow of vehicles onto the Island, obviously driven by folks hell-bent on shoring up their Island properties before Irene kicks into town.

An equally motivated group is mariners arriving in an effort to pull their vessels out of the water. Any boat…

Thursday, August 25, 2011: I used to be nervous, now I’m just amused. That play on Elvis Costello lyrics befit my temperament regarding the final days of Holgate, as Irene approaches.

I’ve tried to find every out possible. Maybe she’ll veer suddenly east – as she, of late, has actually “trended” westward. I tried to mentally telepathize her into merely a rain event, -- as she, of late, has gained in wind strength, meaning the surf is going to be savage. I even flashed back on the…

That Shark was Insane,

Cap Off the Weirdness

What a gorgeous day – but why am I shaking like a leaf? It’s tremor time, gang, Just jump on in and start rockin’.

AFTERSHOCK THOUGHT: Earthquakes are not as much fun as I once thought. Even though the one we felt Tuesday was a glancing shake at best, my third-floor office was swayin’ like a drunken swing set.

When the quake first began, I thought my middle ear…

Saturday, August 20, 2011: I hung out at the docks today – both charter and launch -- and heard about blues and fluke – on the good side of hooking. There was a lotta junk talk, also. The sea robins have moved in pretty thickly and dogs were as numerous as ever.

Not that it’s even slightly news but I had half a dozen folks assure me in spades that they have never caught so many fluke – all undersized, of course. I even got a few “It made it fun” from some less discerning anglers –…