Fluke catching was hot today. I had reports of near nonstop hooking from many sectors. Expectedly, complaints centered on the famed ratio. It is high but still not nearly as untenable as last year. I even had a boat angler out of Barnegat who said he had his allowable bag limit at a three (throwback) to one (keeper) ratio. I marked the drift and worked it until we all maxed out,” he… Continue 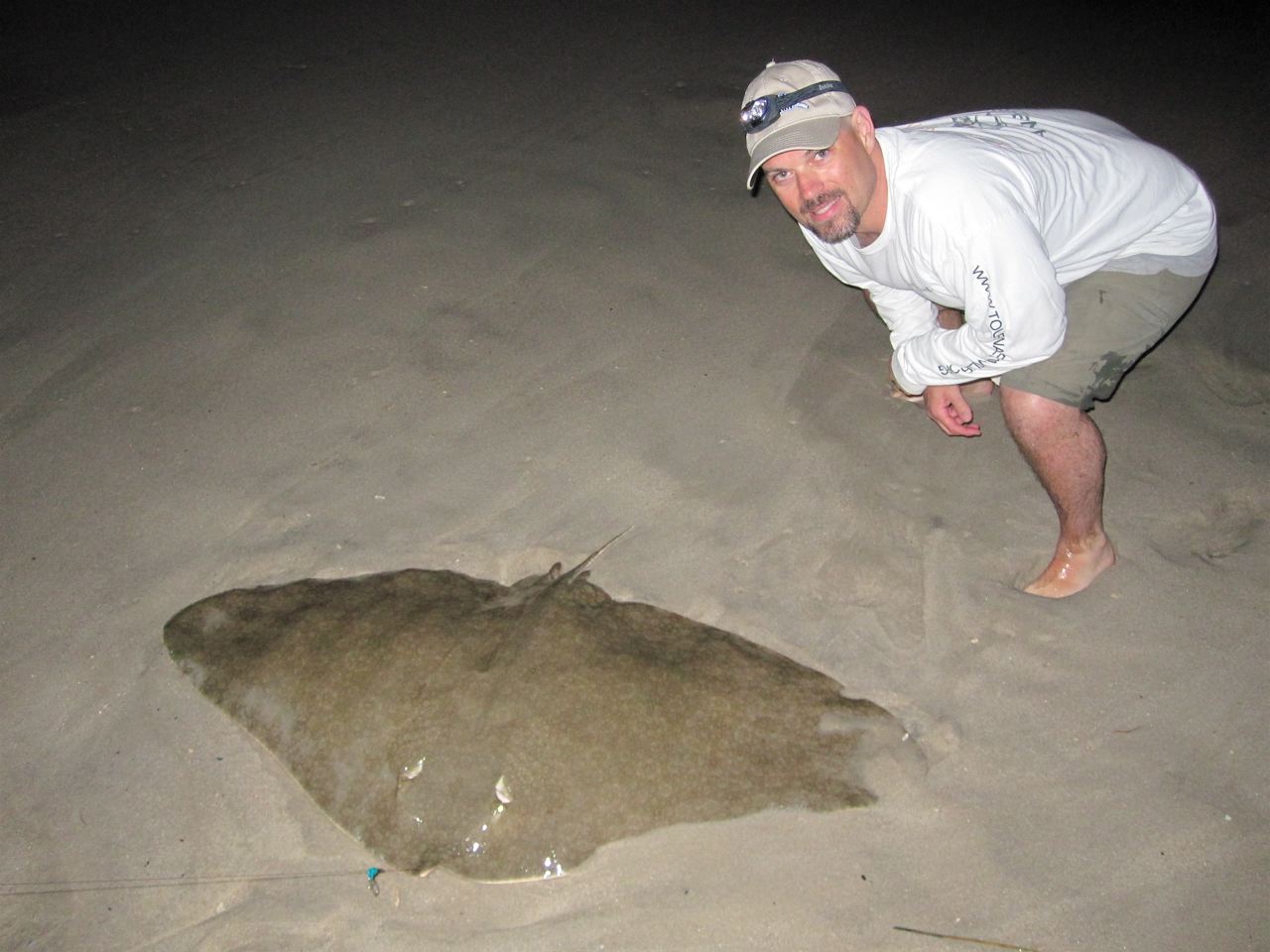 Sunday, June 28, 2009: Waves: Choppy east swell, 2 to 2.5 feet. Winds got very frisky mid-morning and whipped most of the day. Simply Bassin’ 2009 tourney ends today after a long and active 8-week stint. Final tabulation will be made and final leaderboard will be published tomorrow. Despite some 50-pounders in the surf this past week, none of the cow-landing anglers were in the tourney. Missed chance at decent money. I have mainly fluking reports and… Continue

The weekend is trying to shape up. Today’s cranking southerlies were aggravating. The early evening thunderstorm was short but a few bolts nailed mid-Island. I was doing some artwork and a paint stroke now run across the canvas thanks to a blast seemingly right outside by window.

Fluking is going pretty going. Virtually all popular spots are producing goodly numbers of hookups and what I might call moderate keeper ratios. That still only means maybe… Continue

Very high potential for bassing today. Waves are down a bit but still loads of stir and bunker are close to beach but not overly present.

Now and again I get totally overridden by work and more work. It’s often right around end of June as The SandPaper picks up drastically in size and intensity. It’s just such a time – in spades. I mention this since… Continue

Homer, Howard and Clint;
Refreshing Flush for the Bay


Lots of environ and angling stuff to saunter through so settle back in that easy chair, put on a good show – and throw my column out. Just kidding. In fact, turn off that frickin’ fishin’ show. It’s demoralizing. Unless, it’s the brand spankin’ new “Hooked” series coming to the National Geographic Channel, premiering on June 29.
Yes, this series sounds strikingly similar to other currently running… Continue

The most I can offer are some recent hooking tales of bass in the surf, Surf City to be exact. Per usual, patience paid off for a couple folks who went to the leeward side of jetties, accepted undetectable skate hookups and barely discernable dogfish takes, finally meeting up with meat material via bass to 35 inches. Bunker worked… Continue

First a note to mariners that the large swell from yesterday has not dropped all the way down and might pose a significant threat since it might look harmless out there during lulls and then a larger set rolls through near the inlets ( shoals) and things go south real fast. If you’re… Continue

Do you believe this crap? It is purely lousy out there. If you’re not on the Island, there are serious squalls coming off the ocean -- to the tune of an inch of rain per squall. The wind is also honking, nor’east. Then it looks as if all is done and the clearing has begun when it darkens over the ocean and in an instant you can’t see across the street through the rain. Note: Winds switched to the SE midday – and… Continue


Before I edge into angling for the edification of those who insist a “fishing column” should touch on fishing now and again, I have to share a cerebral trip I took back to olden times, when men were men and merry-go-rounds were, apparently, a formidable force to be reckoned with.
My retro-romp began during some deep research on a fellow who made fishing tackle way back in the day.
I’m an avid collector of all things… Continue

There are big bass to talk about but none to write down in the Simply Bassin leaderboard. IMPORTANT: The Simply Bassin’ 2009 tourney goes to June 28, not Father’s Day as I previously wrote. I forgot the event was stretched to accommodate the timeframe, i.e.… Continue

Reports are, once again, all over the board. Primarily they’re not so good, bass-wise. There were take-homes from north, south and mi8ddle but it was a pick per the folks I talked to. Again, it sure seems like resident fish have assumed the position. This is the final week of Simply Bassin’ 2009. It’s gonna take some amazing skill/luck/divinity to best a 50 but it’s not out of the realm.

Lucky June 13, 09: A day to chase bunker and single out doormats

It’s gonna be a fishin’ weekend. Things have come together mighty nicely, weather-wise. Light northerly winds should present no major problems – and hopefully offer enough drift for ocean fluking. Overall, fluking has picked up mainly in the numbers category. You’d be hard pressed not to find fluke just about anywhere near the inlets . Finding that large biomass… Continue

Conditions are a tad pissy out there this a.m. A misty NE wind is riling the surfline, though creating a mighty nice bassing look. The north wind has also egged on the water temps, some… Continue

Well, that wasn’t the best sky move to start a fishing week, especially if you’re one of the many boat folks trying to tap the bayside waters for fluke -- and a newly arriving batch of smaller weakfish. Tuesday saw up to three inches of rain in just a couple/few hours. That’s the worst run-off scenario on the books. When rain comes down like bullets, it literally chips the road pollution right off the macadam. That… Continue 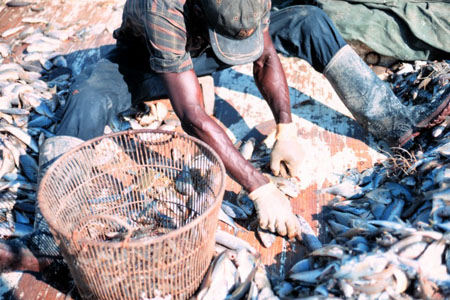 (Above) I have to include this photo. Look closely at this fellow at work. Looks like somewhere in Africa, eh? Fresh fish lying in the sun. Well, not only is it the U.S. but look closely at the huge variety of fish and then into the basket at what the sorter is seeking. It’s a shrimp haul. So much for fish excluder devises at work. That industry is never going to get it. And it’s not just recreational fishermen getting the short end of the bycatch… Continue

It’s pick as pick can on most targeted fronts. For the many flukers, it was easy hooking and fair to terrible keeping. I had reports from folks working near both inlets and it came down to which boats found a batch of better flatties as to who had some meat to show. I had one angler extolling Spro jigs… Continue 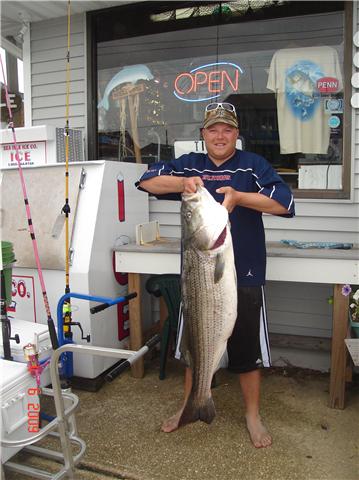 Dante S's bass, see below ... Friday, June 05, 2009: Waves: 2-3 foot building N swell. Current: Moderate (6 oz) north to south. Water clarity: Very good. Obviously, the weather has invited itself back in as a player. It’s not flexing quite as much as it could, wind-wise. Still, brisk NE-erlies have the ocean moving sidewise at a pretty good clip. However, this ain’t bad. It should be short-lived and winds from this direction have something of a… Continue

Nice a.m. conditions. Please email any observations or reports. I have a lot of emails to catch up on. Here’s just a handful. :

“Hey Jay. Fished solo yesterday after work. Had one hit and landed a nice 31 inch striper. Decided to take it home for dinner. Can't wait for that! Winds were blowing about 17 mph out of the SW, waves were about 1 to 2 foot with… Continue

Tuesday, June 02, 2009: Swell: Small south swell. Winds: Swung from light south to light westerly. Water clarity: fair. Water temps: Ranging greatly due to some nearshore upwelling; mid 50s (surf) to mid 60s (out from beach). Conditions to day are damn decent – finally. I’m fully immersed in work but I’d sure like to get out and work some bunker pods then grab a keeper or two on the fluke front.

RE-ALERT!: The IBSP bass bite is fully on again. I expected same – and hoped it would… Continue

Below is a cross section of reports that indicate coolish action. However, I did have a couple verbal reports of some larger rogue stripers in the surf, taken on clams. I’ll check with shops today for weigh-in info.

Hit the water at 5:30 this AM. Stopped, snagged and dropped my way all the way up to the… Continue