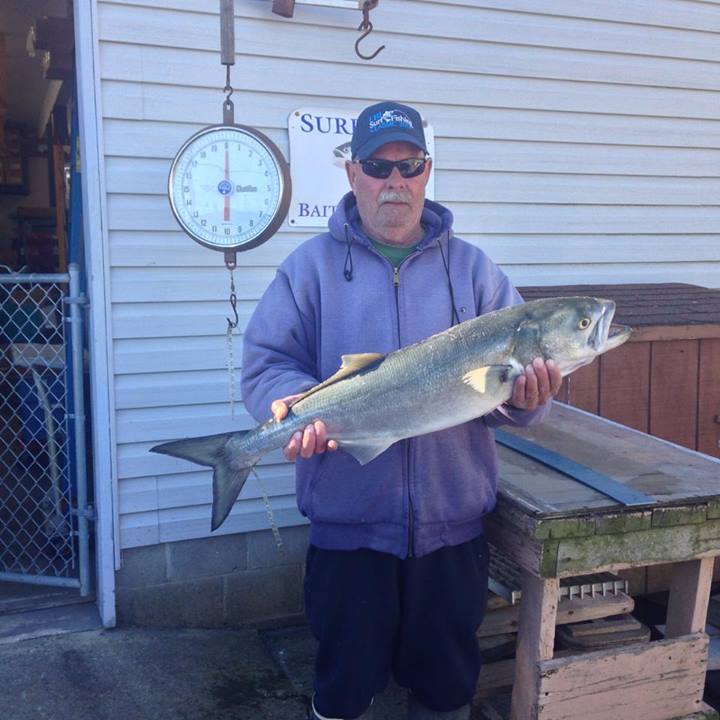 WHAT’S THAT HOOKING SOUND?: Slowly I turn. Step by step I approach. Inch by inch …

That’s how cautiously I’m approaching the possibility that fall bass fishing has taken a turn for the better, i.e. it has, in fact, actually arrived.

I first saw the striper writing on the Facebook wall, as it hosted images and comments of bass galore.

At the same time, shop reports and radio chatter spoke of bass fishing going from fair to good to friggin’ incredible, all on boats. Lots of boats. In fact, more boats than I had ever seen out there. I kid you not. Last Saturday, the LBI ocean horizon was all but weighed down with more vessels than could meet the eye. So, I pulled out my trusty spotting scope in hopes of getting a rough count of how many angling vessels were stretched as far as I/eyes could see, north to south. I would have needed an abacus to keep count. A what!? I don’t know. My thesaurus came up with it.

Undoubtedly, the dead-until-now fall fishing had everyone rushing for striper salvation. We have all been bass starved; skin and bones stripering action. Add to that jonseing factor, the documentable fact that the state has never had so many NJ-registered recreational vessels plying its waters -- many of them brand new, post-Sandy insurance claims. Makes for never-ending fishing flotillas.

As for surf fishing, I’m still not certain that has slowly turned. Just today (Tuesday) I got this encoded report like this from Todd A.: "Attn 2 fish weighed in today in lbi ,and north is killing them ,this weekend in the rain could b it ,those fish should start moving south let's c if I m write."

That jibes with Dante S. and others finally finding surfside striper action with fish to keepability. I won’t dare rain on the arriving bass parade by noting the incoming action sure looks schoolie driven. Sorry, I shouldn’t have even hinted at that end-of-season scenario.

As for the eight-week Classic, it was quite the slow sight; a record-breaking paucity of fish. But there is still time – and now, fish. What’s more, the first bluefish has come to light, thanks to Bill M. (See photo this column.)

As long as I don’t go anywhere near the ocean, the bite just might continue.

The fall run has finally taken off with lightning speed and with that the question out of the inlet is: Do I run north? Do I run south? Or do I go straight out? No matter which way I have turned, or not turned, my plan has been working well within five miles of the lighthouse. After the midweek influx of bass eager to take plastics and live bait, I saw  hungry, mean, hard fighting bluefish enter the scene Sunday.  Most of them were in the 6 – 10 pound range while the bass hitting the deck of the Debbie M have been mostly keepers to 20 pounds.  Right now the bass do not seem to be tightly schooled so my best plan of attack has been to use the birds to guide me to the general location of actively feeding fish and then drift the area while fishing and looking at the fish finder.   If I read fish from time to time I stay.  While drifting I have been throwing BKDs and dropping down live spot with equal success.  Ocean temps are still in the low 50s so there is a lot more to this run before the fat lady sings!

<“ Fish dipped into an STTP solution for a few seconds will retain its moisture.  Fish soaked for a few minutes in the solution will actually absorb and hold extra water.  Ostensibly the dipping is to prevent "Thaw Drip" or the loss of water at the seafood counter, but when soaked, the fish will weigh much more, defrauding the customer who will take it home and cook it, only to discover how much it shrinks.  This "shrinkage" was beginning to burn my butt.  Some seafood will actually retain up to 40% extra water, making that $9.00 piece of fish weigh in at $16.00! It is frequently used on hake, sole and imitation crabmeat.

<“We cut way back on seafood, for 2 reasons: The overfishing problem, and the pollution problem in our oceans. This makes for reason #3 --the chemical treatment of fish.” “This "sttp" when everyone gets wind of it, I hope it goes the way of the pink slime in the burgers.  Puke!”

<“I'm feeling really glad right now that I live near Seattle and can get over to the fishmongers at Pike Place Market fairly easily. While expensive, I'd bet that at least the salmon I get there doesn't have this in it, and probably nothing else does, either. Thank you for a great informational diary. I think I ate some tilapia with this stuff in it at a restaurant several months ago, and this may have been what caused me to become extremely sick afterward. My friend and I had the same thing and we both got sick.”

<“Willamette Valley is close enough to the coast for relative safety... Our main fish source does label both "previously frozen" and whether caught in the US or China.  Guess what we DON"T buy!?

<“There are many legitimate points made here: eutrophication concerns, effects on water retention in fish, etc. But about health effects, I wouldn't be worried. Put this stuff in your body, and some magnesium will replace the sodium, and the phosphate will pick up a proton. You'll be left with a little more sodium along with a dibasic phosphate molecule that will be identical to what your body makes trillions and trillions of every second when it uses energy (the phosphate removed from an ATP).

<“As you know.., I have two great stores that sell fresh fish near my Chicago home.    My local grocery store Sunset Foods, has excellent fish, with a choice of about 8 different kinds of fish a day.   The other store is about 1/2 hour from me.   It's called Fresh Farms, and has 3 stores in the northern Chicago suburbs.   The fresh fish counter there has probably 40 different kinds of fish from all over the world.   Under the name of the fish it shows where the fish came from.   The fish we've been eating is so good, that we've been eating it 3 times a week.

<“About 20 years ago I visited a small scallop processing operation on Cape Cod.

<“ Yes! Dipping is the stated goal, but instead, the scallops are soaked, until they absorb so much water that it is hard to cook them!  Even the fried ones in restaurants seem like a  tiny bit of food inside of a nearly hollow shell. “

<“I can get dry scallops at the Wegmans fish counter, but they are just so doodly darn expensive.  After all this conversation, I realize that they will be lighter, and I will get more than I expect in a pound, compared to the wet ones.”

<“This is like Pink Slime.  Like Pink Slime, the concern really isn't health effects (as nicely stated by others in this comment thread), but instead it is FRAUD.  You think you are buying fresh fish of a certain weight, and instead you get water-logged processed fish with an unpalatable flavor.

<“Our local Publix carries decent fish.  The fresh stuff is "dry" as you mentioned - they are very good about labeling anything that was previously frozen and I avoid it.  I get a great sear on my salmon and trout.  It's pricey, though - $10-15 a pound unless something is on sale. “

<“I can shop at a Wegmans, and they offer some dry fish and scallops, and have been helpful in pointing me toward some frozen fish that isn't processed in China.  Very Pricey !”

<“I have decided that I would rather pay more for better fish and just eat it less often.  I love halibut and red snapper, both of which can get pricey.  I probably would like sea bass but to date have not been able to force myself to fork over $30 a pound for it.   I absolutely refuse to buy Chinese or Vietnamese shrimp.  Gulf shrimp or none at all.”

<“Thanks for the heads up!  Now I understand why the frozen cod fish I've been purchasing looses so much water while thawing!  I just checked the package and it lists Tripolyphosphate as one of the ingredients. That explains why it looses a good 40% of it's weight.