Below: Oh, sure, it was his fault. Dumbass tennis players.

Wednesday, September 20, 2017: Things are settling down, wave-wise. Oh, there are still large wind swells from yesterday’s 30-mph blow but, overall those short-period swells are one-third the size of yesterday.

But groundswell waves will just keep coming, as Jose hangs a mere stone’s throw out at sea, at least as the crow flies. As of this evening, the spiraling bands of Jose’s moisture are showing on the far east edge of the local radars. It’s that close.

Color-wise, the ocean is a turbid, with pretty dingy looking water color and clarity. Things could clear up slowly over the next 36 hours.

TWO TO TANGO: There is talk of Mean Maria coming up the pike, that’s highly likely in a wave-sending sense. Her hitting us is getting less and less likely, as computer projections home in on her likely taking a NNE path, passing us to our east, possibly close enough to send us something inclement, vis-à-vis Jose.

There is some meteorological gab about Maria actually hooking up with Jose. While an interplay just might happen, it won’t become a mega-storm, i.e. no “Perfect Storm.”

If the two were to interact, they could go into a “Dancing with the Stars” mode, pirouetting around in the open Atlantic. I kid you not. Through something called the Fujiwara Effect, two nearby cyclones begin a complex meteorological interplay. It has been known to happen in the Pacific; seldom in the Atlantic.

“The Fujiwara Effect … occurs when two or more tropical systems draw sufficiently near to interrupt each other’s traditional outflow/inflow pattern. Eventually, the upper-level outflow bands of one storm descend, are compressed, and warm up in temperature — soon acting as the inflow of the other. When this occurs, they become ‘pinwheel cyclones,’ and begin rotating around each other,” per the Washington Post. 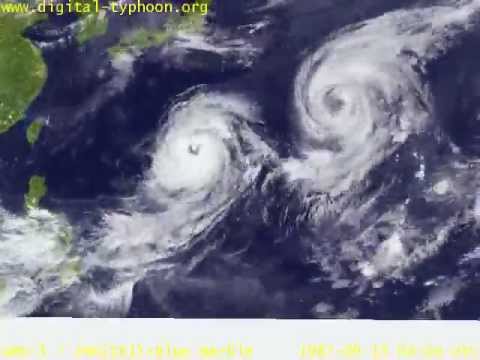 Quickly re-mentioning the “Perfect Storm,” that historic detonation combined the clockwise circulation of wind around an unusually strong west-Atlantic high-pressure system with a very powerful low pressure’s counterclockwise winds – with a static upper-level atmosphere (weak jet stream) allowing both systems to essentially intensify off each other.

Two counterclockwise cyclones come closer to fending off the other’s advances – at least in theory. If we’ve learned anything from the weather over the past couple/few decades, it has tricks up its sleeve that can’t easily be predicted.

Back to real-world thinking, it sure as hell seems we’re in-line to see another prolonged wave bombardment -- for as long as a week’s worth … or longer.

In fact, it could get interesting on the LBI sandbars as Jose keeps popping out a north groundswell, as Maria soon sends us a powerful south groundswell.

Over my lengthy surfing career, I saw many colliding swells. Here in NJ, it was most often a ground swell being hit by a more localized wind swell. It usually made things choppy – and closed out. For Jersey to see two opposing ground swells is a definite rarity – just like dancing hurricanes.

Making it more interesting is how our sand bars are now shaped to accommodate  north swells, thanks to the recent blow. The arrival of counter-sandbar south swells running into the north swells could lead to wave collisions, which sometimes manifest as waves called “A-frames.” Quite challenging.

OTHER STUFF: Enough of that soon to-be stuff and onward to the ongoing lack of mullet.

Firstly, Holgate was buggy accessible at low tide today – despite ocean-meets-bay overwashes during yesterday’s storm tides. There is a real tricky erosion zone about ¾ of the way to the end. That is only passable at low tide. Keep tide charts handy.

A few of us castnetters were in Holgate today with high hopes today would see schools of migrating mullet through the inlet turbidity. It was possibly the worst day yet, at least when I left early -- helped along by black flies arriving on NW winds.

I should note that I’ve also been doing a goodly amount of plugging, which also allows me to eyeball the water for any arriving mullet. I have not had even a frickin’ swipe in days of throwing poppers and shallow divers – not counting baby bumps from millions of snappers. I figured there should be at least a few cocktail blues for making bluefish jerky. They’re likely soon to arrive.

Best catch of the day ANYWHERE!

Kudos to the angler that jumped in to save another angler from getting wash out into the surf. Check out this sequence to see why you need to stay away from the water's edge on days like this. It starts out in ankle deep water where the strong backwash from the sloping shore knocks the angler off his feet and starts to pull him into the raging surf. If not for the quick action of the other angler I would have been compelled to jump in. All ended well, but look at the conditions only a few yards away from where he was pulled out. CATCH FISH BUT BE SAFE!

Wednesday, September 20, 2017: Things are settling down, wave-wise. Oh, there are still large wind swells from yesterday’s 30-mph blow but, overall those short-period swells are one-third the size of yesterday.

But groundswell waves will just keep coming, as Jose hangs a mere stone’s throw out at sea, at least as the crow flies. As of this evening, the spiraling bands of Jose’s moisture are showing on the far east edge of the local radars. It’s that close.

Color-wise, the ocean is a turbid, with pretty dingy looking water color and clarity. Things could clear up slowly over the next 36 hours.

Jose is gone (for now), as is our beach and much of the fencing along the bottom of the dune. Ocean eating away at the dune at high tide, but still mostly intact. Large dropoffs along the entire length. Lots of surfers out of course, nice clean waves today.