Wednesday, September 06, 2017: My sympathy to fellow AD/HD folks in Florida. Nothing is worse for us than waiting ...

Here I only assumed this was inappropriate in the workplace. 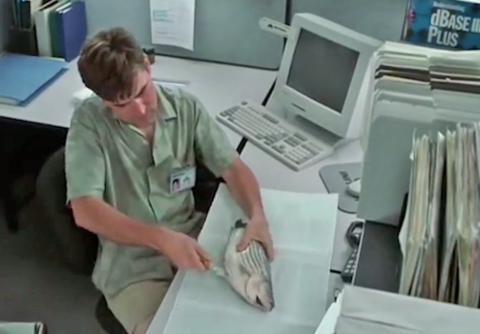 You can see the dog thinkin' "There's somethin' kinda weird about this ..."

Wednesday, September 06, 2017: My sympathy to fellow AD/HD folks in Florida.

I recall the maddening waiting around with Hurricane Sandy, which began rattling my cage as much as 10 days before landfall, via the then-mysterious “European models.” I was first alerted to a potential superstorm from a local surfer who found the European model … and emailed me this huge “L” (low pressure) image with more isobars wrapped around it than I had ever seen. I passed it on – and began waiting … and waiting … and waiting.

For many, even non-deficit types, the waiting for a storm is the hardest part. The storm’s impact is oddly akin to a huge relief, sparking a therapeutic burst of adrenaline. And though a hit is the most dangerous time, at least the frickin’ wait is over … even if things go hideously awry.

As to Irma, the waiting for staying-put Floridians is so thick in the air I can feel it all the way up here. I swear that a big part of the buying craziness down there is just to get out and do something, anything, to pass the time.

Stocking up is also highly advisable for those sticking it out, as the computers have aligned, a bit like the stars did in the old days.

To the relief of forecasters, many of whom began guessing at Irma over a week ago, the long-range guessing has fledged into a genuine forecast, with a high degree of what is militarily called “confidence.” All are now saying that Florida will get hit. OK, so maybe it’s a bit counter-dramatic since it looked that way all along … but now it’s really for real – at least by Friday or so.

Forecasters are even funneling their point-of-landfall predictions to a zone pretty much representing the width of state. Remaining question: Will Irma -- as a low Cat 5 or upper Cat 4 – swing a bit west and hug the Sunshine State’s west coast (lowest likelihood), run up the state’s backbone (moderate possibility), or skirt the east coast (highest likelihood … for now.) That might take until the storm is about to hit to finalize.

With the east coast of Florida holding the high-likelihood hand, Georgia and the Carolinas must gird for what might happen if Irma fails to release her energy on Florida. I see one squiggly, by-itself, computer projection line that hints at Irma’s eye staying out over mild Floridan east coast waters, moving in on the likes of low-lying Charleston (SC) as a Cat 3 … or even higher. Yikes. That potential target was one of my early fears.

By the by: Being a sucker for loner lines, a new long-range forecast squiggle projects Irma going up the Tennessee Valley and then suddenly turning east, heading out to sea … right over South Jersey.

Calm down. Even if that low-likelihood long-shot were to happen, Irma’s remnants would likely be more of a novelty than a nuisance, especially with the dry Canadian air that will have settled over us.

Here’s something odd I heard: Much of Florida’s bottled water and emergency supplies had been sent over to Houston. That makes some sense. However, there is likely enough bottled water in America to truck in tons and tons prior to Friday.

SCAMMERS ECSTASY: While fully and proudly recognizing we have some of the world’s best builders and contractors, who will rush to the aid of those poor souls devastated by storms, I can’t help but negatively focus on the ugly luck of all those stinkin’ scammers, who are now highly polished rip-off experts, learning – and profiting -- from Katrina and Sandy .

I have no doubt these menaces are hungrily rushing toward Houston -- and, likely, Florida.

With literally thousands of homes needing to be built from scratch in Texas – and federal insurance dollars soon flowing freely -- the demand for builders will be insane. Utterly desperate left-homeless folks will quickly forego due diligence, eventually grabbing at any offer to build a house.

This is partially me venting over the number of scammers who successfully fleeced NJ folks after Sandy. Even those who were nabbed received hand slap-ish jail time. Most have already been released. Many are surely bolting straight from lock-up to recently storm-ravaged areas.

Their MO – and I was told this by a “retired” scammer – is to firstly invent a new and catchy company name. After that, a trick of the trade is paying decent money for super snazzy-looking business cards and even brochures. I was also told of scammers who hire “professionals” to build them a fake portfolio of marvelous “completed jobs,” sometimes including blueprints, should a customer want to duplicate a fabulous “completed” job.

I’ll note here that one of the more egregious post-Sandy scammers hereabout was a brother of a close friend of mine. Using his bro’s good name – and a winning personality – he even fooled the hell out of me. I now realize he had the con drill down pat. He went as far as recruiting me to hand out his flashy business cards. In fact, that initial infiltrating of the community, via theatrics, is a key part of a more organized rip-off.

Did I hand out his cards? Gospel truth: This guy’s presentation was so slick, I sensed something was wrong. His brother also clued me in – though he absolutely  was not part of the scam, I promise. I still have that stack of business cards somewhere. Of course, he didn’t need my help. He found plenty of “marks.”

Anyway, here’s hoping that the age of a highly scrupulous social media and computerized police records makes it a ton tougher for these scum to steal the only hope folks have of getting a new home built.

HURRICANE LESSON LEARNED: It was a mere Category 1 Hurricane Belle (early August, 1976) that taught me the oddest of hurricane lessons.

Belle hit the Island with decent vigor, issuing some 90 mph gusts. It was during the storm’s modest eye, that I ran out and scooted over toward the nearby bay and saw a sight that gave me an instant attitude adjustment.

Prior to the storm, I had readied my surfboard for escape duties. I was fully intent on paddling to the mainland if things got desperate on LBI. Hey, I had spent decades in Hawaiian surf. What wave action could measly Manahawkin Bay offer by comparison? Well, my bay look-about rendered my paddle plans an absurd joke.

First of all, the bay waves were constant three-foot pinnacles, bouncing wildly off bulkheads/land … utterly un-paddleable. What’s more, the bay’s brown surface froth was so thick I wouldn’t have made it more than 100 yards before succumbing to an inhalation of gallons of alga-laced foam.

But, the oddity of oddities was the countless drowned and drowning rats and mice in the lathered water. Had I launched my surfboard in an escape move, I would have instantly become refuge for panicked rodents – and, with a wetsuit on, my head would have been the go-to point for all of them. Try breathing through that.

What a way to go – foamed and moused to death.