Check out this young osprey nabbing a meal in Holgate ... 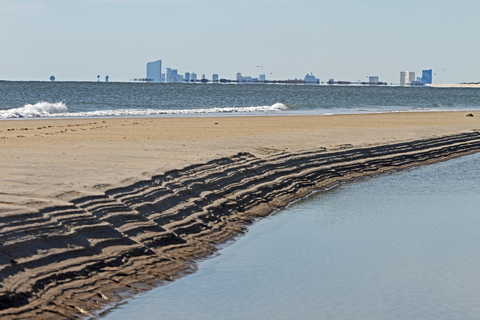 Wednesday, October 26, 2016: Abbreviated report due to high frustration level. After being teased by some night anglers who got a “few’ decent bass using bunker and plugs after dark – way after dark – last night, I was sure there would be some lingering schoolie-grade bass within the daytime system. I hit the low tide beaches and threw, threw and threw. Not even a blue.

Despite loads of fishing pressure – though still far below what we should have during a perfect fishing day in fall – not many anglers were very cheery over how the angling was hangin’.

I did get some amazing bird looks today. The birdplay was nothing I had ever seen before. Again with the “never seen before” but, dang it all, I would remember birdplay like that. Go ahead and tell me “Oh, we see birdplay like this all the time” and watch your nose grow. What the video doesn’t pick up was the sheer racket when the feeding went berserk.

Got hung up for about 45 minutes waiting to get onto the Holgate beachfront, as dredging equipment moved land equipment into place for the rapidly arriving beach re-fix. Apparently Holgate beat out Ship Bottom for the last free sand from the emergency post-Sandy fix. After this, it’s back to the old pay breakdown percentiles of feds 65, state 25, county/local 10. 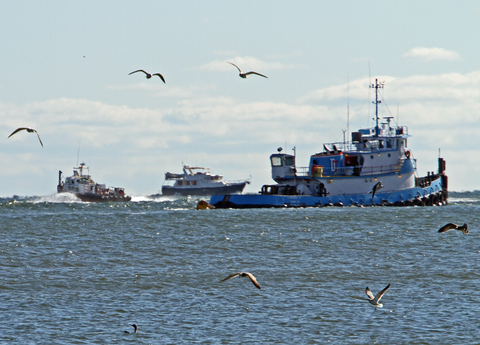 Here's the first phase of readying Holgate for sand ...

So, will the new sand arriving in Holgate even be there for the start of next summer’s swimming season? Get real. That said, I can assure you it will be like manna for the eroded portion of Holgate/Refuge. I’ll even say it’s sand well lost.

I can already hear past-echoes of shallow-thinking naysayers whining that it’s a waste of tax dollars. My head shakes in amazement. This is free sand that is fully funded by the feds and if we don’t use the sand money it’ll go to some fracking study in Colorado. And does anybody believe that by not jusing the money we’ll all be seeing a refund check in mail? You gotta have something against New Jersey  if you’re not willing to accept the no-cost dredged sand promised us.

By the by, I believe there is something profoundly wrong with the beach and dune design/profile of the replenishment. It assigns a far too rapid transition from beach to dunes, leading to the apparent loss of beach. A perfect example is Holgate. The sand distance from, say, the parking lot to the water is damn decent. However, when the beach erodes to the steep dunes – keep off the dunes, dude! – it leaves a look of beachlessness that is deceiving. There is actually a load of beach left – it’s just beneath the dunes. I’m hoping some folks follow what I’m saying.

Don I. and I got out this AM after the sun was up and and spread some warmth. Fished spot on the outgoing along the north Jetty. Had one short and one keeper which we lost at the boat. We also had plenty on unwanted friends, bluefish.
We headed out and up along the beach but there was too much North component and there was chop making surface bait sighting impossible, but I also did not see zilch on the screen below the surface.
Back bay at the launch was 51, ocean off IBSP was 61 WP 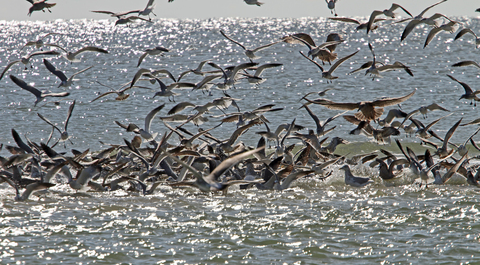 Below: So you think you've seen birdplay, eh? Got you beat. Check out this winged insanity today near the entrance onto the Holgate south end.

Here's a look at the famed Wooden Jetty in Holgate as it prepares to go under again, as new drdeged sand it about to arrive.

When you think you might have a thresher shark, remember the look of this tail of an actual thresher. 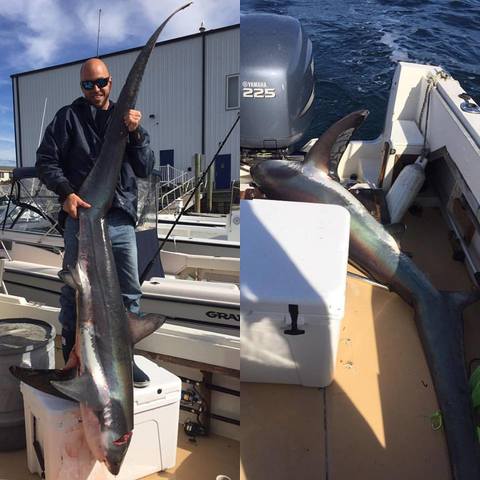 
Bloody knuckles, cracked skin, bass thumb - the wife says I need a manicure. But if that costs more than a package of swim shads or a new Talkin’ Popper, let me say that's REALLY not happening! 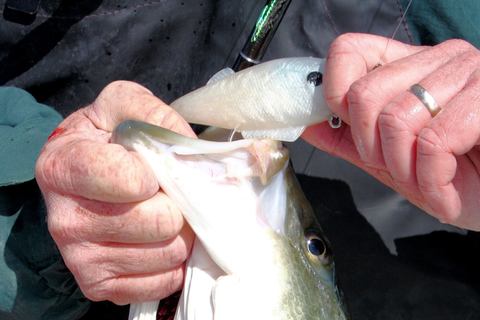 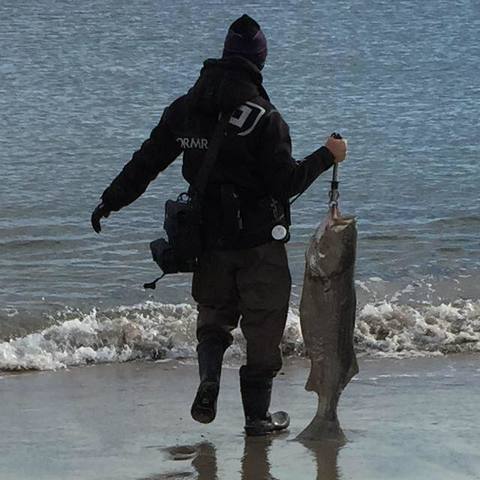 
Absolutely crushed the browns on the Jackall Lures iProp today! Actually broke off a fish that wrapped me around a log in the rapids that was easy 6-7lbs first thing this morning on one of these! 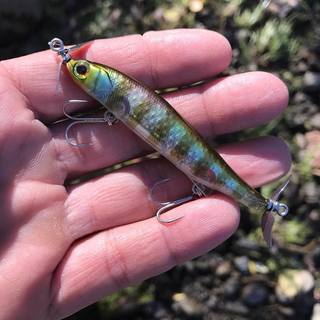