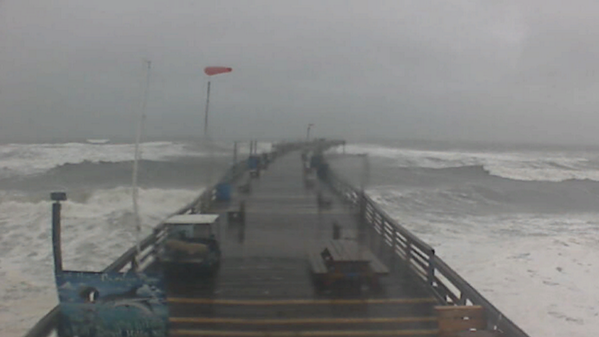 A gust at Duck Pier of 47 mph.RT@MartinMMC:Winds are howling down along the Outer Banks in North Carolina #obwx #ncwx

For a super read on the coming storm, see:

I really like this read (and explanation) of the arriving storm and how it brings in the seldom bandied about concept of Arctic Oscillation (AO), which is often part and parcel to serious winter storms.

The arriving storm looks to be somewhat closer to the more classic nor’easter setups, duration-wise.

Many of us amateur weatherites have long been noticing the lack of good-old three- to four-day blows, the type we steadily knew for decades on end – for me from the 1950s through the 1970s. Mysteriously, those oft-aggravatingly, drawn-out storms came to an odd and abrupt halt in 1980s, possibly in-line with other large changes in the planet’s atmosphere.

This is not even remotely implying we haven’t had wild, woolly and fully-destructive storms since then. On the contrary, we’ve been nailed by killer systems, many with a nor-easter feel. The thing is they have moved through rapidly, often being one-day events. And, yes, that has surely saved our asses on numerous storm occasions. Just imagine if Sandy had dilly-dallied along the coast, just sitting there stacking more and more water along the coast. I might not be writing this from LBI right now. By the by, that Superstorm did, in fact, show signs of stalking as it was about to make landfall. It was then essentially drawn inland by the lack of blocking weather systems.

But back to what the upcoming storm system means. It will have the Boulevard flooding in all the familiar low spots – and few now-and-then spots, i.e. north end of Barnegat Avenue in Surf City and south end of Central in Ship Bottom. In fact, don’t mess with Central Avenue at all if flooding reaches moderate in Ship Bottom.

All this wave action can’t be good news for Holgate, if we’re ever allowed back on state-owned land there. The ocean had begun to crave a cove just east of at the drive-on point. A solid blow could move that eat-away zone all the way up to the fences, though that’s not real likely this go ‘round.

Just as worrisome, the currently easily-drivable beaches from Ship Bottom to Beach Haven/Inlet might quickly acquire an erosional risk factor serious enough to force Long Beach Township to temporarily put the brakes on buggying as public works effects repairs. I’m not saying that’s going to happen but that’s one of those buggers we have to keep in mind during virtually any storm. I’ll note here that had the Island all been replenished, we wouldn’t be sweating out any of this. That island-long beach redo will likely be starting next spring, going from Harvey Cedars to Holgate, excluding only Barnegat Light and Loveladies, though North Beach could play the bitch, even though it was the hardest hit area during Sandy. I don’t know where the heads of those North Beach easement holdouts are at. Oh, wait, yes I do.

The upside to a nor-easter storm is the rapid recovery of the eroded beaches. Significantly, the sand from the beach replenishment projects will migrate southward helping add sand into the system as the beaches rebuild. It’s hugely helpful.

Obviously, I’ll be the eyes and ears of those of you who can’t be here – or are trying to make weekend plans. Right now, I see weather things improving by Saturday, meaning even this system won’t be a fully classic 3/4-dayer. However, huge swells will likely last through Sunday. For you surfing anglers, that is outstanding news. For boaters wanting to negotiate the inlets, you know the truly deadly dangers, with an emphasis on deadly. The boating DOAs I’ve written about are too numerous to easily recall.

But we should talk fish a bit, swimming against the current of the lousy bassing we’ve had along the beaches.

There is very decent bassing inside Barnegat Inlet, including from some BL docks and bulkheads. I’m thinking The Dike might be hot. Bass and blues caught there ARE eligible for the LBI Surf Fishing Classic but please (!) find witnesses to any scales-bound catches made there – or from any out-of-the-way beach or bank fishing holes. I’m part of the confirmation committee and we do check ALL Classic fish closely. It makes the event that much more proper. For any big, i.e. glaring cases, we have a polygraph expert on-call, a common practice in virtually all tournaments around the nation, from freshwater to oceanic big game. The polygraph thing will also allow event’s like the Classic to consider hiking prizes way up, soliciting greater participation. You likely know that in the early (1954, 55, etc.) “Derby” days of the Classic, grand prizes included fully-loaded, brand new vehicles, like a Jeep Wagoneer – the equivalent of a $50,000 SUVs today. That might explain the 2,000 signups.

Heads up....Long duration wind event on tap with northeast winds through Monday. Tidal stacking and subsequent minor to moderate flooding is a sure bet as the bay has been running full already, be aware and prepare if needed. I have said many times it's not necessarily the events like Sandy that are well covered in the media that can get us.

Couldn't Escape this afternoon.. but went for a quick fix tonight

PEOPLE ARE GREAT... 3 weeks ago in a spot very dear to me I loost a nice sweatshirt... well tonight.. hanging in a tree ..there she BE... my sweatshirt... PEOPLE ARE GREAT!!!!
couple shots .. of a couple fish! or 3 or 4.. beautiful nigh didn't fish long... dead drift ..did it! I was very slow on the strike tonight..
another poor hit to stick ratio... too busy Night dreaming!!!
Did I mention I love this stuff???

Its Derby time! She's signed up and wants to take your money!