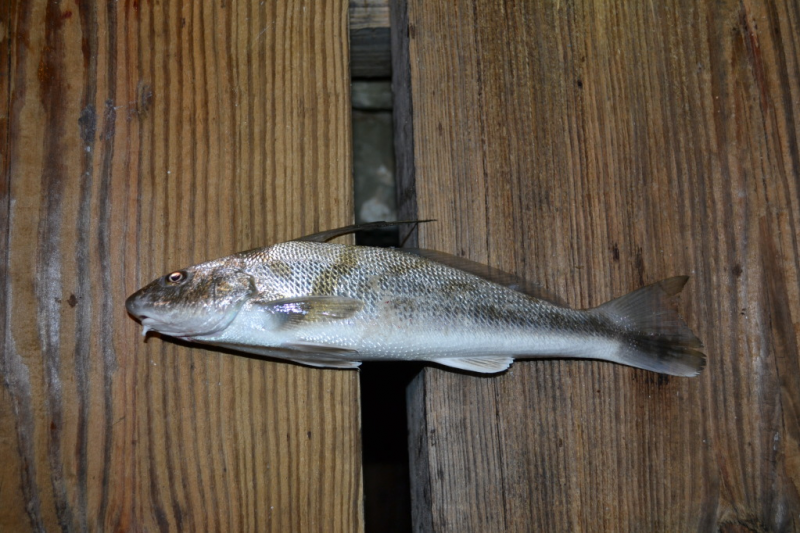 Wednesday, October 03, 2012: Weather is dank and very unseasonably thick, as in muggy. Any sun and we’ll be hitting 80 degrees and up. This just means a longer cool down period for the ocean, which responds to ambient air temps.

A somewhat expected push of large kingfish has moved into out waters from the north. These are near jumbos and in goodly numbers. Currently, the main angling zone for kingies is the north end. However, these fish tend to move to the south end of the Island fairly quickly, where they muster -- meaning they stop, feed heavily and ball up.

Weeks back, I had gotten reports of exceptional kingfishing to our north, thus this current LBI showing matches migratory timeline of those reported fish. Not much behind them, though. There are also jumbo blowfish, somewhat mixed in with the kingfish, though not in the same schools. When chum or lone baits are dropped, the two separate groups readily mix together to feed, neither posing any threat to the other. Small black seabass are also coming into to hooks with pieces of bloodworm or fake-o bits.

JERKY Attempt: I did up a batch of bluefish jerky. And I fouled up a bit by experimenting. Instead of making a thick liquidy marinade to soak the carefully sliced bluefish pieces (of similar sizes), I went with a “dry” method I recently read about. It’s not so much “dry” as oily. A mix of olive oil and a few dashes of sesame oil are mixed with a myriad of strong spices.

I used Bay Seasoning as a spice starter and added the likes of minced ginger, minced garlic, powdered mustard, celery seed, finely sliced green onions, low-grade chili peppers (too hot will ruin the batch for those of us with low tolerance for capsicum), small dashes of liquid smoke (organic), pinch or two of sugar, tablespoon or so of Worcestershire Sauce,  a dash or two of Tabasco – and some magic stuff, but not too much magic stuff.

The spices are usually mixed with a cup of wine along with oil, enough to totally cover the bluefish strips. As noted, I went with the dry method, literally hand mixing the fish, oil and spices for a solid couple minutes.

In both styles, the bluefish is then refrigerated overnight – but no longer. If marinated too long, the powerful spices can actually cook the bluefish and fully ruin the jerky.

My dry marinated meat was then placed inside my commercial fruit dryer. Even entry-level Wal-Mart type fruit dryers work fine.

I stacked three layers of strips, making sure each piece did not touch another. Giving each bluefish piece its own space allows the rising warm air to properly pass by.

I tasted it this morning and it is very good but kinda mild. It’s usally an explosion of flavors. Still, i’ll surely get devoured by some jerky fans I know. However, I’ve learned how much the liquid marinating allows the meat to fully absorb the spice flavors. Looks like I’ll have to nab some more bluefish “volunteers” today.

GOOD BUGGYISTS AND BEACHERS: I don’t know if it’s wider beaches, better behaved buggyists, nicer beachgoers or a little bit of all those but I haven’t received a single complaint from beachgoers or buggyists regarding conflicts.

It’s always a tad humorous when irate beachers make a call to The SandPaper in general -- to complain about vehicles bothering their beach days – and they get me!

Oh, I stay very polite but I also get to offer the details about how we do things around here when tourists leave. Sure, I get the “We own a home here” line -- all the frickin’ time. Those folks don’t carry that “local” homeowner angle any further when I ask what town their driver’s license says they’re residing within.

Anyway, some falls I get as many as a dozen calls or emails from bothered beachers – and, admittedly, a few equally bothered buggyists. Nary one single complaint has arrived so far – and beaches were packed throughout September.

Potentially the most ticklish area where buggyists meets beachgoers is the ramp on and off Holgate. To the credit of buggyists, the politeness has flowed like wine, as we have all been backing off to allow plenty of time for folks to either step to the side of the ramp or, in some cases, slowly finish their ramp walk. I’ve even felt bad a few times as really old folks get halfway up or down the ramp, see my vehicle and try for all they’re worth to speed it up. I’ll even yell “Take your time.” Then mumble to myself, “My CPR sucks.” Summer flounder fishing has ended for the year in New Jersey, but big black sea bass are filling the void for the boats of the Beach Haven Charter Fishing Association.

Captain Carl Sheppard had Boy Scout Troop 65 from Haddonfield out for a bottom fishing trip last Saturday on the “Star Fish.” The boys and family members managed to catch over 250 black sea bass in just 4 hours of fishing. Despite a stiff Northwest wind, the boat rode comfortably once anchored up.

Fish were caught as soon as the lines hit and water with a ratio of keepers of about three to one. In addition to the sea bass there was a good showing of triggerfish. Captain Carl advised his anglers to keep a hooked trigger in the water as often the rest of the school with swim with the hooked fish making them easier targets. An extra excitement was proved by some feisty bluefish up to 2.5 pounds which provided more thrills for the scouts.

Captain Fran Verdi on the “Francesca Marie” had a group out for some black sea bass fishing on Friday, and they limited out on sea bass by 11am and also boated 8 triggerfish. Captain Fran had to work to find where the fish were located, but once he got set up, it was drop and reel fishing. Usually they could not get the baits to the bottom before the fish hit.

Captain Fran reports he is getting anxious for the striped bass to arrive and feels the action should be starting in another week or so. Until then he plans to fish for sea bass. He has heard of stripers being caught off the sod banks late in the evening and early in the morning.

Captain John Lewis took the “Insatiable” offshore last Sunday for a day trolling trip due to the slow chunking so far. Despite a favorable forecast by the weather man, strong winds and high waves made fishing offshore very difficult. Despite the conditions, the party managed a white marlin and a 20-pound mahi-mahi. Ironically, the talk on the radio was of a good night chunking with several boats actually limiting out on yellowfin tuna 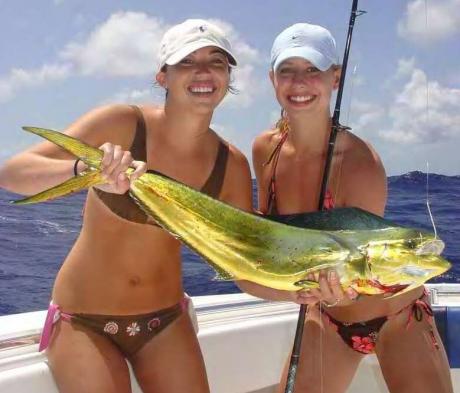 Hoping to extend your life? Eat more cold water fish such as tuna or salmon and consume less corn oil.

According to new research out of Ohio State University, in the category of omega fatty acids, you're advised to take more omega-3 and less omega-6, those fatty acids derived from such foods as corn oil, sunflower oil and safflower oil.

Ohio State scientists are convinced Omega-3 fatty acids, found naturally in certain fishes as well as in dietary supplements have a restorative effect on ever-shortening telomeres — those DNA sequences that are known to diminish as we age.

Ohio State clinical psychologist Jan Kiecolt-Glaser, lead author of the study says, “I've spent many years studying the relationship between stress and immune function. And I became interested in how nutrition might be a factor there. The omega-3 story is one of the most compelling stories in terms of some of the immunological effects — particularly their anti-inflammatory effects.”

While she appreciates the science community comes to different conclusions on the benefits of omega-3, Kiecolt-Glaser believes the anti-inflammatory properties in omega-3 fatty acids help preserve the length of telomeres. Inflammation speeds up cell division which is linked to shorted telomeres.

The ratio of fatty acids in our diet is out of whack, says Kiecolt-Glaser. “Those vegetable oils only really entered our diet in the early 1900s and that's when the omega-3 and omega-6 ratio which people thought was two or three to one rose to its current 14 or 15 to one. Omega-6 is important but we have so much of it in our diet already,” she says.

“The idea is that each time a cell divides the caps at the end of the chromosomes shorten. The analogy I've always heard is that it's like the cap at the end of a shoelace. If you lose the cap on that shoelace, it's a non-functional shoelace.”

According to Kiecolt-Glaser, “you really need the telomere cap on the end of the chromosome to maintain its stability.

Shortened telomeres have been linked to mortality as well as a variety of diseases, she says.

For her study, Kiecolt-Glaser isolated a specific group — older, perhaps overweight, generally inactive people who were otherwise in good health. She wanted to separate her study from others that investigated the effect of omega-3 on young and healthy people, who don't have, “a good background for inflammation.” As well, she didn't want to include people who were unhealthy and on multiple medications, which might muddy the results.

For example, a study of 70,000 patients published in the journal Science Daily, concluded that omega-3 supplements were not associated with, “a lower risk of all-cause death, cardiac death, sudden death, heart attack or stroke.”

Kiecolt-Glaser distinguishes her research, which specifically looked at the effect of altering the ratio of omega-3 and omega-6 in a particular population, from other studies.

“If you already have a healthy diet then the effects of omega-3 are going to be much less visible. One study was out of Japan where people already have a healthier diet than we do. They also have a heck of a lot more fish in their diet. The boost you would get from additional omega-3 would be a lot smaller.”

Kiecolt-Glaser believes such nutritional interventions could lower the risk of diseases associated with aging, such as coronary heart disease, Type 2 diabetes, arthritis and Alzheimer's.