Wednesday, November 27, 2013: Winds are very testy this a.m., much to the chagrin of boaters who enjoyed yesterday’s glassiness. The wind should be backing off by day’s end but as of midday it hold NE at up to 15 mph.

Surf fishing is slow. Big surprise. Some schoolies and a few keepers are happening but considering the heavy fishing pressure it was slow – as it is this a.m. There are mainly  bait fishermen now, likely due to the chill involved with prolonged plugging.

I’m trying to make an actual vacation out of this holiday weekend. I took a short respite from Facebook and such.

As much as FB is a blast to keep up on people – and what some people are catching -- there’s also an increasingly demanding side to this social media family, including folks you had barely known but have now sort of adopted like new family members.

I have to admit that the extended Facebook family offers an odd, hybrid option to the old saying. “You can choose your friends but you can’t choose your relatives.”  For the many who take their FB families seriously, you do have the option of choosing your relatives – and, if need be, de-owning them, via de-friending. It takes a lot for me to hit the “de-friend’ button. It takes all types to make a family. It can get kinda exhausting being a good FB friend.

I bring all this up since FB this fall has been an astounding source of angling data. Making it an even hotter source of info is the pervasive use of photo evidence. Photos don’t lie – though they have been caught fibbing (Photoshop) on a few occasions.

Anyway, hopefully some regular readers of this website will “friend” me on Facebook – or get on it if not already there. The best way to get to me is to write “Jay Mann” in the box at the very top of the FB homepage, where it says “Search for people, places, things.” There is apparently more than one of me so look for the one related to NJ. No, I am not the African-American Christian Scientist who likes smoking Cheroots.

I’m trying to get a video capture of the snowy owl hanging out in Holgate. We had one a couple overwinter there a number of years back and also one that touched down when heading over to the Little Beach area to overwinter. This current one might be the one heading south so time is of the essence. They eat mice and also, when necessary, smaller birds. I know this from taking apart the boluses left behind by previous snowy owls. The weird thing about these huge owls is their varied personalities around humans.  The first one I ever saw was standing nonchalantly on a berm near the water. I at first drove right by, thinking it was fake. I was a solid 30 yards past it before it registered, “That thing was frickin’ real!”

I backed up and got even with it, stopping no more than 10 feet from where it was perched on the sand. Even with me all but on top of it, the raptor just sat there, cool as snow. I even tried talking to it. I said, “Do you know Megan?” It said “Who?” Oh, you’ve seen that commercial, eh?

I had no camera with me

at the time and drove on, sure I could get a startling close-up the next time I drove in the area. That bugger stayed all winter but suddenly became so gun shy, nobody could get real near it. Then, here I’m fishing one day, walk back to my truck and the owl was majestically poised on the sand, spitting distance from my buggy. I first thought there was some sort of bonding thing going, like it recognized me from that conversation we had on the berm, however, some other anglers reported that had the same white owl do the same nearby landing thing. Weird.

Seals are seemingly increasing in numbers at the Rip in Holgate, though I’ll still stand by the premise that is might simply be a couple/few very active ones. They’re all harbor seals, to this point. Somewhat oddly, yesterday I saw two hanging steadily just off the west point, right where tons of boats were coming and going. They didn’t seem overly concerned with the boat traffic. Maybe they were on a good bite. Not sure about the boats. 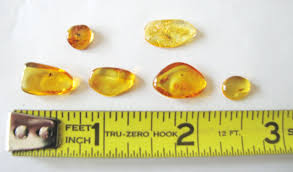 Utterly weird beach-pickini find yesterday: A very nice pebble of amber. And I do know amber, having been one of  the prime (multiyear) diggers of the famed Cretaceous amber pit in Sayresville, NJ. I have also traveled far and wide digging amber.

My nickel-sized find was minuscule compared to the fellow who found a volleyball-sized piece of amber up near Monmouth Beach a few years back. That monster chunk of amber was found amid sand being dredged on the beach from a mile out. My piece was also likely a replenishment artifact. I haven’t had a chance to open a window to look inside my amber pebble.  That’s a procedure where you sand and polish a section of an amber piece to look inside for what are technically called inclusions. They can be anything from vegetative matter to – the ultimate – insects. The thing with NJ amber is it is often 92 million years old, meaning any insects are almost minuscular, requiring a 20-power microscope to view properly.

(I’ll put a photo up when I clean my recent amber find.)