Wednesday, November 19, 2014: For those of you who hid from the apparent coldness today, it was actually gorgeous out there.

Wednesday, November 19, 2014: For those of you who hid from the apparent coldness today, it was actually gorgeous out there.

After getting a new truck battery this a.m., I headed to Holgate, where I found squatola happening on the fishing and birding fronts. Even the resident snowl was nowhere to be seen, though I wasn’t lookin’ all that hard. My Zeiss binocs never left the case. Besides, if you’ve seen one snowy owl you’ve seen them all – and even after seeing them all, they’re a total sight to behold, even for the 50th time. Two eagles have been toying with Holgate, stopping by now nd again before heading to the nearby sedges for a more relaxed perch-about during wind and cold.

I did hit upon the highly predictable blow-out tide now showing full-force. So I did what any good Holgater would do in that situation, I clammed.

I no longer drive back to the mudflats to clam. It makes no financial sense to do a mudload worth of damage to my vehicle for ten dollars’ worth of clams – though they are the best clams on the planet and beyond.

Since I’m a hiker at heart, I readily walk (and slide) back to the flats, usually in short order. Today, I sure didn’t have to slosh very far. There were clams showing everywhere, via “keyholes," technically syphon holes. I found upward of 75 steamer-sized clams in a small stretch of mud, mainly in the zone that seldom shows except during blow-outs. 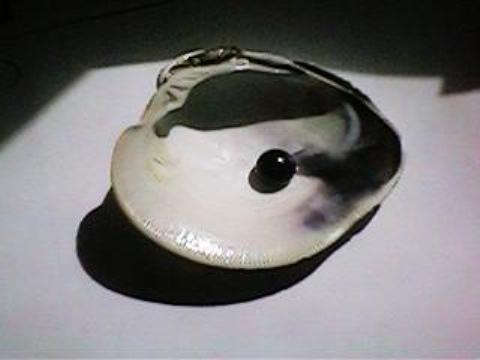 My prize, potentially, was a highly misshapen larger chowder clam. Previous shell damage can mark clams with pearls inside. While I’ve never found anything but small clam pearls, a late buddy of mine (Mikey F.) owned a large, amazingly deep-purpled clam pearl. I’ve never seen a larger one.

Are clam pearls valuable? Yes, no and maybe. I’ve heard of larger Mercenaria mercenaria (scientific name for American hard clams, a.k.a. quahogs) selling in Japan for more yens than you can shake a samurai sword at. One smaller than Mikey’s went for $10,000.

Below is a professional’s read on rating a clam pearl. But I’ll first note that pearls from Jersey quahogs are also rated on their purpleness, with pure purple (consistent throughout) being worth the most. However, I’ve seen purple and white (swirled) hard-clam pearls mounted and going for many hundreds of dollars. In fact, there is an Asian demand for colorful NJ clam pearls providing you can show the history/pedigree of the clam the pearl was in. That can be done by photographing the clam ahead of time, during its cold opening and the revealing of the gem inside. I’ll repeat that a larger clam with a once-mangled but healed-over shell is the one you want to keep the camera rolling upon as it is opened. 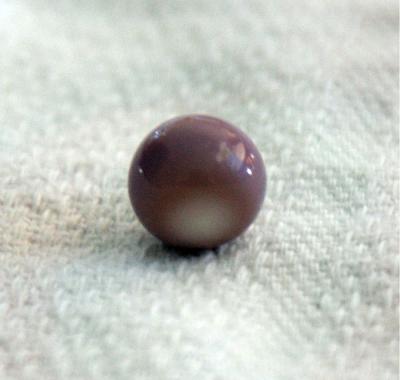 As you’ll read below, you really shouldn’t boil a clam that might contain a gem, for fear of messing up the surface of the pearl. That said, Mikey’s amazing clam pearl came from a boiled clam but still came out of the heat in perfect condition – as have many other prime clam pearls I’ve seen in recent years. Still, I sure as hell wouldn't want to accidently cook a clam pearl that might be worth a bundle. Here is one set of criteria for rating clam pearl:

1)   Was the pearl found in a cooked clam (baked, fried, steamed)? A "cooked pearl” can lose its value because it loses its beauty when damaged by heat.

2)   The species that produced the pearl (its proper or scientific name): Most clams do not produce “true pearls” but instead produce "calcareous concretions" which have no real commercial value.

3)   Size and weight of the “pearl”: pearls have a greater value after attaining a minimum size (5 mm) or weight (0.5 g); if the weight/size is lesser than this size-weight, then the economic value is not very significant, but: You have have found a pearl! You’re lucky: natural pearls are rare.

4)   If the pearl is nice and large enough, you can have a jeweler incorporate it into a ring or pendant, as an "accent" for it.

Backing up to Number 2, as noted, our hard clams are Mercenaria mercenaria. That is the best clam for quality pearls. As to that Number 4, having the pearl placed into a fine mount can maximize its value – and display ability, though the Asian market won’t touch a mounted clam pearl for fear a flaw has been hidden beneath the mount. NEWSER) – A Florida couple found an extremely rare purple pearl in their steamed clam dinner that could turn out to be worth thousands of dollars. The two stopped for seafood at a local restaurant when the man bit down on something hard in one of his middleneck clams. When cleaned off, it turned out to be a small purple pearl.

Purple clam pearls are exceedingly unusual and some have been valued as high as $25,000, though an expert guesses this one is worth more like $1,000-$1,500, based on a photo of the find. The diners are having their pearl appraised and say if it's valuable they'll sell it and use the money to retire early or help animals.

It's rare to find a pearl in a clam, much more so than in an oyster, but that's exactly what happened to Danny Wyndham of Huger some 40 years ago.

He's held on to the clam pearl all these years, showing it to a few people, but mostly keeping it to himself. Wyndham and his late wife talked about making it into a ring for her, but that never happened.

Now, on harder times, Wyndham wants to know how much the pearl is worth. His retirement investments took a beating in the stock market. At age 63, he is going back to work harvesting clams behind the Isle of Palms and Sullivan's Island. "Any offer I would get for it, I would probably sell it," Wyndham said.

He found the clam with the pearl inside near Bull's Bay while digging clams for his supper. He said that he also found a mastodon tooth that way. He plans to go to New York City in the near future to have the pearl appraised. Wyndham said he has never found another clam pearl.

Antoinette Matlins of Woodstock, Vt., author of "The Pearl Book: The Definitive Buying Guide," said the value of a clam pearl can range from negligible to six figures. She said offering the gem to a natural pearl dealer would be a way to test its value.

She said the so-called quahog pearl in clams is quite rare, but the condition of the gem is what determines its price. "It's one of the rarest and most precious gems when it is of good quality," she said.

She said the gem that Wyndham found sounds like a "button" pearl because it is round on the top and flat on the bottom. They can be used for rings and earrings, she said.

Although there are no hard figures, it has been estimated that the odds of finding a clam pearl are 1 in 50,000, compared with 1 in 25,000 for an oyster pearl, Matlins said.

"It's extremely rare. I've never heard of a pearl in a clam," said Bill Anderson, director of the shellfish management section of the state Department of Natural Resources.

The quahog pearl is unique to American waters and found in the Atlantic ocean.

Wyndham, who was born and raised in Awendaw, said he didn't want to reveal the exact location where he found the clam with the pearl inside. He would say only that it was found on a tributary of Bull's Bay about a mile from the bay. He has kept the pearl under lock and key all these years. "I've never found one since. I've looked at many a thousand," he said.