"Officer, I know my rights and I don't have to roll down my window ..."

Making America great again ... one window at the time.

I did the long Barnegat Light south jetty walk, casting the entire way. Saw a goodly number of folks fishing, most trying for blackfish ... regardless of size.  Some things never change in the state park fishing realm. However, there was also a load of pluggers toward the east end and around the bell/horn buoy. The short of it was nary a fish taken before I got there (asking around) or for the couple hours I was there. One fellow said he had a fish on. Likely an hallucination.

I should mention that the inlet water was crappy, lo-viz. That’s very unusual for that waterway, which is usually immaculately clean. Also, there were some serious wavs breaking in the middle of the inlet. I don’t know if any dredging was done there last summer.

Below: A small craftperson gets a bit spooked as this inlet wave moved his way. Here are some BL shots I took:

Fishing from the hatch. Looking for bait under rocks. Local crabs work best on local blackies. 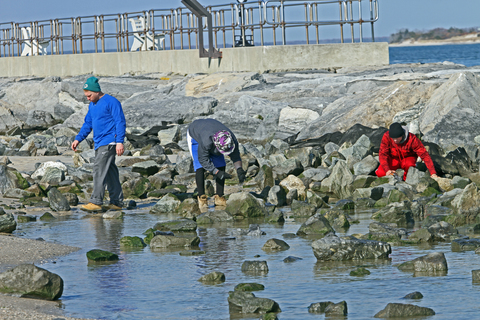 On the South Jetty, it's always a challenge getting back to concrete. These brant know how to avoid the hunters over on the sedges. 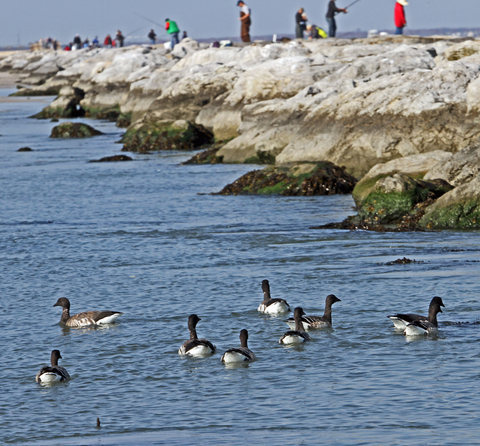 I did some beach driving and heard of squat being caught. Hey, I'm a rapper.

My daily Holgate drive was interesting despite being utterly fishless.

Not that there was anything to see at the Rip. Oddly, there is no Rip, per se; no deeper water close to the beach inside the hard outgoing water.

The end of the replenishment is at hand there. What was interesting is how far south they’re seemingly going. Where the work stopped at Wooden Jetty last time, dozers have plowed the beach past that point; right down to the state beach adjacent to the north boundary of the refuge.

Crappy video of the Holgate work ... it gets the idea across. 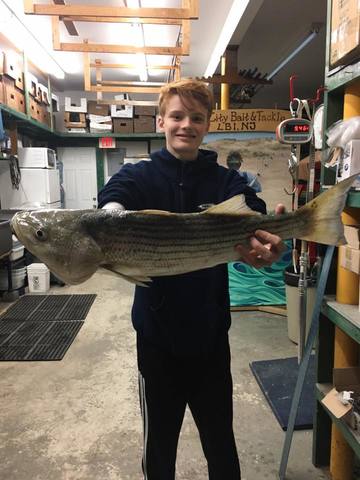 The weather is turning cold, and the holidays are coming one after another. This is not the time, however, to forget about fishing. The captains of the Beach Haven Charter Fishing Association are still ready to finish up the 2016 fishing season in high gear.

The tautog, or blackfish, daily bag limit is now up to 6 fish. This new daily quota will remain in effect for the rest of the year. In addition to some of these crab eating monsters on the inshore wrecks, there are still good numbers of black sea bass itching to be caught.

The striped bass action continues to play out on the entire length of Long Beach Island. As has been the situation for the past couple of weeks, the linesiders are being caught principally by “snagging and dropping” live bunker from the bunker schools and by trolling. The most successful trolling has been with bunker spoons.

Most captains start their day working their way in close to the beach looking for the bunker pods with bass under them. If that does not produce action, then it is further east to deeper water to drag the spoons.

Captain Fran Verdi had the “Francesca Marie” out earlier this week and headed north of Barnegat Inlet.  When he found the snag and drop action to be unproductive, he quickly moved to trolling. His party picked up five big bass in just an hour on the spoons.

Addition information on the Beach Haven Charter Fishing Association can be obtained by going to the Association’s website at www.BHCFA.net. 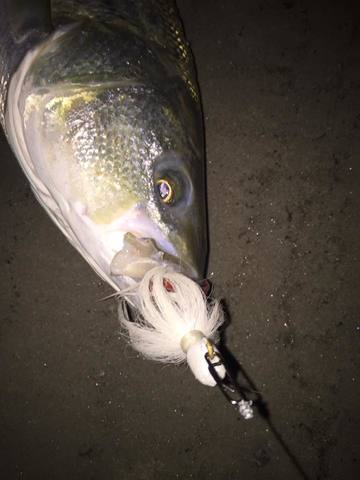 Took another shot at fishing Holgate this morning on a high tide. A first for me today not one crab ate my bait or anything else for 4 hrs. I feed the remainder of the one bunker i had to the gulls. My guess is it has something to do with the pix of equipment at the suicide jetty at Holgate. The tide was running high with a lot of overwash. The ram was really working on the ride off the sand that was soft and wet. 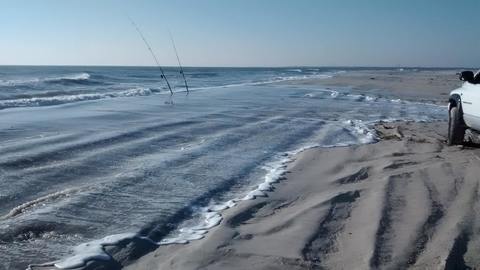