So polite: "Excuse me. Pardon me. Coming through."

Below: A Hatteras low like this has to send some waves, right.

Wednesday, June 01, 2016: The ocean is so fine … when you can see it. The fog has been toying with the coastline all day, as cold water and warm air play cat-and-mouse.

Winds are light out of the NE but not blowing hard enough to clear the air. The winds look like they’ll stay light all day and into tonight, despite forecasts for brisker conditions.

You couldn’t ask for better bay fishing conditions: sunny and mild. SPF 9. Those conditions invite fluking (a slow go) and even some bassing over toward The Plant, Oyster Creek.

Bluefish have been running as much as a mile in-bay from the inlets. Occasionally birdplay shows their whereabouts, though it is little more than a few terns picking. Much thicker birdplay comes and goes inside Barnegat inlet, when the blues are down below. That sight is more common on outgoing. It also seems to be more prevalent over that overgrowing shoaling running east-to-west down the middle of the inlet.

Below: I thought this jerry-rigged set-up was laughable when I saw a jetty caster rigging it up to get further out to where birds were working – but damn if it didn’t work. It cast a mile and he was attracting blues on every cast, though missing quite a few … likely because even the blues weren’t sure where the hell to even grab the weird thing. 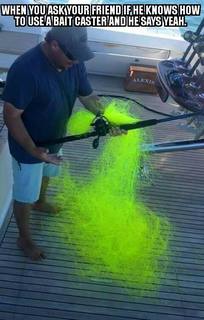 Below: This segment from a United States Geological Survey press release is a bit interesting from both a maritime angle and a big gamefishing angle. There are also implications for commercial fishing. Unfortunately, it also hits close to the sea-bottom resources side of things, i.e. petroleum and natural gas.

“International law affords every coastal nation sovereign rights over its continental shelf out to 200 nautical miles from shore. These rights include control over minerals, petroleum and sedentary organisms such as clams, crabs and coral. If certain physical criteria are met, a nation is entitled to the continental shelf beyond 200 nautical miles, an area referred to as the “extended continental shelf” or ECS. The USGS is analyzing geologic and geophysical data collected over the past 7 years to determine the nation’s ECS, and preliminary research indicates it could total one million square kilometers. The United States has an ECS in the Arctic Ocean north of Alaska, Atlantic East Coast, Bering Sea, Pacific West Coast, Gulf of Mexico and possibly other areas. The U.S. ECS Project is a collaborative effort among many agencies that are part of an Interagency Task Force, of which the USGS is a member.”

The most interesting striper I have caught. The thing fought like all hell. I couldn't stop thinking about how it happened. It looked to be about 28-30" long

If you haven't seen this, it's a flyover of sunning seals (Cape Cod area) that goes on for miles ... hundreds of thousands of seals. Imagine if a big red ball happens to wash ashore.

Below: A photo from my "jetty people" essay (http://jaymanntoday.ning.com/profiles/blogs/a-fun-look-at-south-jet...) has some folks asking me "WTF!?" A few folks instantly knew the answer. This is what needs to be done when a blueish flaps in-between the jetty rocks -- and gets wedged in. That's a long-handled gaff he's using. 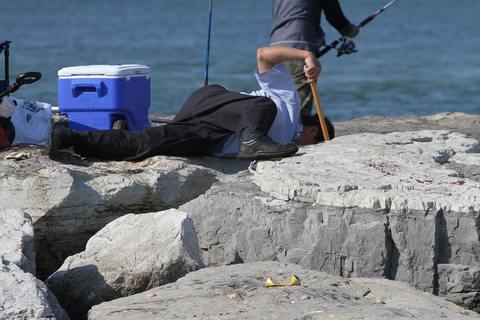 Below: The kids' catches at Surf City B&T:

The water was so cold today you couldn't even walk in it.