Wednesday, July 27, 2016: The ocean is making up for recent chilly and murky times.

Below: Research on the effects that smelling even small amounts of catnip can have on infants.

Kudos to this girl for being unashamed to be seen in public with such a deformed finger. Stay strong!

Below: The type I use. The world of paddleboard fishing is cranking it up. Chatted with a couple just coming off the water after angling about. One paddler I didn’t know showed me a real nice fluke. Another, LBI regular Mark T. decided to paddle out to the floating pipes off North Beach. His thinking: There might be some mahi below them. There wasn’t … but a thumb’s up for the creative thinking. Smaller mahi will absolutely come in that close, especially with onshore winds, like today. There has also been well-marked pods of smaller baitfish. They’ve been showing all along the LBI beachfront. Of course, that bait was highly viewable due to pretty much glassy conditions today.

Check out a video of one of the bait pods as it moved northward long the beach. Again, something was spooking them without committing to blasting them. Possibly sharks or rays.

Heard a slightly spooky tale of a Barnegat Inlet spearfishermen who got a couple fine fluke, tied them to himself and kept snorkeling. He soon had the company of a brown shark that came back once, twice then a third time. The charm-time, he had to fend it off with a spear … and then signaled his boat to come get him.

Despite decades of diving, I never spearfished much. However, I was once “poking” some fish for a barbecue in Bermuda, stringering some small catches on my waist. Out of the blue, literally, I had one of the biggest barracudas I have ever seen help himself. I ended up buying fish at the market that day. 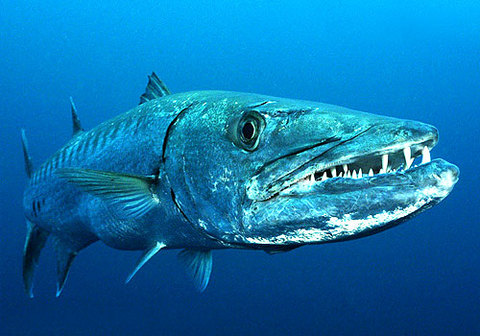 I later found out how close I came to something like this. 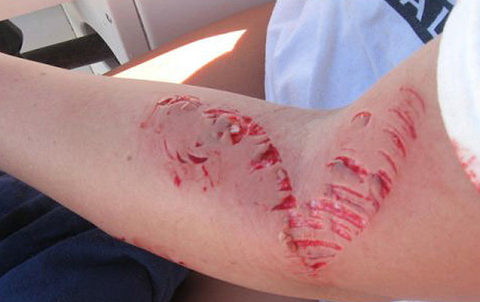 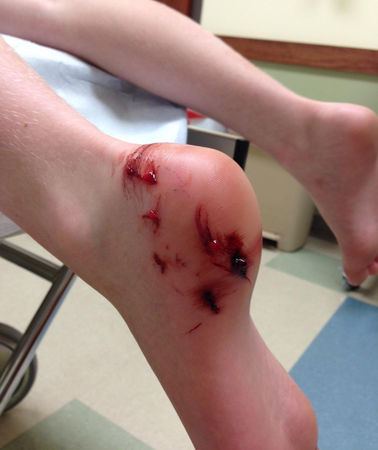 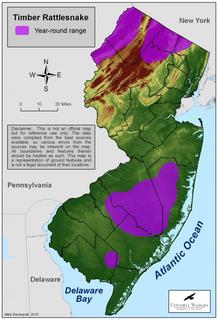 The New Jersey Department of Environmental Protection has just issued alerts for the public to be on the lookout for timber rattlesnakes. Such an alert is manna from media heaven for journalists. Publications around the state jumped on the timber rattlers, technically known as Crotalus horridus – though it absolutely doesn’t live up to the second part of that scientific name. More on that down below.

While the state’s current “Beware of Rattler” heads-up is aimed specifically at fairly nearby Manchester Township, I can confirm, beyond most, that our own Southern Ocean County outback tract entertains a rattler or two of its very own. Not to get site specific, but the more westerly that developers drive on Route 72, the closer to known rattler territory the realty ravenous public gets.

For decades, I’ve been following the news trail of local timber rattlesnakes. Closest to home was the C. horridus flattened on Long Beach Boulevard in Loveladies. That was many years back; I want to guess the Seventies. Maybe someone still has a newspaper with that front-page story.

At that Loveladies time, the area had begun what would be one of the last LBI buildouts. There was still a ton of open grassy ground lying around. That DOA snake might have been a longtime resident, having a real bad day. Of course, it’s more likely it had more recently swum over from the mainland. Such a distance dip would be a breeze for a timber rattler, which can swim like fish, albeit a surface fish. Their swimming talents are far above the serpent average. You won’t find a rattler worth its tail segments willing to take the long, dry route around, say, a Pinelands lake; it’s right in and straight across.

Which was the scenario not that many years back when a canoer was crossing a section of Lake Oswego, Bass River Township – as was a rattler, simultaneously. The two met, far more at the behest of the paddler who, per an apparent human tradition (as you’ll see), felt compelled to help the viper along, via a canoe ride. It ended toxically, though not fatally.

Timber rattlers, despite that horridus, are pacifists, damn near the laid-back hippies of the forest. They’re nothing like their hissy-fit relatives, most notably the decidedly deadly and oft ill-natured Eastern diamondback rattlers. Nonetheless, when push comes to paddle shoves, even a timber rattler will fang up for its rights. There was a fairly sophomoric lesson learned in the rattler/canoe confrontation: It might be best not to bring a protesting rattlesnake aboard a canoe. Just sayin’.

In the same vein, it’s been locally proven that it’s also not an overly great idea to help a rattlesnake cross the road.

I see many of you are nodding your heads while recalling the Tuckerton man bitten near Stage Road when he hopped out of his car to assist a day-warmed rattler get safely to the other side. The 24-year-old man’s heart was in the right place; his hand, not so much so. As we like to say in these-here parts, he got bit. I bring up that “day-warm” angle because the warmer a snake is the faster it can strike. Enough said. Interestingly, the motorist bite was only a few miles, as the snake crawls, from the Oswego canoe v. rattler event. It shows there are a goodly number of these highly endangered snakes still out there, albeit in so-called colonies.

Over the years, I’ve counted over two-dozen different rattlers, mainly in the Bamber Lakes, New Gretna and Chatsworth areas. Chatsworth is where I was once dry-bitten by a rattler I didn’t see while trying to capture another one for measuring. I still proudly bear – and freely point out – the fang scar.

As to you seeing a rattler during this current alert period, don’t count on it. They’re so well camouflaged even they can’t see their own bodies. Also, they’re hardly ever out and about. Being such proficient hunters, they come out, quickly chow down and go to some highly secretive spot, roost and digest for days on end.

Most of all, you shouldn’t fear their presence. As noted, they’re not one of your bad-ass pit vipers. In fact, I’ve known a pet timber rattler that was absolutely docile, a lap rattler of sorts. He took a liking to me. And it was a wee bit unnerving when I visited and he bee-lined straight for me when let out of his plastic-bin home.

Below: This is the color we see in NJ. They can get almost black in melanistic phase. I've seen them that dark in PA. 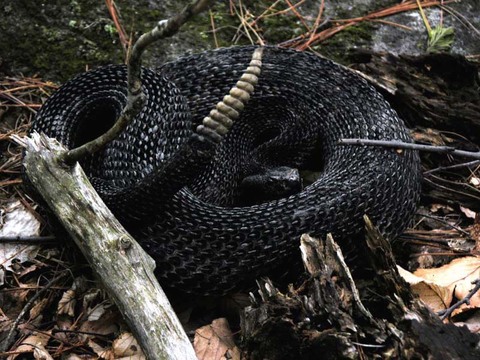 If you do happen to spot a timber rattlesnake, be assured it needs no help crossing the road, or even your yard. Call the state Division of Fish and Wildlife at (609) 628-2103. On nights and weekends, call 1-877-WARN DEP.

When all your countless hours rambling to people about tuna fishing and the pile of money spent doing it, all comes to the last and final stage. I always enjoy this part. It's when I sit and think about all the laughs along the way that comes with all the hard work we've all put in to enjoy this. Thank you fishy God! 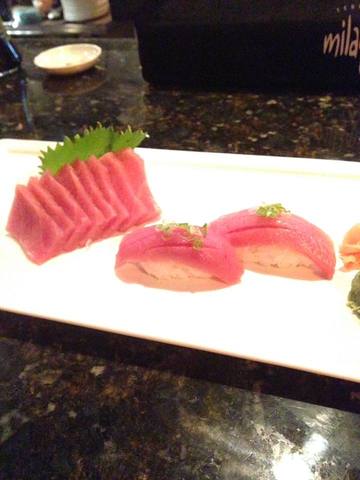 Below: On a popper?! 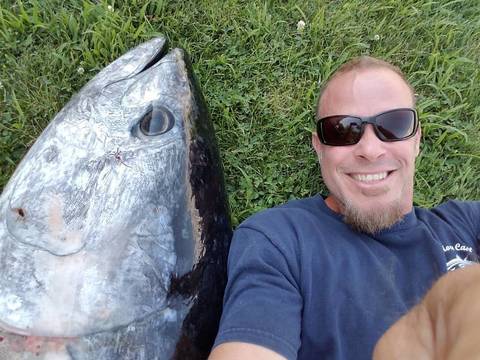 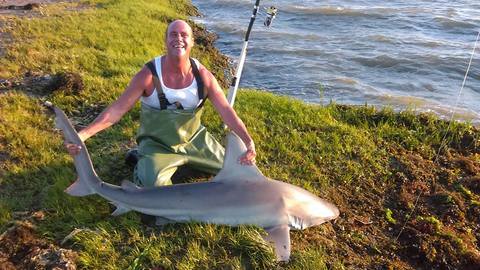 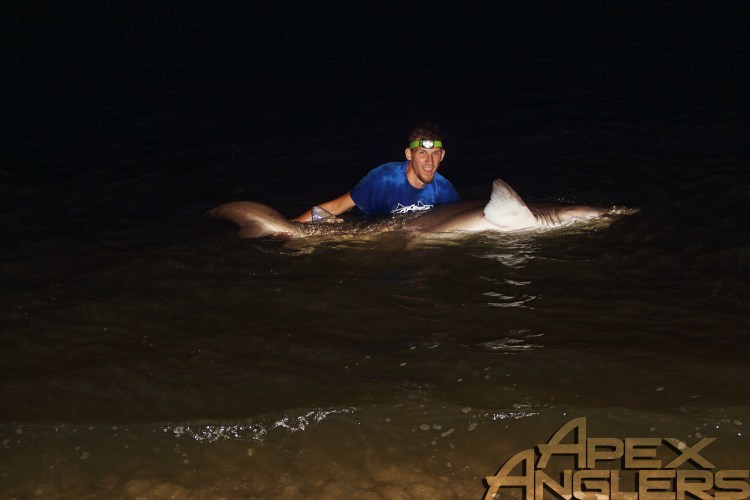 All I can say is that if you want to catch a shark, NOW is the time! In the past two nights alone we’ve landed 29 sharks. The baits are lucky to soak for 10 minutes. If we fish more than one rod, we are doubled up at least a few times per night. Fish are generally ranging from 4 to 5 feet in length, but fish up to 8′ were caught this week! One shark in particular was tagged with a NMSF cooperative shark tag. The tag looked quite old and originated all the way down in Panama City, FL. My hopes are high that it was tagged in southern waters, but time will tell. Be sure to check back often or follow us on Facebook to stay updated on the details of the tag and all other Apex Anglers related news.

Absolutely insane fishing right now, so be sure and check out the schedule and come on down to the Jersey shore after hours where all the gear is provided and all you have to do is show up and catch some sharks!

Remember, this is a CATCH AND RELEASE fishery. All sharks are handled with extreme care, we have time to either photograph them or tag them, but not both. Our number one goal is the safety of the sharks. We are very experienced, have the appropriate gear, and are extremely comfortable swimming with these fish, when necessary, to ensure their safe return to the ocean.

In other news, among the chaos this week, we had a broken rod, a broken reel, a foul hooked shark and a shark bite! See photos below (click to enlarge). A big thanks to Jack Skinner & family, Colin and Kyle Scott for jumping in to help, Dan D’Alessio for making the drive for our fun trip, and to everyone who came out to fish with us this week!

See you on the sand,

Damn nice fish! Took the all three of these dudes in rotating shifts a good hour to bring this bad boy in, and a good harpoon shot by Cory to seal the deal. 74”. Freak’n awesome. On a RonZ, and spin gear! Stoked!.
— with Tom Doall and Joey Smiles-Bass. 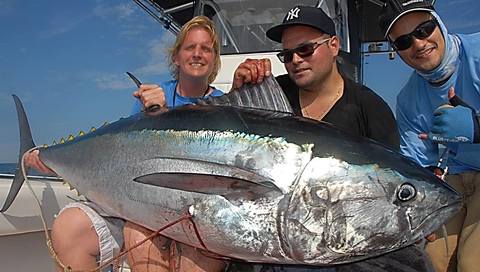 Forgot and per request
:) hook set is from front and middle. Retrieve from! Butt end 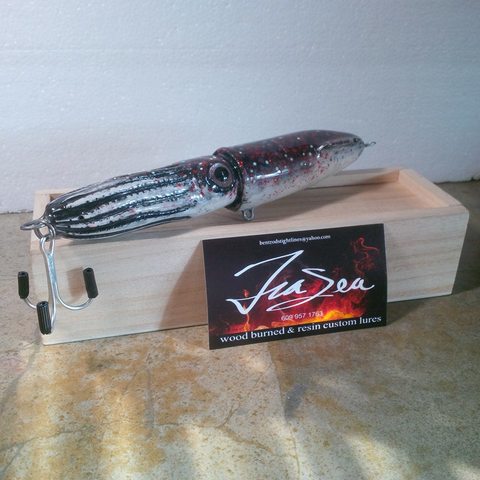 
Busted off two monster sand tiger sharks and landed this behemoth rough tail stingray last night. Mickey had a hell of a time wiring this one in the crashing surf!
— with James Amore, Mickey Melchiondo,Chris Lido and Sean Reilly. I was lucky enough to be invited along to see the banding of the IBSP chicks this past Monday morning 7/25/2016 with those from NJ Fish and Wildlife and SUNY-ESF. It was amazing to see all of the hard work and science behind the banding project and im hopeful to see where these lil guys end up when bands are sighted in the future. 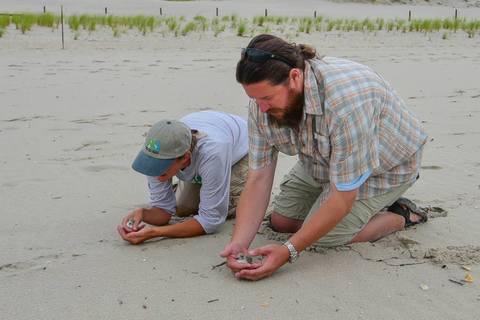 Gianni Mandile, 13, was surfcasting with his dad, Joe, when the boy felt a tug on his line and reeled in what Joe first thought was a stingray, WABC 7 reported. Instead, Gianni, who's been fishing since he was three, had landed a 200-lb., seven-foot shark.

"He saw it first," the older Mandile told WABC. "As the wave curled, he saw the silhouette of the shark in the wave and he said, 'Dad it's big, it's a big shark!'"

After taking some pictures and video, the pair, in keeping with the family's custom of catch-and-release, let the shark go.

RE: The second GIF. What finger?

Razoo: You guessed it ... I have to be careful when I flip it up in public.

My wife and I took a ride to Manasquan Inlet around high tide yesterday afternoon on the Pt. Pleasant side and saw several schools of small flashing bait on the surface being fed upon by some gulls which looked to be either rainfish or small spearing as you say.