Below: The relationship between childhood violence and aggressive behavior later in life:

A: Simba being mistreated at nine months:

DRIVER'S ETIQUETTE: It's important to always calmly and courteously use your turn signal when changing lanes to avoid a falling utility pole ...

Below: At first glance this looks like some sort of yard ornament. Nope. It's an all-too-real fish; an armored catfish. You guessed it: another invasive from Asia. And they look so cute when sold at pet stores -- at half-and-inch in length. 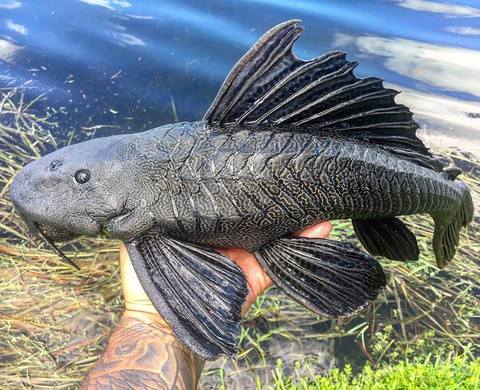 Wednesday, July 20, 2016: Not bad out there. Light onshores and real clean water has moved in.

The sun has played hide-and-seek a bit, toying with some midday clouds emanating from the moisture within arriving onshore winds.

As expected, the  water temps have taken off with that wind change away from the south. Today you can take your pick of wind directions, as it goes NW, N, NE, E, and finally ESE by day's in. One down side to the tilt to the north is the arrival of  eel grass, though cleaner water now being seen (see photo) will push all that grass ashore -- to eventually meet the rakes of public works folks and their daily beach grooms.

Below: Look closely and you can see the color-change "break" between icy/dirty upwelled water and crystal clear warmer water as it muscles its way back in. By the time you read this, surf temps will likely have gone from 59 degrees, taken at a couple beaches yesterday, up to between 72 to 75 degrees. Below: I dub this "Playing nicely together ... very closely together." This is on day you don't want to drift outside the flags to the north. 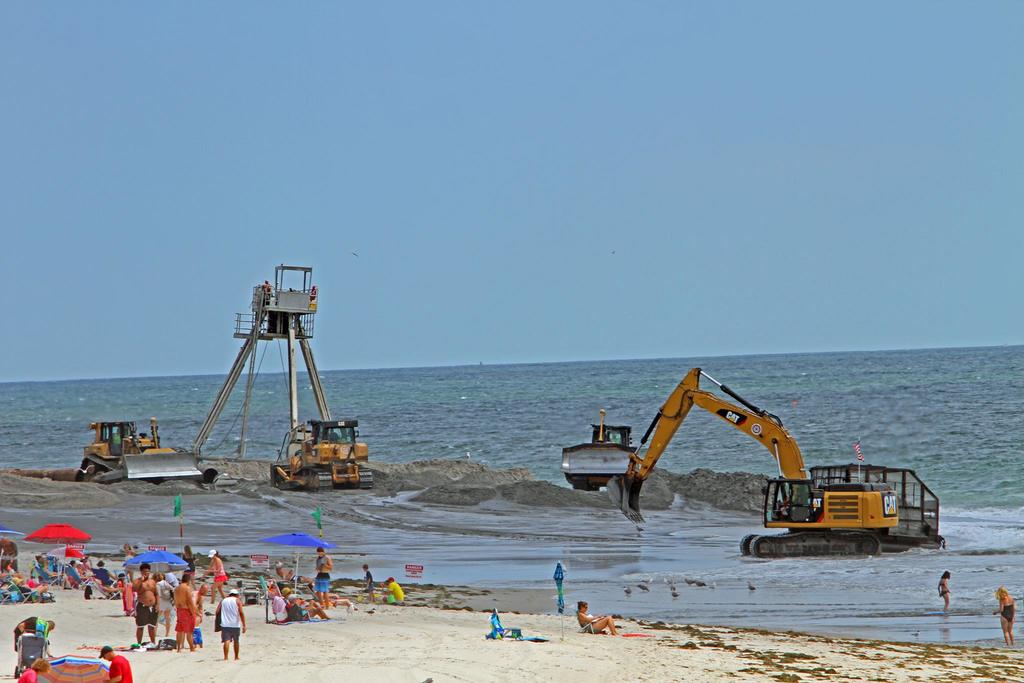 This scene is a long way from the first beach replenishment in Surf City, when the Corps and Great Lakes pretty much shut down all public access to huge stretches of beach. I have to think that Great Lakes is also learning how to integrate replenishment with the public's need for beach time, after all, work like this will be the norm for many years/decades to come.

I know that long-range repeatable replen concept rubs a few people the wrong way, mainly those folks convinced the work is a waste of money. Well, this is not a good year to run with that waste of money concept.

I'm seeing and reading that this summer is absolutely killing it on the commerce front, even with beach badges sales. Get this: Just the profit from beach badges along the NJ coast covers the average annual cost of replenishment. That's mind boggling when you then start to factor in the big numbers, like billions (in profit ... taxable profit) that is coming via coastal commerce.  How can even the most cynical anti-replen soul not see both the profit margin and the incredible fun time being had by beachgoers -- as if you can even put a price tag on the fun factor. Then, to have the gall to suggest that millions of beach lovers should be deprived of summer fun because said soul failed math.

But there I go getting all riled up on an otherwise quite-nice day.

Below: Prior nice day. 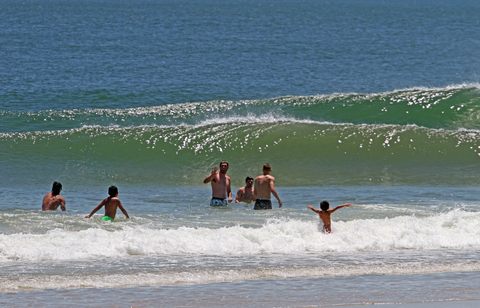 BIG-TIME TIGER: The arriving warm water is most likely behind the amazing sand tiger shark taken off Beach Haven Crest at around 8 p.m. last evening by surfcaster Cody W.

Chatting with the young man on the phone, he told of losing a huge fish a couple nights earlier. Last night, he was out for revenge, bringing a along a larger set-up than previous nights.

To tempt his target -- which he hoped would be the same fish he had lost -- he put a large bunker chunk on a circle hook, fished off an eight-foot rod and a medium-weight spinning reel, hosting 30-pound test mono. The business end of the line was a 20-inch steel leader with the sinker up near the tag end of the line. I'm picturing maybe a three-way swivel set-up.

"I waded out into the water until I was waist deep and cast it out as far as I could," recalled Cody.

It was Cody's brother who first noticed the spiked rod/reel bent over to the max. I'm not sure what degree of drag was in play.

And the fight was on. The hookup took up the next 45 minutes, as the fish assumed one of those typical back-and-forth, war-of-wills strategies common to sharks. It was sunset and late-day beachgoers began looking on with due interest.

When the shark was into the shallows, Cody saw just how big his hookup was. Needing help with the landing, Cody's dad jumped in to help with the haul-in process.

It was during the haul-in that Cody and kin realized the shark was an easy eight feet long and easily over 300 pounds. The multi-rows of teeth confirmed it was a looker of a sand tiger.

Once in the shallows, a moment was taken for a photo the massive shark before the quick-release procedure got underway, the tiger being pointed back out to sea. "It swam off just fine," said Cody.

With the warmer and cleaner surfside water now in place, I think I might now be going toward the Crest for a late-day lookdown swim ... with my new full-face mask/snorkel.

While Cody thinks his over-sized catch might be the same fish he lost earlier in the week, he didn't see any signs of a lingering hook or line from an former escape.  Since Cody uses circle hooks, I'm pretty sure a lost hook would still be right there in the corner of the landed fish's mouth. Still, one never knows. 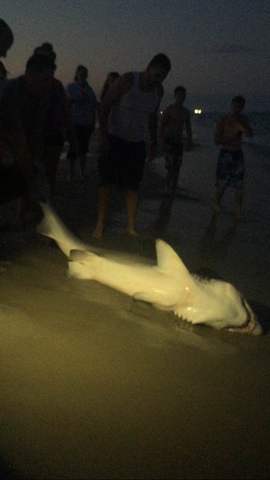 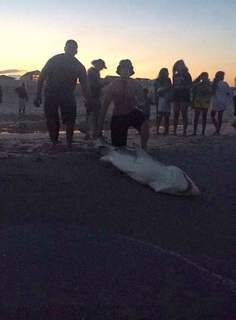 What a set of jaws a tiger like Cody's must have had. Real wall mounts back in the day of wantonly wasting sharks, sometimes just for their chopper. 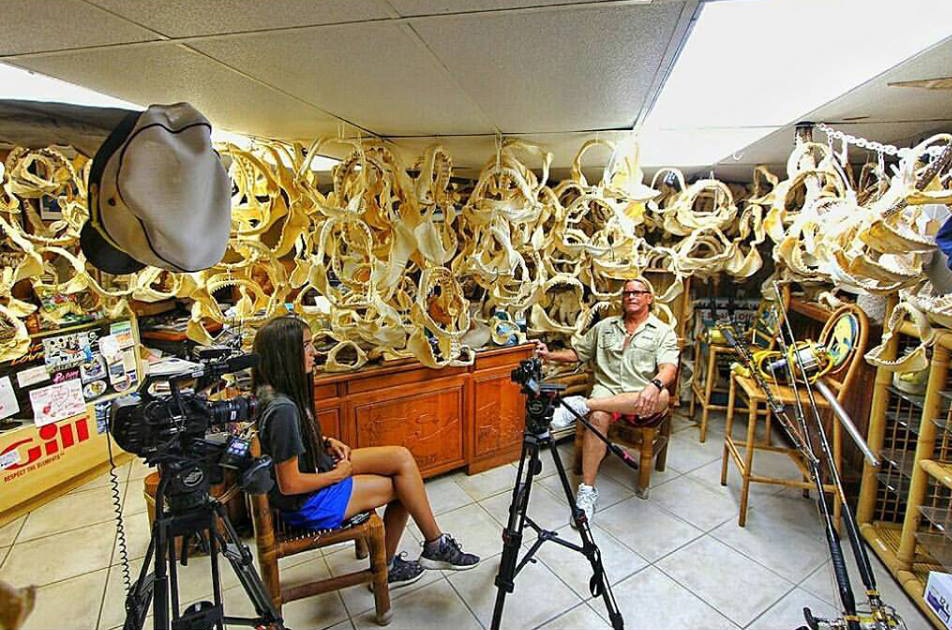 But even if I found a DOA, washed up "protected" shark, I wouldn't be allowed to mess with even its deceased parts. NJ is strict about that animal body parts stuff.

Don't get me going on the fact you can't sell white-tail deer parts, even their comely racks. The dang things are so overpopulated that they're screwing up the delicate Pinelands ecosystems but heaven forbid if you're caught with the antlers from a rotting roadkill buck.

Below" Technically, it's illegal to take these -- or even have them in your possession in some cases. 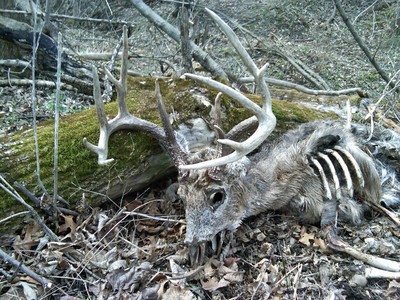 Wow, how the hell did I get from a monster shark caught on an LBI beach to $5,000 in front-end damage done by a white tail deer? Because that was just-estimated damage to a buddy truck -- "$2,500 out of pocket. 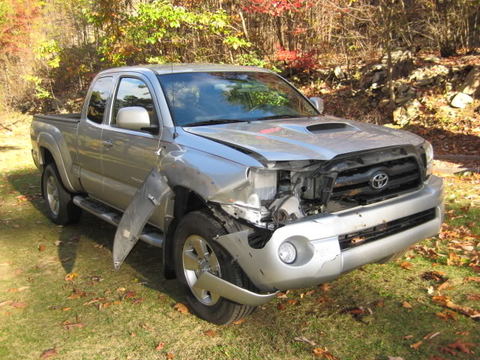 Waretown, NJ · Our catch of the day! My first mate was very helpful this morning! Below: I'm trying to figure out why this kinda spooks me. 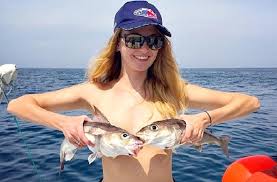