Wednesday, July 06, 2016: Sweet as summer pie out there, though that pie will start bubbling if

Below: Further proof of what we've long suspected about the lives of people in lab coats ...

Below: Yet another ... "He seemed so much brighter at the shelter."

Wednesday, July 06, 2016: Sweet as summer pie out there, though that pie will start bubbling if the temps I see coming beat down hard enough. The mainland is especially in for its first fry of the year. While temps in the 90s are something we see every summer, we’ve actually been kinda cool to this point so we haven’t quite acclimated to jungle conditions. I know I haven’t.

I went to the beach to do the Weather Service video (http://www.youtube.com/watch?v=Rb46ZL1Rzpg&feature=youtu.be) and I was hot-footing it back to my office. Bring on the ide-ass southerlies, though they won’t do squat for folks over the Big Bridge.

As of this a.m., the warm ocean waters had moved back in. Yesterday, a lens of really chilly water moved up the entire coastline, based on today’s (daily) beach patrol conference call with the Weather Service. One beach had a 62-degree water reading. Again, today we’re back into the low 70s. However, it doesn’t take much of a south wind flow to upwell that cooler deeper-down water. Cold-water eddies in the surlfine can be dangerous. You swim out a ways in a 70-degree ocean and suddenly pick up a little rip current carrying 62-degree water. That can knock the mick out of your swimming stroke. Never a good thing.

Chatted with a couple early a.m. surfcasters. Both skunked … but quickly mentioned what a fine morning it was. If only you could fillet and cook-up aesthetics.

For flukers, the stalled air this a.m. killed any natural drift, short of inlet tidal flow. I hate bumping around to create a drift; the smell and noise just isn’t the stuff on laid-back summer fluking.

I see where a flotilla of offshore boats headed out. It has to be like lake out there, wind-wise. Not that I’m an old-hand at big game fishing but dead calm is simply not the condition for trolling, though I do enjoy it for doing flying bridge time since that glassiness allows for great wildlife watching. It also makes it easy to read temperature breaks. Just no fishies. 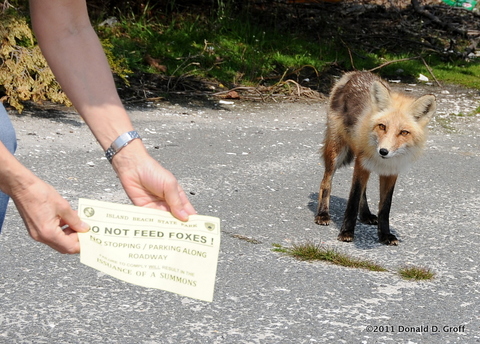 After remarking about the low presence of town foxes on the North End, I got an email stating there are some fox tracks along the BL dunes. I hope to give that a look-see.

When reading tracks – and anyone can do this – I look for signatures. No, a fox doesn’t write out “Kristofferson Silverfox” in the sand. Very often, a paw print has a telling mark, sometimes a scar from a previous injury. Often, a telltale identifier is simply the overall look of the paw print. For those really good at tracking, a certain animal’s track might indicate a signature gait.

Why even individualize a paw print? Not long ago a fellow I know said there was an entire family of skunks near his house. “There are tracks all over the place,” he said, going as far as surmising “I’ll bet there’s half a dozen of ‘em.” Oh, there were tracks all over the place … all the exact same animal … coming and going and coming and going. One of its toes was quite scared, almost mangled. It’s signature. News of a lone skunk made the man’s day. He was fine with a single skunk near his home. Of course, I forewent telling him that the likely reason the skunk was coming and going so crazily was the likelihood it had a brood it was keeping fed … from the man’s outside cat-food bowls. 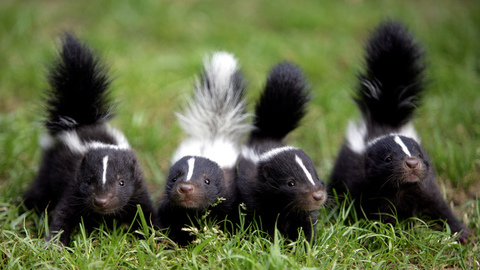 Speaking of skunks, it is fully false that the walk around stinking to high heaven. Any odor comes from a fairly recent confrontation or misadventure. Check out this looker of a skunk (Stafford): http://www.youtube.com/watch?v=kLzL3ayF-d8

As much as a skunk’s smell is symptomatic of a protection mechanism second to none, it can also give away its location. Despite it’s stench-making ability, skunks are preyed upon by red foxes, cougars, coyotes, wolves and domestic dogs. But possibly the main taker-down of skunks are large owl. I kid you not. Pet skunk owners know this all too well. 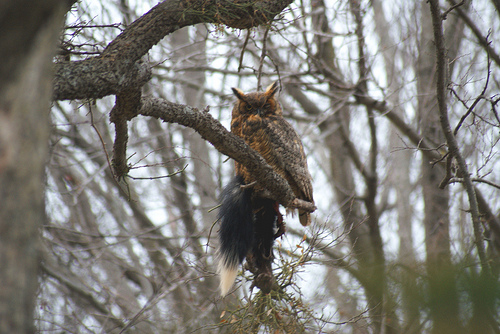 By the by, predators that freely feed on skunks are not overly bothered by the stink. In fact, a domestic dog will joyfully come bouncing back home after taking a double dose of mercaptan. It’s actually oblivious, closer to indifferent, to the stench. But what about a dog that comes back all sheepish after taking on a skunk stink? Most often, previous experience. It recalls the insufferable bathing it got last time it stunk up the place. 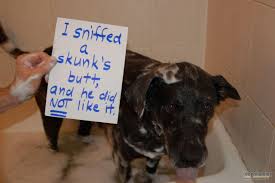 In my near nonstop hiking of the outback, I would often come across the torn-apart remains of hapless skunks. I’m betting its coyotes taking them down. That said, you can’t tell me you haven’t noticed a marked decline in the number of roadkill skunks … and the famous lingering testimony to their demise. Don’t think that coyotes are doing us a favor by deskunking the neighborhood. Skunks are an essential part of the ecosystem, ridding them creates an imbalance. Imbalances never sit well in nature. 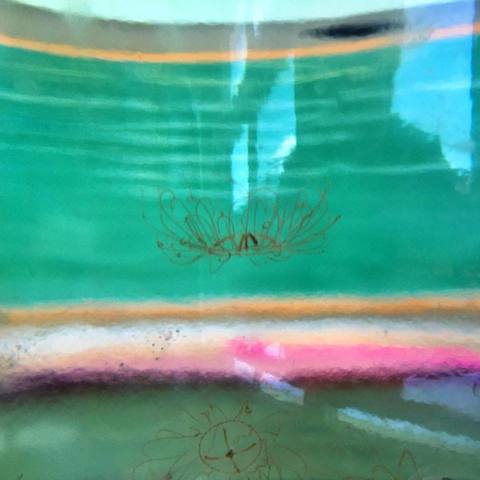 The clinging jellyfish have arrived. Not in our waters but in a jar thanks to @montclairstateu who is here at #barnegatbayday2016 in the Marine Sciences Building @lbif . Come see what the buzz is about these tiny creatures that have been all over the news.

I want to put this part of my weekly SandPaper blog in here since I know how many folks enjoy PETA as much as I do. Full column is at: 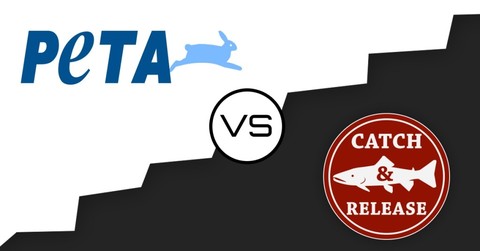 PETA PUTZES: As much as I align with groups fighting to keep our seas healthy and fish-filled, I mockingly rail against any sickly-green groups stumping to end all fishing. Hell, it’s all but unchristian to rail against fishing.

This week, I’m compelled to insult my own intelligence by venturing into the delusional land of People for the Ethical Treatment of Animals (PETA). They recently re-ignited an anti-angling cause that has me rolling around in my laughing shorts. What, you don’t own a pair? PETA titles the cause, “The Cruelty of Catch-and-Release Fishing.”

Hold onto your heartstrings as I objectively offer their lead-in to fighting catch-and-release.

“Imagine that you’re a fish, darting around your watery home and finding tasty snacks to enjoy. Now, imagine that you bite into one of those snacks and suddenly feel searing pain as a sharp hook rips through your mouth. You fight against it, but the painful hook is pulling you up toward the surface of the water. You struggle until every last ounce of your strength is gone. You’re then hoisted into the air, away from the safety of the deep water, and that’s when you begin to suffocate….”

Now, if your tear-jerked eyes will clear for a moment, let me focus your attention on what we’ll call … reality!

Trying reality on for size, imagine that you are, in fact, that self-same PETA fish, “darting around your watery home and finding tasty snacks to enjoy.” In fact, further imagine that you follow PETA protocol and “bite into one of those snacks and suddenly feel a searing pain …”

But the pain isn’t an angler’s hook! … It’s a savage bite from a merciless bluefish, driving fang-like teeth into the most delicate part of your bitty body, gashing open a wound so diabolical your little bunkie body literally vibrates in excruciating pain – only to have a second bluefish swoop in and bite off yet another chunk of your body. The entire time you remain agonizingly aware … while being eaten alive. Your last corporeal thought focuses on the atrocious feel of your killer’s stomach acids, dissolving away the final threads of life. 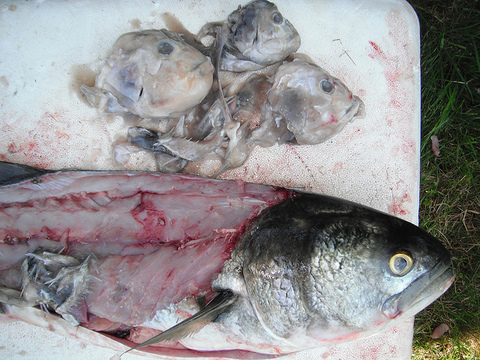 Come on, you PETA numbnuts! Here you’re crying crocodile tears over some minor pain inflicted on the predatory-thick mouths of utterly savage gamefish, absolute rampage killers. Where’s the sound of your delicate heart strings during the screaming crescendo of countless small fish being torn to suffering bits by those same mouths you’re so preciously protecting?

I’ve asked them that. Their rote response: “Oh, that’s out of our control.” So, apparently, is your ability to assess reality.

If PETA wasn’t so mucous-brained, they could keep rallying against catch-and-release fishermen – for the way we maliciously release known killers and pain-givers back into the water.

“We’re keeping these fish for your sake, PETA”

I hope PETA people all come back some day as bunker. 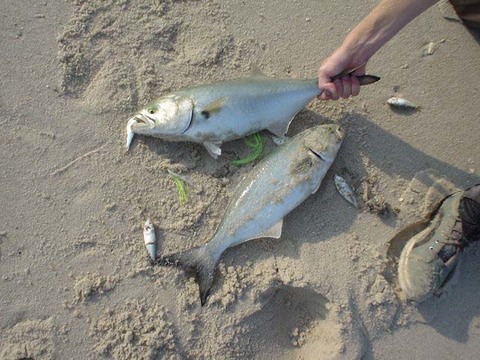 It's the time of year that a bunch bull is a great thing. 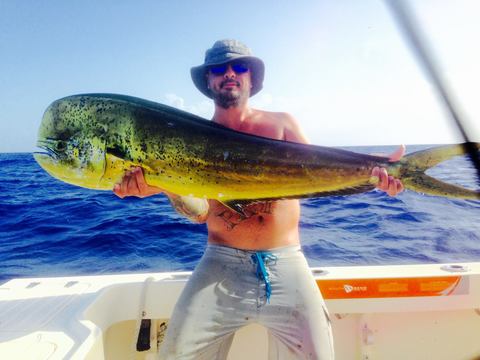 The New Jersey Department of Environmental Protection (DEP) has issued a final New Jersey Pollutant Discharge Elimination System (NJPDES) permit for PSEG’s Salem 1 and 2 plants. The permit allows them to keep the plant running the same way it has been, without cooling towers, for another five years. The present cooling system is responsible for killing 3 billion fish a year, including endangered Atlantic and Bottlenose Sturgeon, a number which would be drastically lower if the plant had the necessary cooling towers. We believe that without a system to reduce fish kills, these permits are insufficient. We feel that they are inadequate and that these permits will only allow the fish kills to continue.

“It is outrageous that the DEP reissued Salem’s 1 and 2 plants a NJPDES permit for another five years. They care more about PSEG than they do about protecting the environment. The plant will continue to operate for five more years, killing 3 billion fish a year and dumping super-heated water into our waterways. Allowing the plants to run for another half a decade without cooling towers to address these kills is unconscionable, especially in light of the recent federal proposed critical habitat designation for the Atlantic Sturgeon,” said Jeff Tittel. “The DEP should be called the ‘Department of Excessive Pollution’; these plants will continue to rob the rivers and kill our wildlife. We had to challenge the DEP to do their job and issue the permit in the first place. Now we will challenge this permit in court since they’re more concerned with the polluters than the environment or the billions of fish killed.”

Blood Spills on to the Shores of the Danish Faroe Islands in the First Pilot Whale Slaughter of the Year.

Today, at approximately 1200 local time, a pod of 30-50 pilot whales was slaughtered in the first grindadráp (grind) of the year, on the island of Viðoy in the Danish Faroe Islands archipelago.

The ordeal began this morning when locals spotted a pod of between 100-150 pilot whales passing by Svínoy. Several boats then drove the pod of whales approximately 11 kilometres to Hvannasund, where the whales were forced to beach, and slaughtered by locals. Faroese media outlets have confirmed between 30-50 pilot whales have been killed.

“Is it exactly these kinds of atrocities that authorities in Denmark and the Faroe Islands are attempting to cover-up, by refusing Sea Shepherd crews entry to the archipelago,” said Sea Shepherd Operation Bloody Fjords Campaign Leader, Geert Vons. “And this is exactly the reason why we continue to push the increasing global momentum to end this bloody and brutal practice.”

In 2015, the international crew of the Sea Shepherd ship, Bob Barker, was unlawfully denied entry to the Faroe Islands by Denmark. In 2016, a new law was passed in the Faroe Islands, which requires all Sea Shepherd volunteers must have a visa to the archipelago. As a result, Sea Shepherd has modified its tactics in the battle against the grindadráp. The organisation’s 2016 Pilot Whale Defense Campaign, Operation Bloody Fjords, sees Sea Shepherd take its battle against the grindadráp to the heart of the Faroese and Danish institutions that continue to promote this outdated practice.