Wednesday, January 25, 2017: While the sea and bay have returned to normal in a mere matter of hours, the beaches will be gouged for a long time

Below: Today's "He seemed so much smarter at the pet store" moment ...

Wednesday, January 25, 2017: While the sea and bay have returned to normal in a mere matter of hours, the beaches will be gouged for a long time to come, likely even into summer.

Yes, the look of utter erosion is deceptively dramatic since the ocean ate away at a replenished beachline. Nonetheless, the beach took quite a whacking. Had the replen not been there?

As I had previously noted, this blow was also the worst hit since many of the Island’s beaches were renourished. A hit had to come sooner or later.

It’ll now be a fascinating watch to see how quickly the sand returns to overwashed beaches … and how much ends up on Holgate’s more southerly beachline. Per the science behind replenishment, the sand moves into the ocean during storms, then migrates back in. Let the migrating begin.

I’m certain  there will be a lot of mechanical sand moving going on – some has already started in Holgate -- since that’s the only quick-fix option. Any trucked in fill has to undergo certain municipal, county, state, fed oversight.

I’m not big on trucked in material. Not only is it expensive but seems so insignificant in the face of how much sand is still in the near-beach system, coming back in the form of berms. Off-color mainland sand is not needed, though the nearby sand and gravel quarries/companies would like to strangle me for saying that.

I’ll also admit that the notion of caravans of dump trucks rumbling crazily over the narrow lanes of the new Causeway bridge is not overly appealing. And don’t tell me those dump truck guys can’t get a little antsy when being paid by the load.  Not of all of them, mind you. Just the ones driving behind me.

Speaking of the feds, mentioned above, they are surely doing flyovers -- or drive-downs to the Shore to see the damage. I won’t even try to sort out what might require a replen based on the Sandy Act and which might fall under the long-term replen project. All I know is this storm is well-suited to add emphasis to – and possibly expand upon -- the repaired scheduled for this fall. Hell, face it, a floating port should be built off the Jersey coast to keep dredges at the ready.

Sad photo Tweeted out by
Nora Muchanic: the Nor'easter carved out a 15 foot cliff in Holgate.. They lost about 75,000 cubic yards of sand and more than a hundred feet of beach. So much of the beach replenishment effort is just washed away with one storm. No easy answer on how to fight Mother Nature! THANK-YOU, MARGARET: A sincere thanks to Margaret O’Brien (Jingles Bait and Tackle) for her tireless service to angling on LBI -- along with her invaluable leadership in the LBI Surf Fishing Classic and Simply Bassin’ tournament. She helped float the Classic during its precarious move from the Chamber to the shops.

As you might know, Margaret recently had a heart scare – shortly after retiring, no less. After a stint placement, she’s recovering nicely. Knowing her toughness, she’ll turn her retirement into something special.

Here’s hoping her shop is purchased and kept as a tackle shop. She won’t be returning in the spring even if a buyer is not found. It’s going to be so odd without her in the fishing realm. 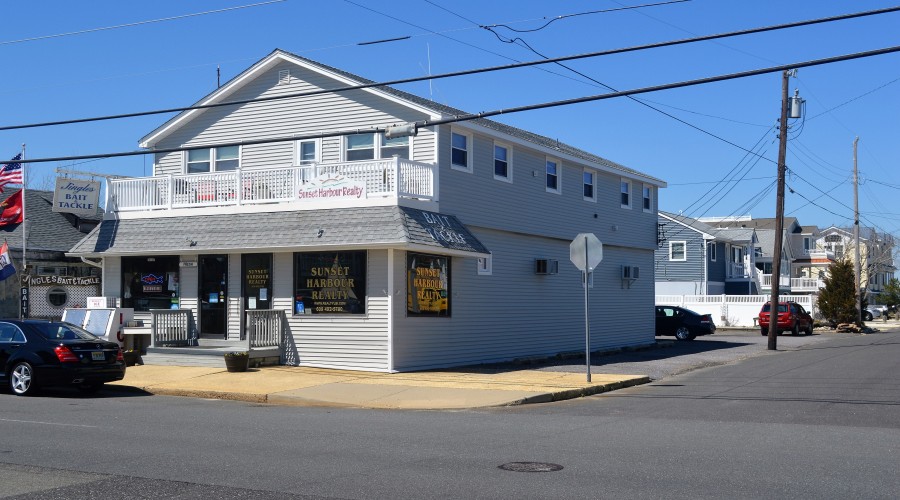 NOAA is dedicated to investing in the tools and resources communities and businesses need to address the impacts of extreme weather and climate-related hazards, as well as to restore coastal habitat to enhance the resilience of coastal ecosystems and the communities that rely on them. NOAA has developed the Coastal Resilience Grants Program to strengthen our economy and provide sustainable and lasting benefits.

This competition represents the integration of two existing grant programs: the Coastal Ecosystem Resiliency Grants Program administered by NOAA Fisheries, and the Regional Coastal Resilience Grants Program administered by NOAA’s National Ocean Service. The competition will fund projects that build resilience, including activities that protect life and property, safeguard people and infrastructure, strengthen the economy, or conserve and restore coastal and marine resources.

Eligible applicants include nonprofit organizations, institutions of higher education, regional organizations, private entities, and local, state, and tribal governments. Typical award amounts will range from $250,000 to $1 million for projects lasting up to three years. Cost-sharing through cash or in-kind contributions is expected. Projects must be located in one or more of the 35 U.S. coastal states or territories.

NOAA 2017 Coastal Resilience Grant Information Session
Join representatives from the National Ocean Service and National Marine Fisheries Service for a short presentation, followed by a question and answer period. No preregistration is required.


Hopkins also pleaded guilty to obstructing a boarding by the U.S. Coast Guard.


According to a Justice Department statement, an investigation began in Feburary 2010 after a special agent with the National Oceanic and Atmospheric Administration received information that commercial trawlers were illegally fishing for rockfish in federal waters off the coast of North Carolina.


Since 1990, harvesting Atlantic striped bass has been banned in the United States’ Exclusive Economic Zone, which includes waters 3 to 200 miles seaward of the coastline. The ban has been in place due to drastic declines of the stock in the 1970s.


North Carolina allows harvesting the fish from state waters inside 3 miles but often limits fishermen to no more than 100 per trip. Commercial fishermen are required to report fish caught in state waters. That report is then submitted to NOAA’s National Marine Fisheries Service, which assesses the fishery and its sustainability throughout the Eastern Seaboard.


NOAA was helped by the U.S. Coast Guard, which stopped the Lady Samaira, captained by Gibbs, one of 17 commercial trawlers in the EEZ, and found 173 Atlantic striped bass on board ranging in size from 36 to 41.5 inches long.


According to prosecutors, Gibbs admitted to the boarding team that he was targeting rock fish. When asked where he caught the fish, Gibbs showed the boarding team electronically-saved track lines from the vessel’s navigation computer.


The government said that the track lines shown by Gibbs were fishing tows he made in state waters, where the harvest of striped bass would have been lawful at the time, almost a year prior to the February 2010 boarding.


After completing its inspection, the Coast Guard allowed the Lady Samaira to proceed to port in Engelhard, where NOAA agents awaited to conduct a dockside investigation. Agents found only 99 striped bass on board, and that the rest of the fish were dumped overboard by the crew on their way to port.


The conservative retail value of the missing fish, based on fillet weight, was over $12,000.


Prosecutors said Gibbs initially told agents he caught the fish in state waters. After data was presented from NOAA’s vessel monitoring system, he signed a written confession that he had fished in the EEZ.


Investigators said they were able to recover data that Gibbs had deleted from his computer that showed track lines of the Lady Samaira from trips between January 2009 and February 2010 that were inside the EEZ.


Based on its investigation, NOAA determined that during the same time period, the Lady Samaira, with Gibbs as captain, harvested more than 9,000 pounds of Atlantic striped bass from the EEZ, which he sold to a fish dealer in Engelhard, valued at more than $72,000.


Given the other commercial trawlers in the same area, NOAA conducted an analysis of electronic data and written reports from those vessels.


NOAA determined that in the same period, Hopkins, then Captain of the Lady Carolyn, harvested more than 7,000 pounds of Atlantic striped bass from the EEZ, which he sold to fish dealers in Wanchese.


The retail market value of the fish illegally harvested and sold by Hopkins exceeded $55,000.


Nine local commercial fisherman, including Gibbs and Hopkins, were among a group of 13 from North Carolina and Georgia indicted in March 2015 in a federal investigation into the illegal catch and sale of striped bass in 2009 and 2010.


The overall investigation was conducted by the Law Enforcement Offices of NOAA, with the Investigative Service from the U.S. Coast Guard, the North Carolina Marine Patrol and the Virginia Marine Police.