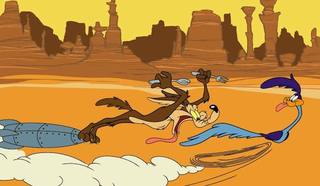 Wednesday, January 13, 2016: Nasty cold … but who’s counting? We have to recall the early winter reprieve we got and be warmed by how much of winter has already been eaten away without the need to eat frozen food, so to speak.

By the by, the Weather Service – and an increasing number of meteorological agencies – gauge winter from Dec. 1 to March 1. It actually makes sense, sky-wise. Solstices and equinoxes are calendric not meteorological.

I do not know (yet) what that new, very well-made, bridge railing is in the Causeway build zone. It's within the Bonnet Island stretch. I'll get a writer to check. To me, it seems a bit out of place. DOG TO-DO: For dog owners, I want to pass on the wording of Long Beach Township ordinance regarding dogs on the beach.

I had recently been ranted upon by a female caller harboring an obvious dislike of dogs on the beach -- and, seemingly, all lifeforms in general. She hissed that I had wrongly written that dogs did NOT have to be on-leash in LBT. I held my ground, but also recalled that I had gotten a very uncertain answer from some township folks I asked, as in, "I'm pretty sure they can run free."

Though I doubt this gal reads anything beyond "Bitching Monthly," I’m herein highlighting prime parts of the township’s “Running at large” ordinance (§ 47-4. Running at large.) It seemingly refutes her claim that dogs on the beach must be leashed, as seen in, “ …animals may be permitted to run on the beachfront within 100 feet of the mean high-water line of the Atlantic Ocean, when accompanied by their owners and under the control of their owners, responsive to command.” 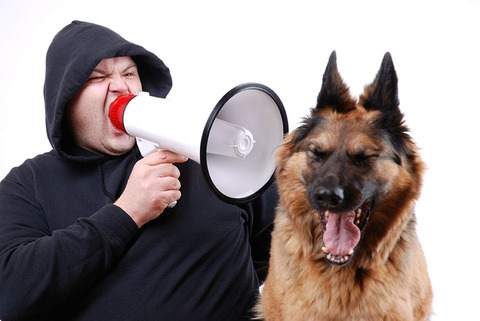 That sure seems to indicate a dog does not have to be on a leash, since the “under control” is clearly associated with “responsive to command.” 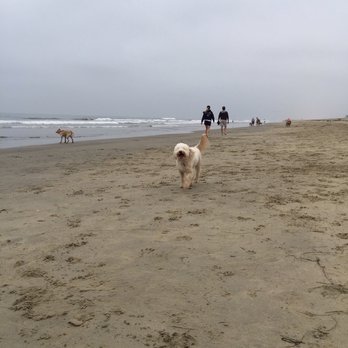 At the same time, it seems to say dogs cannot be up near the dune-line on larger, replenished beaches, since that would likely exceed the allowable “100 feet of the mean high-water line …” You might have guessed, my conversation with this dog-disliker did not end amicably. I won’t get into details. 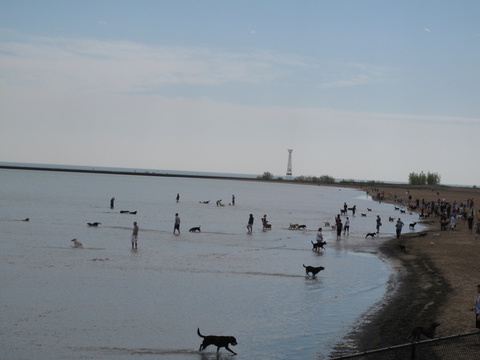 As a bit of a chuckler, I have to alert dog owners to LBT's four-inch rule.

Dog owners already know the necessarily strict laws regarding picking up after your pet. In ordinance-ese it reads (condensed here): "The owner of any animal ... shall accompany such animal with a suitable airtight container and shall immediately upon the discharge of any fecal matter from such animal place such fecal matter in a suitable airtight container ..” … to be disposed of properly. Yada-yada.

But here’s an exacting aspect I doubt you knew; it comes at the very end of this ordinance paragraph (my italics). “The disposition of such fecal matter shall be accomplished by placing the sealed container in the trash or garbage receptacles ... or by burying the said fecal matter and covering the same with at least four inches of earth.”

I’m sorry but that's just the type s*** that strikes my funny bone. Of course, I’ll now better understand when I see a guy walking a dog with a pooper-scooper, a burp-able plastic container, a shovel and a ruler.

Now I have to add that, per ordinance, gathered fecal matter must be disposed of “only upon property owned or leased by the person in control of such animal.” I'm guessing that means I can't track down the dog-disliker and direct everyone to bury pooch's poop in her yard ... four inches down, of course. 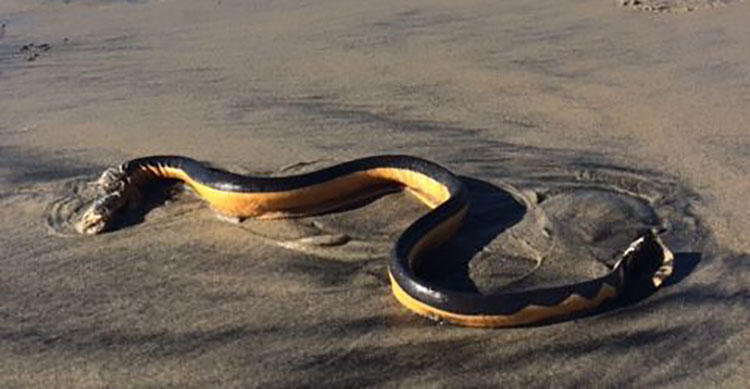 For the third time in a year, a venomous yellow-bellied sea snake (Pelamis platura) has washed ashore in California, which is noticeably far from its usual stomping ground.

The 20-inch snake was spotted in Coronado, California's North Beach on Tuesday afternoon, city officials say. Although the serpent was alive when lifeguards were alerted to its presence, it died shortly afterwards.

The city will turn the animal over to the Scripps Institution of Oceanography for research purposes.

There have only been four total reported California sightings of the elusive creature in three decades, three of which took place within the past year. The snake is generally found further south, and is relatively common throughout the Pacific and Indian Oceans.

The Surfrider Foundation, which organized a December 2015 event where another snake was found, posits that changes in water temperature spurred by this season's strong El Nino likely "enticed" the animal to swim farther north than usual.

In the open ocean, the snakes can be found in groups of several thousand. According to the IUCN, the animals congregate just beneath debris slicks that "consist variously of debris, foam and scum brought together by converging water currents." The creatures feed on unassuming fish that seek shelter beneath the floating groups of serpents, which resemble floating driftwood from underneath.

The snake can live for up to seven months at at time without water. Because it cannot drink saltwater, the animal must wait for rainy season, when it rehydrates by drinking from a "freshwater lens that forms on the ocean surface during heavy precipitation," according to a 2014 study in Proceedings of the Royal Society.

READINGS FROM THE NORTHSIDE 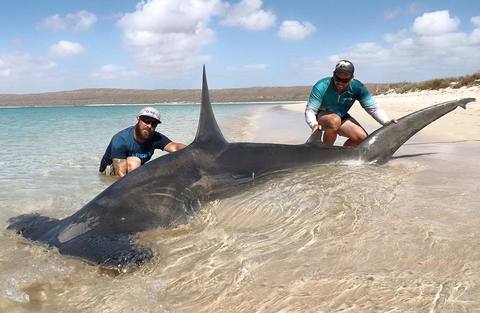 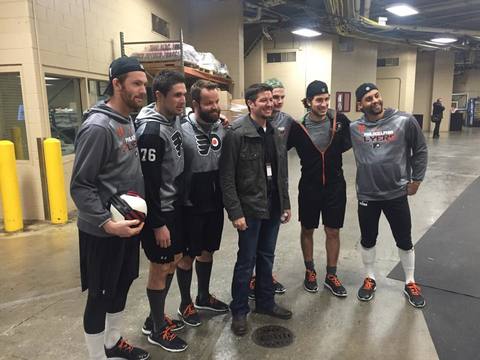 Martin poses with some of the Philadelphia Flyers before the game tonight!

This is not photoshopped ... though I have to think this adds a lot more stress during catch-and-release. If this fish wasn't spent, it would shishkabob the snorkler. 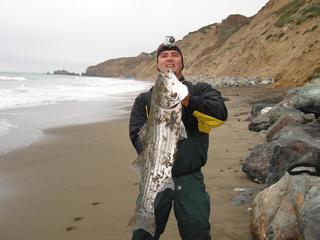 On this day I catch this "MONSTER STRIPER" on the Beach using a LIGHT TACKLE ROD while SURF FISHING / BEACH FISHING,,,,This was just another one of my awesome fishing adventures,,,,More to come so SUBSCRIBE NOW!!!,,,,,,,,The fishing rod that I was using is a Champion Series DOBYNS 765 SF and the lure that I was using was a Daiwa S.P. Minnow,,,,And "yes" this video was shot using my GoPro HD 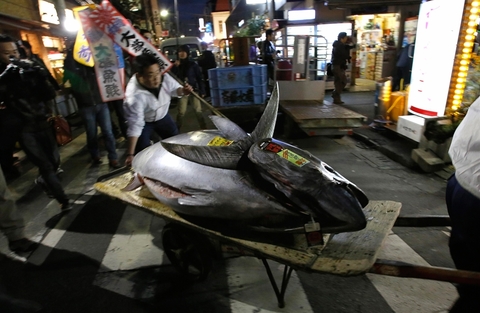 How much do you like sushi? We’re guessing now matter how much you love it, you don’t love it as much as Kiyoshi Kimura. He paid $1.76-million dollars for a tuna. Yes, one tuna. Not a school, or a 1,000-pound behemoth, but one tuna that didn’t quite weigh 500-pounds. That means he paid $3,603 per pound. That would make this the most expensive piece of sushi in the history of the planet.

According to NBCNewsWorld, “The fish’s tender pink and red meat is prized for sushi and sashimi. The best slices of fatty bluefin — called “o-toro” here — can sell for 2,000 yen ($24) per piece at upmarket Tokyo sushi bars. Japanese eat 80 percent of the bluefin tuna caught worldwide, and much the global catch is shipped to Japan for consumption.”

Tim McCarthy and I got into some nice blues off Beach Haven that evening. They're good fighters and they grab the hook better than a weakfish. Fun! ~1974. Dirty Little Secrets: In Your Fish


According to NJ fish consumption advisories, it's safe for men to eat one, eight-ounce catfish from the Newark Bay per year, and nothing from the Lower Passaic.

Standing on the bank where the Passaic River meets the Newark Bay in New Jersey, Oswaldo Avad reels in a small bluefish and a piece of a grocery bag.

“One piece plastic and one fish,” Avad said in broken English.

The Passaic River is one of the most contaminated bodies of water in the country. More than 100 companies are potentially responsible for dumping toxic waste in it for decades before that was outlawed.

Eating any fish from the Lower Passaic can cause cancer, liver damage, birth defects and reproductive issues. But Avad does it all the time.

Now, some of the companies responsible for polluting the Passaic are funding a fish exchange program.

Every Saturday between June and October, residents can bring their contaminated catch to a tent in Lyndhurst and swap it for clean, healthy tilapia being raised in a greenhouse in Newark. But in 2015, none of their 300 tilapia reached harvest size, so the polluters handed out frozen tilapia fillets from Costco instead. And they’re not sure how to dispose of the contaminated eel, carp, perch and crab they've collected.

Byproducts from the manufacture of compounds like Agent Orange and hydraulic fluid were dumped in the Passaic. Fifty-four companies who are potentially responsible, including Pfizer, Rubbermaid and Tiffany & Co. have combined to form a group called, “The Lower Passaic River Study Area Cooperating Parties Group.”

They’ve spent $1.1 million voluntarily funding the fish exchange and greenhouse project. The waste produced by the fish is also used to grow lettuce and herbs for a local food bank.

“It will be years before the fish can be consumed safely,” said Jonathan Jaffe, a spokesperson for the polluters. “So until that time we are trying to reduce risks to the most vulnerable in our community.”

Since June, the polluters have prevented just 170 contaminated fish from being eaten.

Opponents say they’ve hardly made a dent. And all the contaminated fish they've collected are now sitting in a freezer in Newark with no disposal plan.

“They could just go to a landfill,” said Any Rowe, an environmental chemist at Rutgers University who runs the fish farm for the polluters. “They could be buried somewhere in New Mexico. There are all kinds of ways to get it out of Newark.”

Advocates think the fish exchange is a distraction tactic to avoid cleaning up the Passaic. but the polluters and Walter Mugdon with the EPA agree the fish swap is not a solution.

The EPA wants the polluters to replace two feet of toxic mud from the river-bottom with clean rocks, sand and gravel. It’s a $1.7 billion clean-up — one of the largest proposed sediment removals in the history of the EPA’s Superfund program.

The polluters want to fund a cheaper, targeted clean-up that spokesperson Jaffe calls “a sensible alternative” that would “use science to direct the remediation.”

Jaffe said that the EPA’s proposal is, “destined for years of conflict and litigation.”

But the EPA says the polluters don’t get a say.

“We make the decision,” Mugdon said. “That’s not something that we negotiate."

Oswaldo Avad eats more fish from the state's contaminated waters than what is considered safe by the state.

Meanwhile, it could be decades before the fish is safe to eat again. And residents like Oswaldo Avad don't often think of the potential health risks.

"I've been eating this fish for eight years," Avad said. "I feel fine."