Wednesday, August 17, 2016: The ocean has been west-winded into relative smoothness

Below: This shark is far from attacking. Instead, it's using the paddleboard presence to attract prey. Paddleboarders frequently see marine life attracted to the shadow just below them. Sometimes it's for cover and sometimes, as is this case, as an ambush point.

Below: "Nobody saw that, right?"

Wednesday, August 17, 2016: The ocean has been west-winded into relative smoothness. However, yesterday’s south winds once again tainted the beachside surf. This time it really shouldn’t take long for the brown water to get pushed up over the sand, allowing the damn-fine water just off the beach to return to its happy place. Yes, the ocean likes offering good things to its human friends. It’s the storms and winds that make it cruel-looking.

A quick repeat that the discolored water does, in fact, get washed ashore, so to speak. Countless times I have watched the clean-water line drive the dirty water beachward. There is no mingling or gradual lightning of the dirty water, it simply gets powered out of the picture via the beachline, where the sand filters out any and all discoloration.

The light west winds might last all day and will offer great surfcasting potential should the cleaner water move in. In fact, the sharking potential tonight – factoring in water and full moon conditions -- should be epic. Yes, a bright night helps the sharking cause, though mainly for us humans. The sharks themselves ain’t big on sight-hunting. However, they have excellent short-range sight in the dark. I guarantee they like a full moon also – though after seeing the video of killer whales dining on a shark like it was an appetizer, even the alpha boys in gray have to keep an eye open for alpha-plus predators.

A few folks asked me about booking shark fishing guides. I didn’t want to go name-specific. I simply told them to check in here, where I often show the names of regular Facebook shark charmers … uh, better make that shark charters.

By late today or tomorrow, approaching high tide, we should be able to totally target kingfish. Surf is small enough. I’m not saying they’re going to be out there but they had been fairly thick in the surf prior to the protracted dirty-water period we had.

Also, I likely can’t get out to surfcast today so somebody please throw out some small to medium metals to see if any Spanish mackerel (ultra-high-speed retrieve) or spike weakfish (moderate-speed retrieve) are around.

Hey, when plugging in any manner, a huge part of presenting a plug/metal is to go through the entire retrieve-speed gamut. It’s working the water column.

I catch hell for saying this but that’s why I’m not big on teasers, especially when throwing lighter artificials. They take away from the ability to visualize the sinkage speed of an artificial by slowing its decent. Teasers also greatly increase how quickly an artificial rises up with just the smallest increase in retrieve speed. The purest plug/metal/jig retrieves are teaser-free. Then, when purity alone isn’t working, add a teaser to see what might salute. Never use bait. JUST KIDDING!

Below: Boy, does this look like fun. It's a long way from the sod banks of The Dike ... though a touch similar. 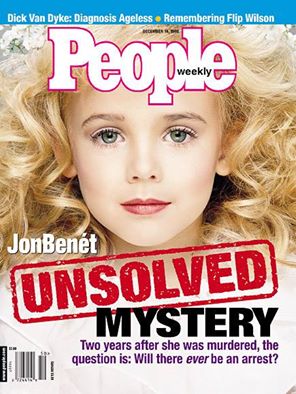 BEEN BUGGIN’ ME FOR YEARS: I’ve seen murders - mass, serial and otherwise --come and go, those oft-ugly cases fading away like shriveling maggots in the sun. However, one hideous murder has bothered me, unabated, for 20 years. And I’m far from the only one.

I can’t count the times the JonBenét Ramsey killing reappears in my mind, sometimes with me somehow cracking the unsolved case. The strangulation and bludgeoning of the six-year-old child beauty queen didn’t just shock the entire world, it left us all abysmally hurt and distressed.

The family of the Georgia-born sweetheart had moved to Boulder, Colorado, to further JonBenét’s, let’s say, modeling career. The family admitted they saw far more in the child’s future than just kiddie-level beauty contests. Hollywood was already eyeing the young girl. And for good reason.

JonBenét was first-place pretty and big-screen talented, so much so that folks like myself have never strayed from the near certainty that her beauty and parent-guided career pursuits were part and parcel to her murder.

When the initial disbelief of her murder became an angry cry for justice, things remained ugly. Days and weeks ticked away from the first 48 and a murder case that any good detective would define as highly-solvable went not only unsolved but extraordinarily clueless.

Finger pointing began -- with the family under the most convenient gun. The only problem was nobody in the family did it. Polygraphs and DNA testing ruled them out. Unidentified DNA closely tied to the immediate murder scene bore no resemblance to the family’s DNA. Nor did it match and DNA on the books.

Admittedly, I’m going with the media-presented findings, even though every shred of evidence has since been scrutinized and continuously re-explored by the greatest investigatory agencies in the world, from the FBI to Scotland Yard.

Expectedly, there is an abiding belief that detective work at the local level was flawed, possibly to the point of polluting the crime scene, ruining future efforts to reexamine the scene.  I’m not as critical. Any case that goes unsolved and eventually turns “cold,” meets the same criticisms. This case just happened to have the whole world watching.

So why am rehashing this entire ugly case? As if Hollywood sees some sick potential in its 20th anniversary, a rebirth of JonBenét Ramsey’s death has been serialized. In September, CBS will be presenting a six-part “docu-series” entitled The Case of: JonBenét Ramsey.
Per CBS: “The Case of: JonBenét Ramsey a six-hour limited event docu-series that re-examines the unsolved JonBenét Ramsey Murder, debuts on Sunday, Sept. 18. The unscripted, limited run series comes from Emmy Award-winning Executive Producer Tom Forman (“9/11,” “48 Hours,” “Extreme Makeover: Home Edition”) and his company, Critical Content. The series will re-unite original investigators of the infamous case, accompanied by new experts, to re-examine the unsolved case from 20 years ago.”

In what might be considered a borderline tasteless build-up, CBS has put out an attention-grabbing “trailer,” making the docu-series into can’t-miss TV. The cost of commercial time is surely formidable. Hopefully, some of the profit will go to a worthy cause.

Required venting done, I’m getting a sense that this documentary – already front page news in “People” and numerous other publications, might offer a modicum of closure, so this murder will no longer stick in my craw so badly. If, in the six-hour end, nobody is consequently punished for JonBenét’s murder, this high-profit docu-series will be nothing show-time theatrics.

New Gretna, NJ - The Senate Environment and Energy Committee and the Assembly Environment and Solid Waste Committee will hold a joint meeting at 10:00 a.m. on Thursday, August 18, 2016 at Toms River Town Hall, 33 Washington Street, Toms River, NJ.  Among the several bills to be heard includes S2490 sponsored by Senators Bob Smith, chairman of the Senate Environment and Energy Committee, and Christopher Bateman, which would provide protection of the public's rights under the public trust doctrine as it pertains to tidal waters and adjacent shorelines. While not going as far as the Recreational Fishing Alliance (RFA) would have liked in terms of specifically addressing vacating of street ends, ensuring reasonable parking, requiring 1/4 to 1/2 mile access points or including an exemption for marinas, the bill is a step in the right direction.

At the heart of the matter is the longstanding and inviolable rights afforded to the public under the public trust doctrine to use and enjoy the state's tidal waters and adjacent shorelines for recreational uses.  Some municipalities have habitually denied the public's rights to these areas.  New Jersey has a legal obligation to promote, protect and safeguard the public's rights to reasonable and meaningful access to tidal waters and shorelines.  In response to a legal challenge of their 2012 rules,  New Jersey Department of Environmental Protection (NJDEP) is currently proposing amendments to rules that govern public access to tidal waters and shorelines under the Coastal Zone Management Rules.  While that process is taking place, the public is left with weakened or no regulations that protects their rights to tidal waters which is of great concern to recreational fishermen.

At the meeting on Thursday, RFA will be requesting that the bill's sponsors amend S2490 to provide an exemption for marinas consistent with language included in the 2012 NJDEP public access rules.  The marina exemption was widely supported during discussions when the 2012 public access rules were revised.  Unfortunately, that language was not expressively included in S2490 when it was introduced.

"Marinas serve as critical infrastructure for the recreational fishing industry and provide access to tidal waters for our fishermen, our charter boat operators and head boats," explained Jim Donofrio Executive Director of the RFA.  "It is essential that S2490 is amended to ensure that an excessive liability burden is not placed on marinas or that these facilities are denied the ability to expand."

In a letter submitted to Senator Smith, Marine Trades Association of New Jersey Executive Director Melissa Danko stated that "the very nature of their (marinas) business operations ensures that the public has use of public trust waters.  In order to do so, however, marinas must be able to reasonably control and manage their property."  The NJMTA is also requesting an amendment to S2490 to exempt marinas.

What is clear after reviewing S2490 and proposed revisions to the DEP public access rules is that this issue will not be resolved in the short-term.  RFA is encouraging anyone who has the ability to make Thursday's meeting in Toms River to attend and advocate for the public's rights to tidal waters and adjacent shorelines.

"Getting this bill passed would be a step forward for land based anglers but there's more work to do,"  stated Greg O'Connell, National Access Coordinator for the RFA.

Below: I got this close (50mm lens) to a cluelessly dining white-tail -- then gave a "Boo!" Hey, had I been a hunter it would have been a "Boom!" I taught this deer a life lesson: Stay the f*** alert! 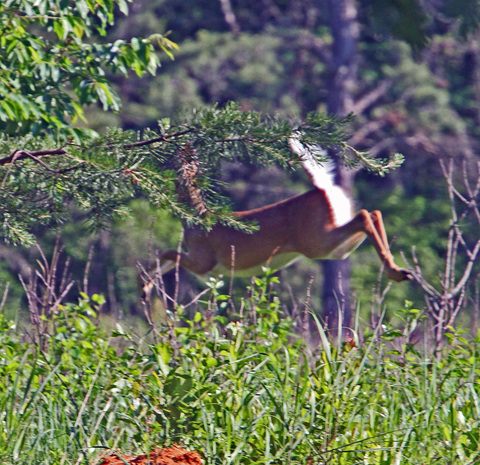 Did I just smell a deer jump?! 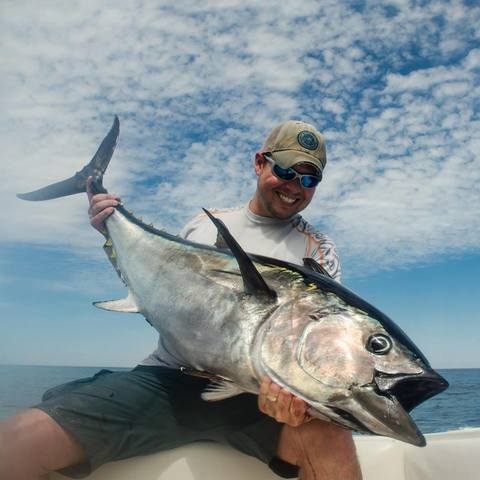