Forget to bring your rod just one stinkin' time ...

Wednesday, August 02, 2017: Cool storm front late today. It’s not going to be much of a factor, wind-wise. Per summer usual, grab the calmer winds in the a.m. and get back in my mid-afternoon when SE’erlies will get going pretty briskly.

Headboats and charters have been having wild fluke trips. Sure, things can change overnight but this hot-hooking roll has been pretty dang consistent.

Yet more reports of decent snapper fishing in Barnegat Bay. They make good eating when cooked whole, which is the only way to respectfully get what meat is there.

¼ tsp. cayenne (optional, necessary for me)

Put this mixture, or one of your own devising (I often use half flour and half cornmeal or cornflower) into a plastic bag, toss in four fish and shake the bag until they are coated. Remove and cook in hot oil over medium heat until nicely brown and crisp on both sides and keep warm in a 175-degree oven as you fry the next batch. I usually use peanut oil, canola oil also works fine, and butter is delicious but you must watch it carefully to keep it from burning.

I often cut a couple of medium-sized tomatoes in half, dip the cut edges in the seasoned flour left over from coating the fish, and sauté them in the same pan with the fish, either simultaneously or after the fish are done and keeping warm in the oven. When the breading on the tomatoes is nicely browned, I turn them over for a short time to cook through.

Serve this combination with a glass of orange juice, a piece of toast and a cup of coffee, and you will be set to take on the day that unfortunately probably won’t get any better than breakfast. But who knows, you might get lucky. A snapper bluefish looks just like an adult bluefish, down to the yellow eye. A freshwater spinning outfit is perfect for catching the 8-inch bluefish.

Below you’ll see a news story about bogus eclipse-ready sunglasses.

I came across this useful article after experiencing a minor disagreement with a fellow who lives to fish. In his living-to-fish mindset, he spares no expense, which comes easy to him – retired long before his time, via tech investments. Anyway, he tried to tell me his insanely-costly fishing sun glasses are good enough to just look up and watch the eclipse. “No way,” I retorted, knowing of what I speak, having done stories about fishermen going half blind from decades of reflected sun bearing down upon their thought-UV-proof sunglasses. I also did a write-up on the even more eye-dangerous reflected sunlight, bouncing up off the water and snaking under sunglasses -- and right into pupils jacked open by the darkness offered by the glasses.

Anyway, we parted in friendly disagreement, with him heading off to some Hotsy-totsy North Jersey poolside bash and me hightailing back to the computer to prove my point. With great relief --  I hate to lose a disagreement -- I quickly and easily confirmed and fortified my stance. I Googled page after page of technical reports, all panning even the finest sunglasses as being totally eclipse inefficient. I’ve emailed him a few, knowing he's hopelessly addicted to his Smartphone -- which brings him the now round-the-clock worldwide market updates. Hell, it's already tomorrow in Hong Kong.

Further below is one of the simpler articles I sent. It is still enough to open one’s eyes to eyeing the eclipse.

One poor-man chuckler for me is the fact that multi-hundred-dollar designer sunglasses, when it comes to eclipsing, can’t hold a candle to dollar-store level glasses made just for solar swatting.

“Eclipse glasses are different than typical sunglasses, which don’t filter out enough of the UV rays to make looking at the sun safe. Eclipse glasses look a little like the old, flimsy 3D glasses, but instead of blue-and-red lenses, they come equipped with two dark, filtered lenses that protect against UVA and UVB rays.

“Eclipse glasses are also pretty cheap, starting at around $1.99, and relatively easy to come by, with major retailers like Walmart stocking up for the big event. They are also available online.” 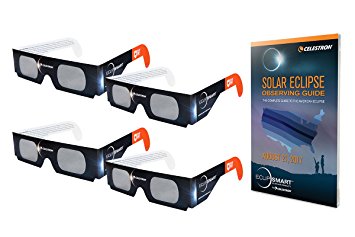 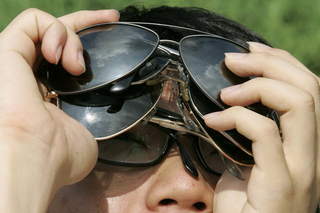 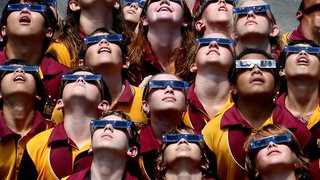 Fake Solar Eclipse Glasses Are Flooding the Market: How to Stay Safe

Update: The Federal Trade Commission has released a statement with safety guidlines for solar viewing glasses.

Advertisementyou're planning to view the
total solar eclipse on Aug. 21, make sure you've got the right safety gear.

Phony eclipse glasses are currently flooding the marketplace, according to the American Astronomical Society (AAS). This counterfeit equipment falsely claims to meet the international standard for safe solar viewing, which is known as ISO 12312-2 (also written as ISO 12312-2:2015).

So how do you know that your eclipse glasses or handheld viewers are safe? You can't really check them yourself; doing so requires pretty high-tech lab equipment. But the AAS has done such legwork for you and identified a number of reputable suppliers, including (but not limited to) American Paper Optics, Rainbow Symphony, Celestron and Daystar. You can also trust the businesses and other organizations that sell gear made by these companies, AAS representatives said. (There are many such retailers, including Wal-Mart, Lowes and Toys R Us.) [The Best ISO-Certified Gear to See the 2017 Solar Eclipse]

You can check out the AAS' full list of trustworthy suppliers and vendors here. NASA also has information about eclipse glasses and safe solar viewing; find it here.

Also, if you haven't already gotten your viewing gear, you probably want to do so. It's late enough in the game that some online stores can't guarantee delivery until after Aug. 21. (But you can buy glasses or viewers in person, at one of the approved retailers listed by the AAS.)

Reminder: You need such specialized gear to view the uneclipsed or partially eclipsed sun; run-of-the-mill sunglasses, even extra-dark ones, won't cut it. If you look at the sun without certified safety equipment, serious and permanent eye damage can result. (It is safe to look at the totally eclipsed sun with the naked eye. But you still need to exercise care; totality lasts just a few minutes, so make sure you get the timing right.)

Even if your eclipse glasses are certified, you shouldn't use them if their lenses are damaged or not securely fastened to their frames, AAS representatives stressed. (Also, never use glasses or handheld viewers with binoculars or telescopes; such instruments require special filters for safe solar observing.)

It's not a big surprise that counterfeit equipment has come on the scene, considering the buzz surrounding the Aug. 21 event — it's the first total solar eclipse visible from the United States mainland since 1979.

On Aug. 21, the moon will completely blot out the solar disk in 14 states, from Oregon to South Carolina. The "path of totality" will be just 70 miles wide (113 kilometers) or so; the rest of North America will be treated to a partial eclipse, as will parts of South America, Europe and Africa.

About 200 million people live within a day's drive of the path of totality, according to Space.com skywatching columnist Joe Rao. But even people who don't make the trip will still be able to witness the event online, thanks to webcasts planned by a variety of organizations. And if the Aug. 21 event somehow passes you by, don’t fret: Another total solar eclipse is coming to the U.S. mainland on April 8, 2024.


Editor's note: Space.com has teamed up with Simulation Curriculum to offer this awesome Eclipse Safari app to help you enjoy your eclipse experience. The free app is available for Apple and Android, and you can view it on the web. If you take an amazing photo of the Aug. 21 solar eclipse, let us know! Send photos and comments to: spacephotos@space.com. 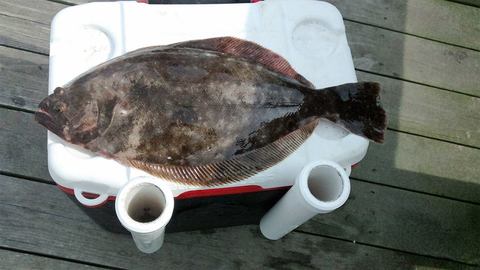 Been crazy busy the last four days with seven trips during that time. Spending that much time on the bay, during many tide cycles, you kind of get the pulse of the ebb and the flood. So much, that you don’t even need to look at a tide app. All you need to do is to pay attention to nature’s subtle cues and sync your clock to hers. Having fished in Florida many times years ago I started subscribing the to the Florida Sportsman magazine. Even though it was geared to fishing another State, dah that’s obvious, you glean information from the articles and apply them to your area. One resonating theme was the benefits of live bait. Sometimes in Florida, you do not even start fishing until you “make bait”. Now, having long subscribed to that theme, I do what it takes to make bait. And sometimes the rewards from those benefits are reaped to the extreme. Case in point Tuesday’s magic hour trip with Michael Petruzziello. Before we started fishing I had him and his friend Dianne make bait in the form of snappers for the last part of the trip when the tide would be perfect. Coming across what was literally and acre + of snappers blitzing we quickly put a good dozen in the Debbie M’s live well. After messing around with some adult bluefish around the inlet we switched over to fluke fishing. In doing so, and I kid you not, I said to Michael “I just have this weird feeling we are going to be able to catch a really nice fluke tonight”. With two live snappers unhappily sent to the bottom, I positioned the boat so that the lines were in the correct drift. Shortly thereafter, Michael, “I think I have a fish or I am stuck on bottom”. To which I replied, “you have a FISH”. With the St Croix rod doing double duty, I knew immediately he was battling flukezilla. When we got first glimpse of the denizen from the deep I instructed Michael, not the take the fishes’ head out of the water and work with me to get it to the net. I’m not sure if my first try with the net was a big miss or fluekzilla saw the net and dove down 10 feet. None the less, on the second pass the beast was in the net and we welcomed it aboard the Debbie M. Taped out at 30” and coming in at 10 lbs. 2 oz. it was a true doormat. This is the second doormat I have put a client on in the last three years. The last one was 11.5 pounds and fell to a live 8” peanut bunker. There’s something to be said about making bait.

We have been running afternoon shark trips and doing very good. We are having a blast catching three to four foot brown sharks on 20 and 30 class tackle. So far all the action has been within five miles from the inlet. All catch and release. We go on the drift, deploy a bucket of chum overboard to create a slick, and set out a rod for everyone with a balloon bobber. We did this on Thurs and Fri afternoon and on each trip we had the sharks visibly eating at the chum can.


Monday, Aug 7, is available and the early look at the marine forecast is favorable so we could be headed offshore for tuna, Open Boat or Charter. The day is available to fish inshore or offshore.