"He's in real trouble now, Mel. And he only has himself to blame."

Below: Delighted that he had so masterfully hopped the fence, Elgin had somehow forgotten why he was in such a rush to begin with.

Below: This is the area near New South Jetty that will be filled in with bay bottom material next fall. Photo Debbie Jacobs Lazare. Wednesday, April 27, 2016: It’s a good day to talk weather since winds have backed off dramatically and even though there could be some fog – a sign of lighter winds – it won’t be all that bad for fishing. We will see a blast of harders winds starting late tomorrow but they’ll back off within 24 hours and this weekend could host some of the calmer winds in many moons.

The blues are still making rounds. And that’s the best way of putting it since you can’t just hit a spot and expect to have slammers clambering to grab bait or plugs. I’ve been doing the blues alone.

My only luck has been mid-Island oceanfront and BL. Three blues total. Tempted to keep same but I still have to clean my dehydrator (for jerky) from last usage. All went back. I still swear by jigheads (heavier if surf is rough) holding just about any cheap plastic tails, regardless of their condition. I went through a total of five rust-stained shads for all my fishing sessions. That leaves me about five pounds of plastics I’ve accumulated at auctions and garage sales. Obviously, when fishing gets more serious, it’s time to open the GULPS. I never come across those anywhere but in shops.

Below: I got at least three dozen of these in a bag -- one dollar -- at a garage sale ... though not is as good a shape as the Mister Twister seen here.

I tried some plugging but my lone Van Staal is kinda stiff. I hear this is common, though I’ve owned mine for years and this is the first signs of sluggishness when reeling. I have, off and on, had the famed Van Staal stall. You're reeling and it just hits the brakes, usually due to some sand in the system. I still can't believe how much that reel has taken from me and just keeps on tickin'.

Below: How my model looked when it was first born ... NO longer. I'm down to base metal. I can’t get into details (nor do I want to) but there is some decent nighttime weakie fishing, far better than in recent springs. By law, this is primarily a catch-and-release fishery, with only one fish a day – 13 inches or larger – allowed. For many of us, photo-and-release is now almost as good as keeping a fish. And spring sparklers, in spawn regalia, are sights to behold. 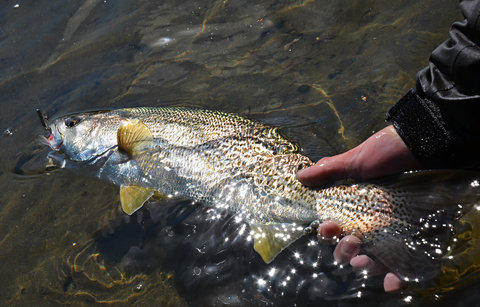 I want to pass this regulation on to a buddy who didn’t quite believe me about the laws -- in his case it's regarding tog. NJ regulation reads: The filleting at sea of all fish with a size limit, or any species of flatfish, is prohibited. 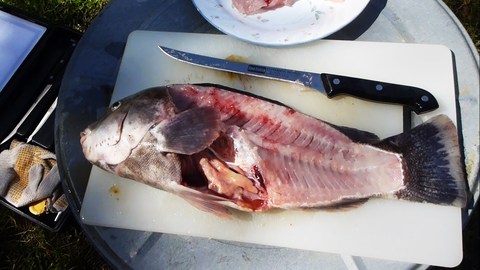 There is an exception for fluke. You can keep one of legal size for bait providing you keep the rack as proof of legal size. Obviously, summer flounder season is still a ways off.

Also, charter and headboats can get a “Special Fillet Permit” via NJ Fish and Wildlife’s Bureau of Marine Fisheries. I see where the NJ Division of Fish and Wildlife still uses the expression “Party boat” for headboats and charters. Many years back, I was asked nicely but firmly by the industry that the “party boat” expression be dropped. I fully agree. It reeks of drunken anglers, well, partying more than angling.

This is head boat: This is a party boat: (Not that there isn't something to be said on its behalf ... just not in an angling sense.) 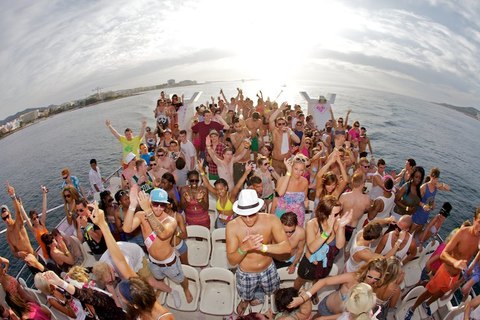 As I vicariously fish through the immense numbers of photographs now coming my way, I once again suggest that, if at all possible, fish be rinsed and boat decks de-bloodied before pics are taken. It simply gives a better look at the fish. And should a fish be one for the books, a clean shot can live in history. Also … smile. Catching fish is dang good thing.

Todd has been this way since I've known him. 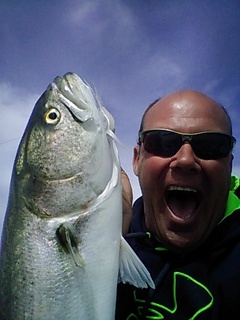 This sometimes happens when I'm working late but I was looking at satellite images of sand shoaling patterns west of Barnegat Lighthouse and I suddenly see this old fisherman's (pirate's) face formed in the sand ... Tell me it's not just me. That's high bar harbor feeling around in his nostril. 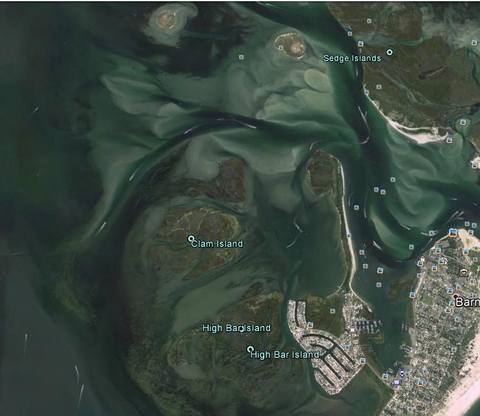 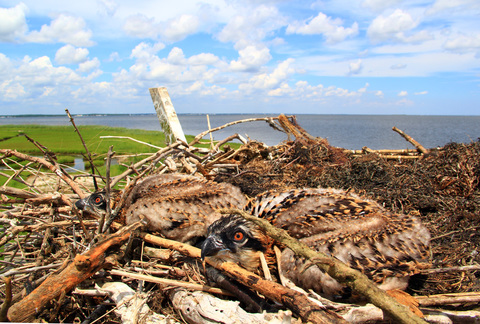 Any wildlife photogs want to go get some photos of ‪#‎ospreys‬ building nests on people's houses? It would be great to share with our new guidance document: "Living with Ospreys in New Jersey:
A guide for the removal, relocation, and placement of osprey nests"

Already showing in our nape of the ocean (yesterday) ... 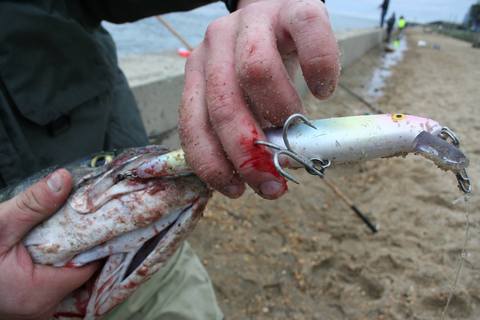 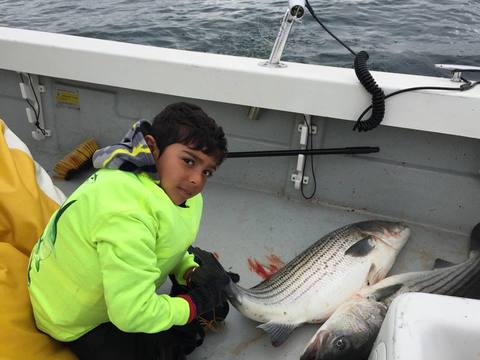 This shark will certainly have something to talk about after release ... 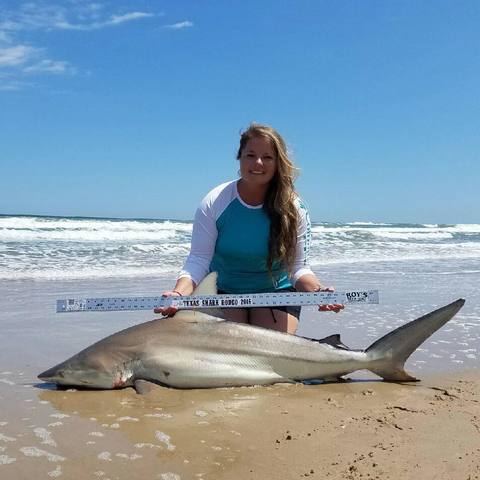 Fish Monger Tues 4/26 Blackfish Full Boat Limit (10 man) to 21 lbs!!! Only had a 7 man crew today so told everyone we were going to try a slob spot and not go north with the wind forecast and bite we had yesterday... turned out with no wind at all to start and they bit in the area they didn't for us yesterday ( of course) was so nice didn't even have enough to keep ropes tight for half the day. Wa
snt a total loss bc we got what we were looking for. First came a 8 and 9lber few other keepers amd a nice cod... Flopped off it... put out the anchors again and glad I did. Bc as soon as Joe Zagorski hooked the fish we knew it was a giant... up to the net came big bertha... we all just stared at it... and there she was a 21 lb giant female!!! We tried our hardest to revive n release her but she wouldnt swim. That was last fish we caught there. Finally got some Breeze n foumd some life...sat right on the anchor and the fish started coming. Went to work till and scraped up a full boat limit. Guys worked hard for em. Congrats again to Joe on the fish of a lifetime!!! 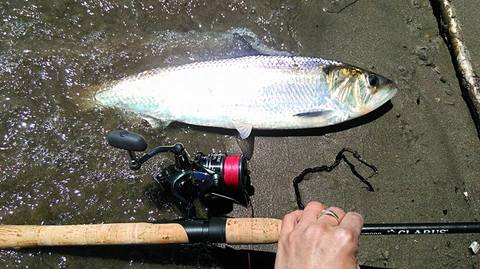 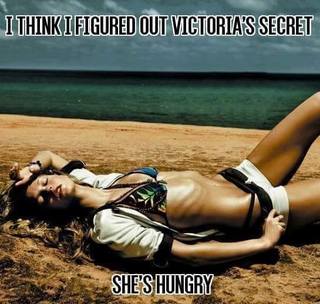 Sorry, I can't resist sharing this pic sent to me ... Whadda ya thing Michael C.?