Below : Blessed are the peacemakers ... or else. The ASMFC's Menhaden Board's chair Robert Boyle from South Carolina said the latest assessment has set the stage for them to discuss how they want to move forward in sustainably managing Atlantic menhaden.

The Atlantic Menhaden Management Board approved the 2014 benchmark menhaden stock assessment for management purposes at the winter meeting of the Atlantic States Marine Fisheries Commission. The meetings was held this past week in Alexandria, Virginia.

The assessment found that menhaden are not being overfished and overfishing is not occurring relative to the current maximum spawning potential. The reproduction capability — or fecundity — is 71-percent higher than the target level.

The Board's chair Robert Boyle from South Carolina said the assessment has set the stage for them to discuss how they want to move forward in sustainably managing Atlantic menhaden.

"This discussion will include Board management objectives that address the needs of the reduction and bait fisheries as well as the ecological services menhaden provides as an important prey species," Boyle said in a prepared statement.

Wednesday, April 01, 2015: This is initial word that the 14th Annual Simply Bassin’ Tournament will begin on May 2 and run until June 27.

Participating shops will be Jingles Bait and Tackle, Captain’s Quarters, Fisherman’s Headquarters and Surf City Bait and Tackle.  The entry fee is a paltry $20, the same amount you can pay for lunch at fast-food restaurant. I hope to have the forms into the shops within the next couple weeks. This year the already low-kill event will offer prizes for the top four striped bass. 1) $1,000, 2) $500, 3) $300, 4) $200. 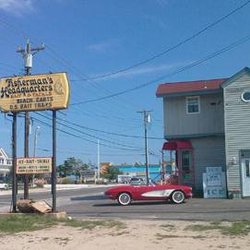 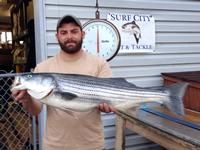 As I always announce, this event involves some of the best anglers tapping into some of the biggest stripers of the year. Many a 50-pounder-plus has come to the Simply Bassin’ scales. Contestants in this event are not only folks itchin’ to get fishin’ in spring but include many casters who actually can’t always make the fall LBI Surf Fishing Classic. That fall event now an official supporter of Simply Bassin’.

The entire concept of Simply Bassin’ is offering damn decent cash -- which is as good as money -- to anglers with spring stripering smarts and/or pure perseverance. I’ll be the first to admit that the fishing prowess of those entering this event is way up there. At the same time, the event has had many a big winner who entered just to show the top-casters how it’s done.

While any fish over 32 inches can be entered to launch the event, the trick is to challenge the names on the four-place leader board. Contestants should always check the leaderboard to know what a bass has to be to break into the top four.

A rules sheet will be given with the entry form but the event is pretty barebones: Obey laws and regulations and catch bass from the beach.

I re-upped my NJ Saltwater Recreational Angler Registry paperwork today -- in less than 70 seconds. It’s that fast and easy on-line. 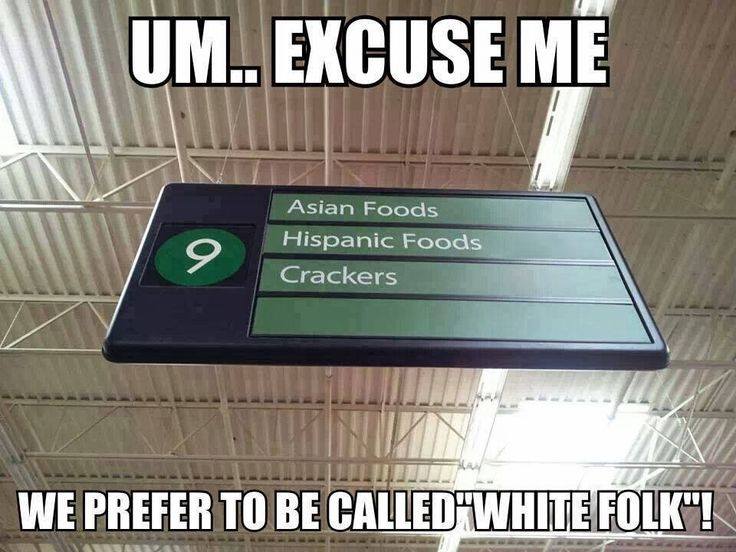 AILING ALEWIVES: It’s not easy being an alewife nowadays.  No, I didn’t say an ill wife, though I imagine that’s no picnic either. I’m talking about the herring-like alewife fish.

Long with its similar-looking counterpart, the blueback herring, these once-abundant school fish are now in a world of hurt.

The two species, often referred to as river herring, are seemingly losing out to overfishing, loss of spawning habitat and chemical changes in water.

Discovering the exact things ailing the alewife and blueback herring are at the root of the Barnegat Bay Partnership and Rutgers University co-receiving $78,000, earmarked for surveying the two closely related anadromous species. The money comes from the Atlantic States Marine Fisheries Commission.

The wording of the grant: Barnegat Bay Partnership and Rutgers University will receive $78,000 to conduct surveys and collect data to help improve our understanding of historic and

I saw many a river herring locale bite the dust. For a short stint, I was among many striper-seeking anglers who routinely collected the baitfish in the spring. Cluelessly, we traditionally nabbed them as they worked their ways up our local creeks to spawn. We were egged into cluelessness by the fact a single herring sold for $3.

In recent years, the state of NJ has damn near pulled the plug on the taking of river herring. The laws state, “Effective immediately, no person shall take, possess, land, purchase, sell or offer for sale any river herring (alewife and blueback) in the marine waters of the State.” Along with the local demise of top herring sites, like Mill Creek, I personally saw populations in my highly-secret creeks drop like a shotgun-dusted duck. That is still troubling. Those out-there spots were way to far from transfer points to be harvested. Instead I sat on branches over the water and lazily watched the herring go by in the acrylic-clear pinelands creek water. Then, as the other creeks were fished out, my creeks saw fewer and fewer spawners. You don’t have to be an environmental to know that’s a real bad sign.

Here’s hoping the funded study answer the mystery of the fast-fading herring populations. 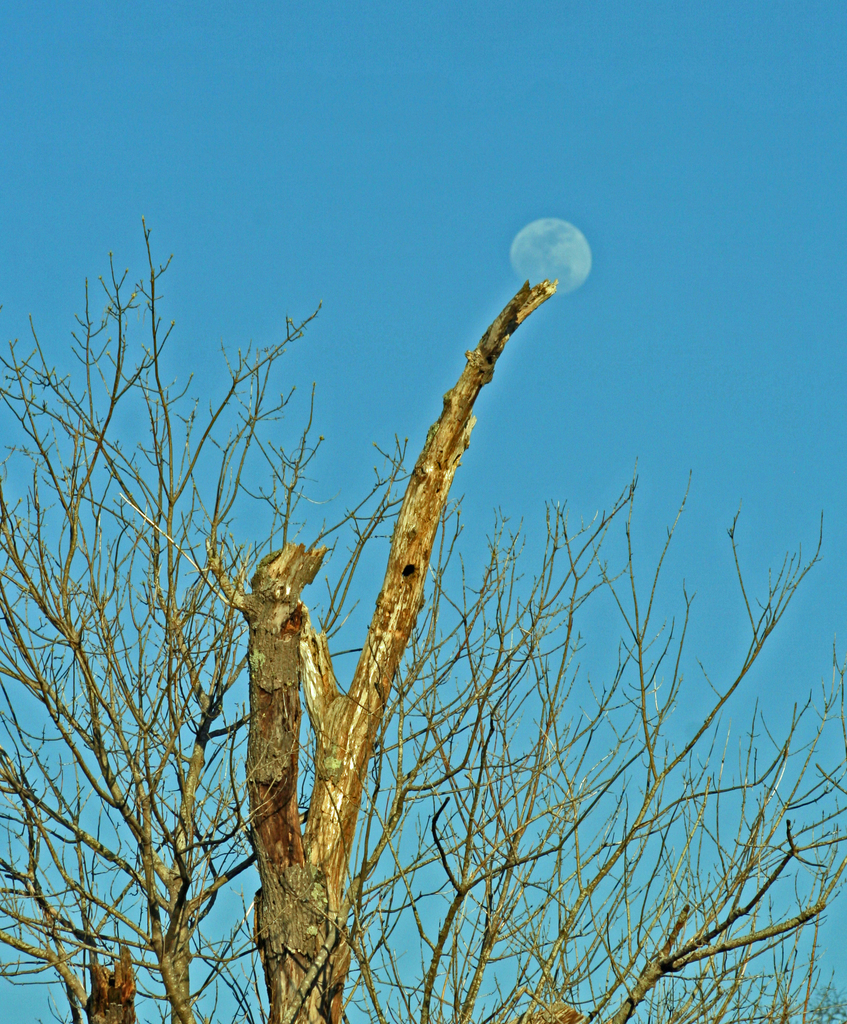 This week marked the opening of the 2015 glass eel fishing season as well as a milestone of more than ten years of improvements to the American eel stock and its habitat.

A decade of unprecedented worldwide attention and action has allowed glass eel, the juvenile form of American eel, to repopulate previously blocked habitats and maintain a decades-long stable level of recruitment. Given the success of the species and improvement in its management, the American Eel Sustainability Association (AESA) urges the U.S. Fish and Wildlife Service (USFWS) to acknowledge the American eel is healthy and not endangered.

As chronicled in AESA's new video, "Eels on the Rise," glass eel fishermen now hope to create a domestic eel aquaculture industry within the boundaries of current harvest limits in both the United States and Canada. Currently, glass eels are predominantly sent to Asian countries for farming and processing. Domestic fishermen look to bring that industry and those jobs back to North America.

AESA encourages government officials on both sides of the border to support these efforts and promote collaboration among the interested parties. The ASMFC has already created mechanisms for a special aquaculture quota, and a U.S. domestic industry can foster international standards and cooperation for eel aquaculture. Despite ten years of demonstrated, continuing improvement to the stock and its habitats, the branding of "endangered species" labels still haunt and handicap this sustainable industry.

The USFWS is considering listing American eel under the Endangered Species Act even with substantial evidence that the species is consistently improving and not in danger of extinction. AESA strongly urges USFWS and other organizations to celebrate successes in sustainability for the species and reaffirm the American eel is not endangered.