Above: Coming soon -- as it was in June, via Oceanside.

Wednesday, September 19, 2012: I unexpectedly found myself with free time this afternoon -- after going to the south end on business that never developed.

The sandbag rampway onto Holgate is astoundingly passable, despite quite the pounding by yesterday’s waves. It seems that the theory behind the sandbagging layout is holding water, so to speak. I hear there may be more bags coming to further buttress the layout.  With full moon tides advancing toward us, the bags will likely be put upon again during high tides. However, seeing how the setup held up, I’m less nervous about bouts with overwash.

Leaving Holgate early, I did a slow drive along the front beach from North Beach Haven to Brant Beach. Despite the blow, the entire stretch of beach is a smooth and easy buggy go. Of course, there was no shortage of attitudenous beach sitters eyeballing me, mainly elders. I kept cool and tried to wave now and again, even in the face of glares that didn’t just represent a dislike of me driving there but an over-all 24-7 crotchetiness toward any damn thing these too-much-time people even remotely dislike -- as in everything. Just shoot me if I get like that.

Chatting with the few anglers I saw, nary  a fish was on hand. However, to a person they raved about how good fishing has been. They aren't going to be put off by a single off afternoon.

Heard of a jumbo kingfish going for a teaser. I believe it, just have never seen it. I did have one bright point in an otherwise down day, which included the sound on my new laptop going out -- a full-blown, heavy metal catastrophe for me. I did a little water metal detecting, bayside, and throughout most of the session had squat to show. I was about to leave when I began chasing a very weak signal. It was in about three feet of water and down deep. Long story short, I dug a small but vintage 14K woman’s ring with six tiny diamonds (three) on each side of a oval faceted ruby. It was nothing overly valuable but a fine find and looks to date back to the 1940s. Virtually nothing else of value after that, short of newer coins.

Please give the following news story a read. It hits very close to home. One essential sidebar, last winter the Bering Sea had some of the lowest water and air temps every recorded.

NOAA has released data showing that for the first six months of 2012, sea surface temperatures and bottom temperatures on the Northeast Continental shelf were the highest ever recorded.  The area, from Hatteras to the Gulf of Maine,  had an average sea surface temperature (SST) exceeding 10.5 degrees C (51°F) during the first half of 2012.  This was above the previous record high in 1951.  Average SST has typically been lower than 9 degrees C (48°F) over the past three decades.

'A pronounced warming event occurred on the Northeast Shelf this spring, and this will have a profound impact throughout the ecosystem,' said Kevin Friedland, a scientist in the NEFSC's Ecosystem Assessment Program. 'Changes in ocean temperatures and the timing of the spring plankton bloom could affect the biological clocks of many marine species, which spawn at specific times of the year based on environmental cues like water temperature.'

Many species of fish change their locations in response to temperature.  This is a well known phenomenon with cod, and has been thought to be partly responsible both for the large disappearance of cod waters off Newfoundland, and also for the huge resurgence of cod in the Barents Sea.

It is quite likely that changes in temperature have been among the factors that have upended New England stock assessments on species such as Gulf of Maine cod.

NOAA says that Atlantic cod distribution in the Gulf of Maine continues a northeasterly shift, with the spring 2012 data consistent with a response to ecosystem warming. Warming ocean temperatures and the resulting impact on the distribution of 36 fish stocks was reported by the Center.  That study found that about half of the 36 fish stocks studied in the Northwest Atlantic Ocean, many of them commercially valuable species, have been shifting northward over the past four decades, with some disappearing from US waters as they move farther offshore.

In essence, George’s bank and Gulf of Maine cod stocks appear to be moving more into Canadian waters.

Friedland notes that although cod didn't shift as much as other species like hake in the 2009 study, the effects of warming water on ocean currents and other ocean circulation patterns could change that. 'Cod distribution continues to be dynamic, with northerly shifts detected in the spring 2012 data, consistent with a response to ecosystem warming,' Friedland said. 'The big question is whether or not these changes will continue, or are they a short-term anomaly?'

NOAA also said that the 2012 spring plankton bloom, one of the longest duration and most intense in recent history, started at the earliest date recorded since the ocean color remote sensing data series began in 1998. In some locations, the spring bloom began in February, and was fully developed by March in all areas except Georges Bank, which had an average although variable spring bloom. The 2012 spring bloom in the Gulf of Maine began in early March, the earliest recorded bloom in that area. A coalition of consumer groups is recommending the U.S. Department of Agriculture get tuna out of school lunchrooms after tests of canned tuna sold to schools found highly variable levels of mercury, in some cases higher than federal guidelines.

The Mercury Policy Project of Montpelier, Vt., is a non-profit working to reduce mercury in the environment. It tested 59 samples of tuna in institution-size cans and foil pouches from 11 states. The levels of methylmercury were in general close to previous tests done by the Food and Drug Administration. However, levels of mercury varied widely, even from the same can or pouch. The average methylmercury content ranged from 0.02 to 0.64 parts per million in light tuna and between 0.19 and 1.27 parts per million in albacore tuna.

"On any given day in a given school, children eating the same meal could get mercury doses that vary by tenfold," just because of the variability of the chunk of meat in the packet," says Edward Groth, author of the report, released Wednesday. It was sponsored by several groups, including the Center for Science in the Public Interest and Physicians for Social Responsibility.

Current federal dietary guidelines urge Americans to eat seafood twice a week because seafood is a healthy protein and contains omega-3 fatty acids, important for metabolism, but most people eat it once a week or less, says Gibbons.

"To suggest we're eating too much is almost comical," he says. Scaring children away from tuna "at a point in their life when they're developing their nutrition habits and their palates" is damaging.

Diane Pratt-Heavner of the School Nutrition Association in National Harbor, Md., says she doesn't believe tuna is a big issue because it's not popular on school lunch menus. She only sees it as an item in deli-style counters, mostly in high schools, where it's one choice among many.

Groth agrees that tuna isn't a huge part of school lunches, but wants to make sure kids aren't getting too much. And parents need to be aware of how much tuna their children eat, he says. Kids who eat a tuna sandwich a month aren't at risk but some children, "we don't know how many there are," love tuna and eat a lot of it, he says. Even four times a month could have "subtle adverse effects" on some children. "We're trying to put those kids on the map," he says.

The Environmental Protection Agency's maximum acceptable dose for methylmercury, a potent neurotoxin, is one-tenth of a microgram per kilogram of a person's body weight. Even tiny levels of methylmercury have been linked to learning disabilities and developmental delays in children, according to EPA scientists.

To ensure that the brains of fetuses and children aren't exposed to levels high enough to damage them, the EPA and FDA said in 2004 that women who are pregnant or might be pregnant can eat up to two meals, or 12 ounces, of fish and shellfish a week. Children should eat "smaller portions," the guidelines said.

Since the EPA adopted that standard, some studies indicate it may be too high. "Our research suggests that this limit should be decreased by 50%," says Philippe Grandjean, a professor of environmental studies at Harvard University who studies mercury in seafood. "If anything, [the Mercury Project] report underestimates the risks associated with regular tuna intake."

By the Mercury Project's measure, a 44-pound child who ate just two ounces of albacore tuna at levels the project found in some tuna would be getting almost half, 47%, of the standard. Based on the emerging evidence, the report recommends that children not eat albacore tuna, which can have more mercury, and that young children eat canned light tuna only once a month and older children only twice a month. They also suggest school lunch programs limit canned tuna servings to twice a month and phase it out, moving toward lower-mercury seafoods such as salmon and shrimp.

Fish become contaminated when mercury in industrial pollution enters waterways. Bacteria transform the mercury into methylmercury, a more biologically active and dangerous form of the element, according to the Food and Drug Administration. Fish eat the bacteria and the mercury accumulates in the largest and oldest fish, which is why long-lived and large species such as tuna have higher levels. Canned light tuna comes from skipjack species of tuna, which are smaller and often younger. They haven't been around long enough to accumulate as much methylmercury in their systems. Albacore is harvested older and therefore contains more. 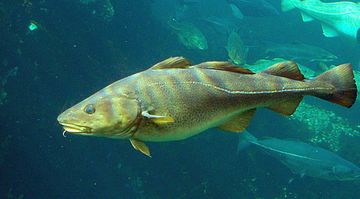 The Scottish Fishermen's Federation has angrily criticised the way that a scientific report on the number of adult cod in the North Sea has been reported in some sections of the media, which fails to reflect a true picture of the status of the stock.

The media reports, which stated there were ‘only 100 adult cod in the North Sea', are a prime example of the ‘cherry picking of facts', according to Bertie Armstrong, chief executive of the SFF.

The media was reporting on scientific research by Cefas, the government fisheries laboratory, which from catch analysis found not a single cod over the age of 13 and that there could fewer than 100 such fish left in the North Sea.

Bertie Armstrong said: “This is a classic example of the cherry picking of the facts without providing a balanced report on the true situation. According to current scientific research, the stock is showing clear signs of recovery in that the spawning stock biomass is increasing and fishing morality is decreasing. It is unfortunate that some see fit to place undue focus on certain work.

“Cod mature and spawn well before the age of 13 and so are therefore contributing to the stock biomass on an annual basis. There has obviously been an attempt to give the impression that there are few mature fish left. However, maturity is directly related to both age and size and it is recognised that most cod of 4 -5 years old are mature.”

“The fact is that scientific research is showing that the cod stock is recovering, thanks in part to the pioneering efforts of our fishermen to launch a range of conservation initiatives, including technical alterations to fishing gear and real time area closures. Indeed, only recently our prawn fishermen and netmakers have developed trawls that have reduced fish discards by up to 70 per cent.

“The true situation is that our conservation efforts are helping North Sea cod to recover and secure a sustainable future for the stock."