Snowstorm update: What snowstorm. I’m not sure what you’re seeing where you are but here on LBI we’re into a rain event. We did get a few inches overnight but the changeover to rain has all but neutralized that. There is still talk of a switch back to white but I’m living in the moment – and (hate me if you must) loving the lack of more snow. Yes, that could qualify as famous last words but I’m feeling good that we won’t be getting in the once-predicted 18-inch range. The “Blizzard” warning flags are still flying. No, there are no “Blizzard” flags per se, just gale flags. However, those winds will have a lot of north to them meaning reduced beach erosion – though none of these sky attacks are helping Holgate survive another season. By the by, the refuge still claims Holgate is gaining ground. Whatever.

I was upset to hear of the sudden passing of Captain Phil Harris of “The Deadliest Catch” fame. Like many, I watch most every episode of that show, then delight in their product when I go for crab legs at the Chinese buffet. The captain hadn’t been looking all that good in the last episodes, especially during the time he was being tested for sicknesses. I guess the doctors missed something. 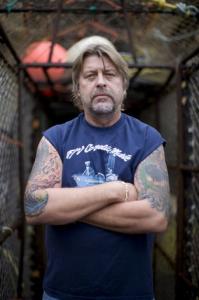 ANCHORAGE, Alaska, Phil Harris, the fishing boat captain whose adventures off the Alaska coast were captured on the cable television show 'Deadliest Catch', has died, the Discovery Channel said Tuesday night. He was 53.

Harris suffered what his family described as a massive stroke on Jan. 29 while the fishing vessel he captained, Cornelia Marie, was in port at St. Paul Island, Alaska. The fisherman was flown to Anchorage for surgery.

The reality show, which has filmed five seasons, has been one of the Discovery Channel's most popular and depicts the crab fishing industry in the dangerous waters off Alaska.

'It is with great sadness that we say goodbye to our dad - Captain Phil Harris. Dad has always been a fighter and continued to be until the end,' sons Josh and Jake Harris said in a statement released by the network. 'For us and the crew, he was someone who never backed down.'

In a statement, Discovery Channel senior vice president Elizabeth Hillman says, 'Phil was a devoted father and loyal friend to all who knew him.'

'We will miss his straightforward honesty, wicked sense of humor and enormous heart,' she said.

In an e-mail to The Associated Press, she said no additional information was immediately available Tuesday night.

Harris had seemed to be improving, and in a posting last Saturday on the ship's Web site, he was described as 'talking to friends and family today; showing his greatest progress' since the stroke.

His sons wrote in a Feb. 3 posting that 'No one ever said Captain Phil Harris wasn't tough. Today, dad showed some good signs of improvement, squeezing our hands and even summoning his trademark Captain's bluntness ... We are encouraged but still very cautious.'

According to the ship's Web site, Harris started working on fishing boats at age 7 and started work 10 years later on a crab boat. When Harris turned 21, he ran a fishing vessel out of Seattle, making him one of the youngest to captain a vessel in the Bering Sea.

When Harris suffered the stroke, the family said a friend, Derek Ray, had flown to St. Paul to take over the role of relief skipper for the rest of the opilio crab season.

Harris' fishing vessel was based in Seattle.

[Associated Press] By Clarke Canfield - February 9, 2010 - PORTLAND, Maine, The federal government advises throwing most unused or expired medications into the trash instead of down the drain, but they can end up in the water anyway, a study from Maine suggests.

Tiny amounts of discarded drugs have been found in water at three landfills in the state, confirming suspicions that pharmaceuticals thrown into household trash are ending up in water that drains through waste, according to a survey by the state's environmental agency that's one of only a handful to have looked at the presence of drugs in landfills.

That landfill water -- known as leachate -- eventually ends up in rivers. Most of Maine doesn't draw its drinking water from rivers where the leachate ends up, but in other states that do, water supplies that come from rivers could potentially be contaminated.

The results of the survey are being made known as lawmakers in Maine consider a bill, among the first of its kind in the nation, that would require drug manufacturers to develop and pay for a program to collect unused prescription and over-the-counter drugs from residents and dispose of them.

Scientists and environmentalists have long known of the common presence of minute concentrations of pharmaceuticals in drinking water, either through human excretion flushed into sewers or leftover medicine thrown down the drain. Research shows that pharmaceuticals sometimes harm fish and other aquatic species, and that human cells can fail to grow normally in the laboratory when exposed to trace concentrations of certain drugs.

The Maine Department of Environmental Protection found tiny amounts -- measured in parts per trillion -- of medications ranging from antidepressants and birth control pills to blood pressure and cholesterol prescriptions. The most prevalent drugs were over-the-counter pain relievers, including ibuprofen and acetaminophen.

'People need a way to properly dispose of their drugs, and they're not getting it right now,' said Mark Hyland, director of the state Department of Environmental Quality's Bureau of Remediation and Waste Management.

The bill is one of many 'take-back' programs under consideration in more than half a dozen states and would be the first of its kind if enacted; it has won committee support and awaits further action.

The bill is opposed by the Pharmaceutical Research and Manufacturers of America, a Washington-based organization that represents pharmaceutical and biotechnology companies and has partnered with other groups to pay for advertising against the proposal.

The lobby acknowledges that previous testing shows trace levels of pharmaceuticals can be found in water supplies and landfills, but says the levels are so small that they pose little risk.

'The amounts of pharmaceuticals (in the environment) are infinitesimally small,' said Marjorie Powell, senior assistant general counsel. 'We're talking about two drops in an Olympic-size swimming pool. Those two drops are much lower than any doses that would have an effect on humans.'

The state last October tested leachate at landfills in Augusta, Brunswick and Bath. Hyland ordered up the study after members of the pharmaceutical industry expressed skepticism about the presence of pharmaceuticals in landfill water.

Leachate at Maine landfills typically is piped or trucked to municipal wastewater treatment plants. Those plants are not equipped to remove drugs from the water before it is discharged into rivers and the ocean.

The pharmaceuticals found in the landfills don't pose a direct threat to drinking water, Hyland said. The landfills are lined to protect groundwater supplies, and in Maine there aren't any wastewater plants that treat leachate and discharge into rivers that ultimately supply drinking water.

But the leachate -- in high enough concentrations -- can pose a threat to fish and shellfish. Research suggests that hormonal drugs, such as birth control pills, tend to feminize fish. If the trend continues, Hyland said, there could be too few male fish to continue reproduction.

'What you find are greater concentrations of females downstream from where they've seen a dose of hormones, so you find a feminization of the fish population where there are fewer males around,' he said.

Hyland said he has questions about the effect on commercial seafood -- one of Maine's biggest industries -- in ocean waters downstream from the rivers, particularly bivalves such as clams or mussels, which filter water constantly and live near the shore.

'But obviously we need to know a lot more before we can draw a lot of conclusions,' Hyland said.

Although landfill leachate doesn't get into drinking water supplies in Maine, it probably does elsewhere, said Andy Tolman, a geologist with the Maine Center for Disease Control and Prevention. And some scientists urge caution about the dangers of drinking such water over several decades.

'Many larger states have big rivers that are used for both waste disposal and drinking water supplies, places like Ohio and Pennsylvania,' Tolman said. 'The same river gets used a number of times, and they're very concerned about treatment of sewage and leachate.'

Powell, from the pharmaceutical lobby, argued that people can properly dispose of their drugs in their household trash. In Maine, much of the trash is burned, she said, and pollution control experts agree that incinerating unwanted drugs is the safest solution.

She argued that if the bill does pass, it will only make drugs more expensive, she said.

Concerns have grown in recent years over pharmaceuticals reaching drinking water supplies. An Associated Press investigation in 2008 reported that the drinking water of at least 51 million Americans contains minute concentrations of a multitude of drugs.

It's commonly believed that the vast majority of drugs that get into water supplies come from human and animal excretion and that smaller amounts come from flushing them down the toilet or drain, a practice the Food and Drug Administration says is not recommended for most medications.

Federal guidelines recommend using community drug take-back programs to dispose of medications. If those aren't available, people should mix their unwanted drugs with cat litter or some other undesirable substance, put them into a sealed container and put it in the trash, according to the Office of National Drug Control Policy.

February 10, 2010 - RICHMOND, The House of Delegates yesterday passed a bill to extend the cap on menhaden fishing -- and keep control of the fish in legislative hands -- despite some heated opposition.

The bill, from Del. Albert Pollard, D-Lancaster, extends to 2014 an existing cap (109,020 metric tons) on the number of menhaden that can be taken from the Virginia part of the Chesapeake Bay.

Menhaden, a small, oily fish, is the only saltwater fish not regulated by the Virginia Marine Resources Commission. It's overseen instead by the General Assembly. Bills to move menhaden control to the VMRC have died this session.

'Fishing pressure now is far less than in previous years,' Pollard said. But the bill had its detractors. Del. Jackson Miller, R-Manassas, said it's wrong for the legislature to keep control over menhaden, when the VMRC oversees other marine fisheries. He also said there are more jobs at stake than just those at Omega. 'Which is better for Virginia, those few dozen jobs in the Northern Neck or those thousands of jobs all around Virginia?' Miller said. 'Vote against the industrial fishing factories. Vote for the health of the Chesapeake Bay. Vote for the traditional bay watermen, and vote for that oily little fish called menhaden.' Pollard said Miller was spreading misinformation about menhaden and accused him of trying to protect sport fishermen.

'The problem here is not one of resource, the problem is one of allocation,' Pollard said. 'He doesn't want people who live on the water to catch the fish; he wants his people who come down on the weekend to catch the fish.' The bill passed 77-22. A similar bill from Sen. Richard Stuart, R-Westmoreland, has already passed the Senate.

Comment by ronk654 on February 10, 2010 at 2:33pm
Holgate
Yeah, they told me about all the new acres down there but I think that before they went to work for us as civil employees, they sold swampland in Florida. I'd love to see them reexamine the old maps and include the, ahem, tidal areas. I'm pretty sure its still shrinking.
My issue with them remains, if your duty is to protect the endangered species, why are you allowing their habitat to disappear? You should be begging for sand to protect them.