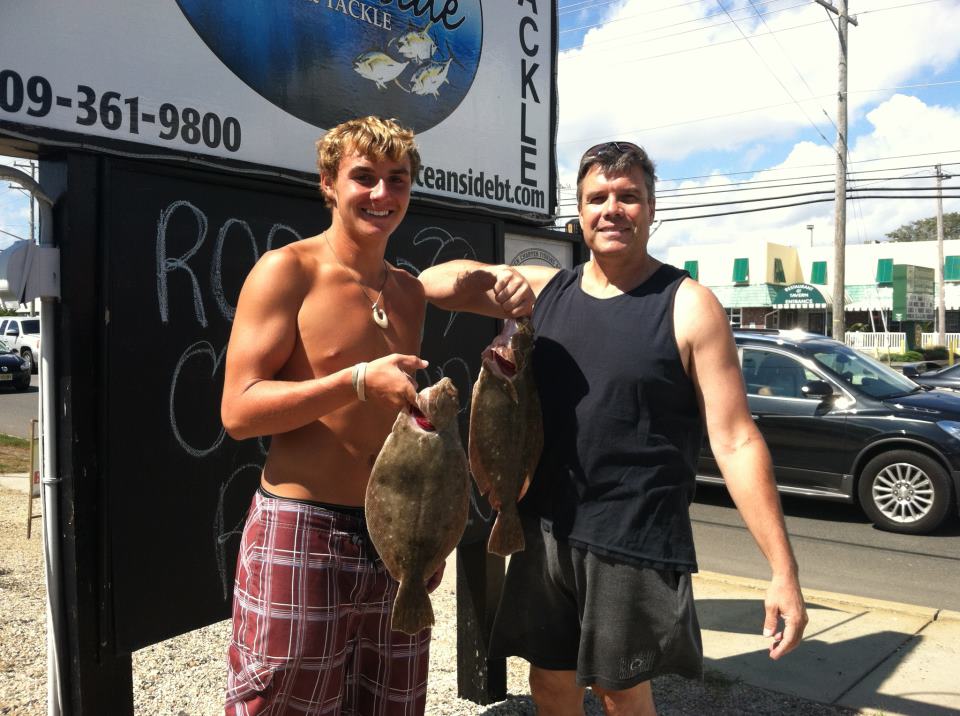 Wednesday, August 29, 2012: Pretty close to perfection. For those counting down the last days of school’s-out summer, days like this make it hard to think about being back home next week.

Well, positive thinking sure has held Isaac at bay – or at gulf, in this case. Early computer projection had the hurricanes remnants wetting us by this weekend, that near-stop slowdown of the storm means we won’t see related moisture until the middle of next week, if at all. Sadly, my plans to reunite with Holgate have been put off – way off.

Surfside fluking should now pick up again, slowed only by some wind problems.

Kingfish are knee deep off many beaches. Gary F., former BH local, is up from NC and is nailing kingfish by the bucketful, in the SB suds. Of course, he’s using pieces of fresh NC shrimp to attract them. That’d do the trick for me. Now where’s my scuba gear. “Damn, what the hell keeps stealing my bait. And what the hell are those bubbles out there?”

Email: Jay, I’m seeing many photos of sharks swimming in the waves right near shore. It this because of an increase in sharks or because they are coming closer in?

There is absolutely no doubt we’re seeing some signs of an overall increase in sharks, and, also, those sharks that survived the long post-“Jaws” extermination effort by humans are no longer being harassed. They’re more or less cautiously – and even casually -- coming nearer shore.

That extra “yes” refers to the immense increase in nearshore forage fish, especially bunker. I have folks telling me the bunker is now packed in as far as the eye can see – right off our beaches. And more than a few of shark fans have noted the number of sharks attacking the bunker baitballs.

As for the photos of sharks in close to the beach, that occasionally has a large chunk of sensationalism added in.

Firstly, I’ve seen real recent photos of sharks next to the beach that were obviously taken in far-off lands -- but are being marketed as local shots. That said, the picture of a hammerhead in knee-deep water off IBSP is real as rain, as are some photos of jumping shark no more than 100 yards off LBI beaches. Quite cool.

I’ll also offer a technical factor leading to the increase in captured shark moments. So many folks now have smartphones and high-def cameras close at hand that moments formerly relegated to mere word of mouth are now sightings captured in living color – and clarity. Works for me – and my blogs. Send ‘em in.

A SHIRT OF SUPPPORT: I’d like to take a minute to urge all to buy a T-shirt to support the effort to build a Fishermen’s Memorial in B.L. It’s essentially in memory of a longtime commercial fishing buddy of mine, Jimmy Mears, who died last January in a tragic capsizing of the scalloping and monkfishing vessel Mandy Ness.

The Coast Guard investigated the possibility that the Mandy Ness was swamped and capsized by a large commercial vessel passing nearby. Tracking down the only large vessel that had been near to the Mandy Ness, Coast Guard officials (using a chopper) boarded the vessel in question off Virginia but could conduct a thorough investigation, that led authorities to Houston, Texas, where the vessel docked, allowing investigators to look for any signs of a collision.

Unfortunately, a near miss – a passing close enough to capsize the commercial fishing boat – would not leave any telltale markings on either vessel.

Although the final report on what the USCG believes caused the capsizing of the Mandy Ness has been issued, it had not been openly released to the public.

Regardless of those findings, the loss of yet another fisherman – in this case one so well-liked by so many in our area -- has bumped the West Atlantic to the top of the deadliest list of fishing grounds, exceeding even the Pacific’s “Deadliest Catch” zone.

The memorializing effort for Jimmy, being carried on by family and friends, seeks to place a monument in the state park area of Barnegat Light. It has been given the green light by the state but the need to raise big money now rises.

Please check this out and help out: