Below, TODAY: The Lone Angler. This hearty walk-on soul doesn't care about a little little rain .. and wind ... and cold ... and beach overwash ... and tangled lines ... 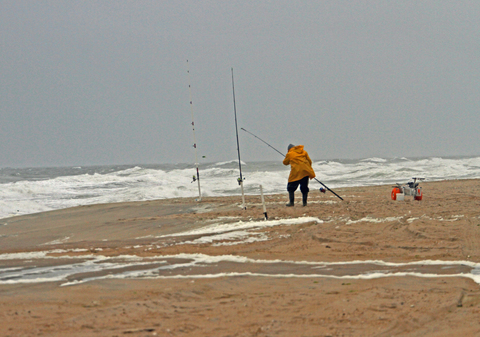 Tuesday, December 01, 2015: Oh, it’s nasty out there – even by fall fish-in-anything standards. Winds will go from NE to S tonight – and stay south tomorrow. That stint of south winds might spark a bass bite, per tradition. There will be residual wave action into Thursday and also significant rain runoff -- chilling and dirtying the bay.

The upside to our current crumby weather is how quickly we’ll transition into near-perfect fall fishing conditions for many days to come, i.e. starting Thursday. I’m talkin’ weather-wise.

I can’t account for what the fish might do, though I’m hyping superb schoolie stripering. I think the still-50-degree ocean could keep the small bass around through much of December. Here’s a small segment from my upcoming weekly blog, out in The SandPaper tomorrow.

SCHOOLIE RESHOW: Returning to bassing, the overall size of weigh-ins has dropped significantly, signally the move-in of so-called schoolie bass. These hectic eaters are a personal favorite. They fight more like blues, making fierce attacks on baits, jigs or plugs. The heavier gear used for bullish “cow” bass should give way to medium or even light gear when schoolies move in to play. The first half of December is usually the best time to get schoolies to keeper-size, with sub-keeper fish dominating through the remainder of the month. However, ocean warming might actually be playing into the early-winter schoolie bite, keeping bigger stripers in the mix right into the new year.

And, yes, there are self-serving folks -- like myself, on occasion -- who see climate change as occasionally offering a better climate for fishing and outdoorsing. In the end, though, warming seas and the accompany chemical changes in the ocean are more doomdayish than life-enhancing.

MANY THANKS: I’d like to sincerely thank those folks who contributed toward the continuation of this daily/regular blog.

I won’t get into details but keeping it up, running and fresh truly gets costly – both time- and expenses-wise.

Good looks run in the family ... going way back. 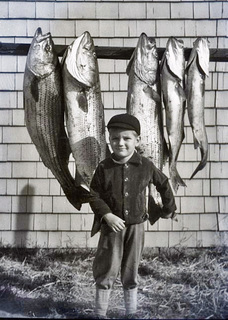 That said, I also fully appreciate folks who help out by keeping me updated on their fishing – along with reports of other outdoors stuff. I get many a cool column idea via folks frequenting this blog. I especially need outside input during the arriving ice months.

I’m damn near assuring there will be no hard water on Collins Cove for ice fishing – at least for the first half of the winter … and likely the entire winter. 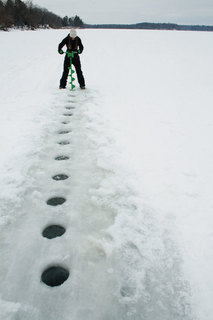 I still see some freaky warm weather events for all of winter, per El Nino influence. At the same time, we’ll be ever so close to massive snows, which don’t need bitter weather, just cold enough conditions to keep thing white, even during onshore winds. The ocean will play the snowstorm spoiler. Temps could stay so elevated, all winter, that any onshore flow from potentially blizzardy nor’easters will rapidly raise coastline air temps far above freezing. Here’s hoping you get a chance to bring the family to this weekend’s Ship Bottom Christmas Parade. It has a fishing theme. The weather should be parade-perfect. I’ll be up on the judging stand. Give me a wave. Horned Lark;they seem to show up each year at a parking at Hammonasset sp,they are used to people and easy to get close to photograph.

Over the last month, a series of abandoned fishing vessels have
washed ashore
along the Japanese coastline with scant evidence as to their origin and eerily containing the corpses of the sailors who once helmed the fleet.


The mystery began early in November when four ghost ships ran aground on the Japanese coast and were followed by an additional seven ships that were discovered throughout the month.


As Japanese officials have begun recovering the ships, reports have emerged of unsettling "skeleton-like" corpses being found on board with the total number of bodies reaching twenty so far.


An investigation into the wave of ghost ships has yielded only a scrap of fabric believed to be from a North Korean flag and a sole hand-painted sign which says "Korean People's Army."


These tantalizing clues as well as the rudimentary nature of the boats have led to speculation that the ghost ships came from a North Korean fishing fleet gone awry.


Others have theorized that the ships may have deliberately strayed off course in an attempt to flee the oppressive North Korean government, but were ill-equipped to find their way to freedom because the ships lacked any GPS equipment.


Since the state of the bodies suggest that the ships have been adrift for quite some time, determining exactly how and why they became abandoned will likely remain a mystery unless a fortunate survivor can be found.