Tuesday, September 27, 2016: I thought the weather would be all over the board and sure enough …

How to get forever banned from the Bill Dance Show ...

HOLGATE SANDS: There is nothing overly new from ACE regarding Holgate. Reporter Juliet KH writes, “No definitive timeframe for a decision, but still looking at the possibility of placing additional sand in Holgate. But no guarantees they'll be able to as there are environmental, physical and contractual issues to work through.”

Similar to the last replen there, extra paperwork is coming into play. It might have to do with the refuge but I don’t know that for a fact. More telling may be that “contractual” angle. I’m guessing that Great lakes might actually want to get the hell outta here before winter. They know what it can be like here.

Ship Bottom is next. That beach fill – no dune work – could interfere a bit with surf fishing in October but we’ve seen that Great Lakes is almost remarkably agreeable to the public using the beach right up to where they’re pumping sand. Quite cool of them.

Tuesday, September 27, 2016: I thought the weather would be all over the board and sure enough … it was a bigger board than I thought. There were some honking winds last night and today is down to a merest of breezes out of the south.

This null wind period will be gone in a huge way by Thursday. We have a borderline worrisome batch of direct onshore winds arriving for the end of the week, pushing 40 mph. It is a double-barrel influence of lows, north and south.

What I don’t like is the possible duration of these east winds, lasting up to five high tides. We’re also in a somewhat problematic new moon phase. I’ve noticed this moon phase has been giving us high tide headaches this entire year. There have been many years when new moons are meaningless -- in the road-flooding scheme of things. 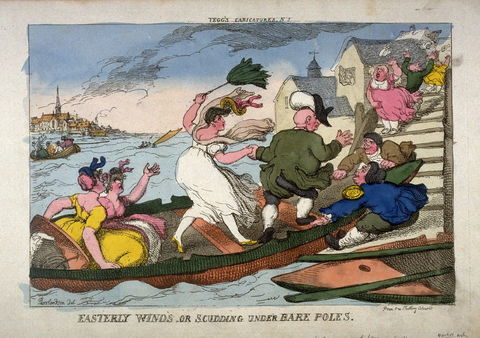 I’m not harping on rain and such. It is coming but precip is not a huge factor for serious fall fishing. It rains, we climb into our chestwaders and waterproof jackets.

Complexities of arriving stormage: There is a possibility that the onshore flow might not as hard as forecasted, should the northern low sinks slightly further south, holding the far more powerful southern low down to our south. That would mean mere SCA conditions. If the expected storm route holds true, we’ll be vying with gales, now being warned. A highly unlikely scenario of an enhanced southern low (blowing up just off the coast) could evoke full gale (storm) warnings, with winds over 50 mph. This will be yet another erosional test for the Dead Forest area in Holgate, two-thirds of the way to the Rip. That far down Holgate there is absolutely no erosion relief from the replen sand. It could get ugly if all the sand-covered former vegetation gets uncovered, as it did last winter. My chain saw has gone kaput so I won’t be blazing any openings.

None of this bodes well for those of us who wanted to get our fishing in prior to this weekend. It’s gonna be a wind-in-face mess on the frontbeach. Then comes the Chowderfest weekend, this Saturday and Sunday, when winds will obediently calm rapidly. The sun-warmed chowda will flow like wine … served in tiny thumb-sized plastic cups. It will bring with it the last touristy traffic jams of the year. Drive nice, especially if driving through an over-bustling Beach Haven, heading for Holgate. 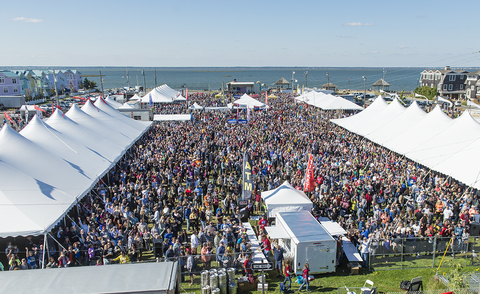 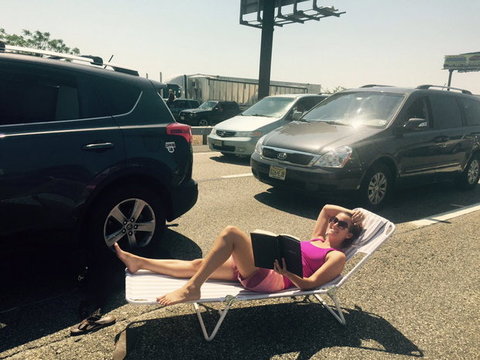 Most LBI traffic signals will go on the blink next week. The speed will increase slightly. Nonetheless, it’s still doubly advisable to drive the straight and narrow. I don’t know if it’s just me but I’ve never seen so many folks getting pulled over in LBT. Yes, it very well might be the new license plate scanning system at play.

NOTE: You’ve likely noticed that LBTPD cruisers are now inclined to lie in wait on east/west side streets, where they can get a speed check and a real good look inside vehicles before you know they’re even sitting there.

Hey, I don’t mind safer roads. At the same time, I’m not sure what I think of cops pulling me over to tell me my license plates indicate I’m, say, behind in my property taxes. The company selling the scanners offers that as a usage. If you’re a deadbeat dad, you’re a dead duck driving.

Guys, here's a cool gift for the organic lady in your life ... Gals, in return, here's a cool gift for the organic angler in your life ... 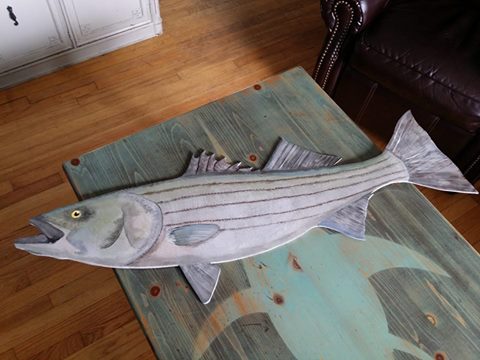 True work of plug/lure fish catching ability art arrived yesterday. I've been watching the build all season and stoked to get one. The details are over the top. Outstanding work Merv Rubiano 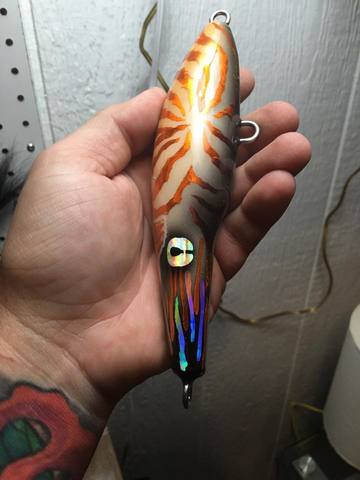 Below: This news is actually a good sign for future NJ striped bass fishing.


HOLLYWOOD, Md.—
Both watermen and state fisheries officials are encouraged with the improved catches in both hard crabs and oysters in recent seasons; both remain cautiously optimistic that the harvest improvements mean that the Chesapeake Bay watershed's health is starting to turn around.


Tommy Zinn, president of the Calvert County Watermen's Association, said that crabs have not returned to the glory days of decades ago but the recent harvests have improved markedly.


"Some areas did real well, some not as good," Zinn told The County Times. "But on average there were more crabs available than in prior years.


"In the short term at least it's getting back to average or above average."


Zinn was also encouraged by the improved oyster harvests in past several seasons, which in recent years had given watermen an option to continue working on the water when crabs were scarce.


"Oysters are getting back to the historical level of the 1980s when guys could make a living," Zinn said. "They're doing better than when times were really slow."


The resurgence in crabs and oysters coincides, state officials say, with an increase in submerged aquatic vegetation (SAV) and improved dissolved oxygen levels.


"It seems like all of the investments we've made into the bay restoration efforts are paying dividends," said Stephen Schatz, spokesman for the state Department of Natural Resources.


The bay grasses are crucial for providing habitat for all kinds of aquatic life; they also help improve oxygen in the water.


The state has not compiled catch numbers for the crab harvest this year but their winter dredge survey taken back in the winter showed a sharp increase in the number of juvenile crabs available.


State officials said that improvements in the crab population were across all age groups of the species; the spawning-age female stock nearly doubled rom 101 millon last year to 194 million this year.


The male stock of crabs more than doubled, according to the survey, from 44 million to 91 million.


This is the second highest level of the male portion of the species since 1995, DNR officials stated.


Dave Blazer, head of DNR Fisheries, said that last year's oyster harvest was down slightly from 2014 to 2015 season but was still strong at 350,000 bushels harvested.


He said that management of crabs, especially restrictions on the harvesting of females dating back to 2008, had a hand in catch improvements.


But there were plenty of factors that they could not control.


"Mother Nature, there are a lot of factors that have helped out," Blazer said. "That's all beneficial to the crab resource.

Most Tuna Catch Comes from Abundant Stocks, But Overfishing of Some Stocks Continues

Washington, DC – The global commercial catch of tuna reached 5 million tons in 2014, an increase from 4.6 million in 2013, according to the ISSF Tuna Stock Status Update – 2016 (Status of the World Fisheries for Tuna) report just published by the International Seafood Sustainability Foundation (ISSF). Tuna accounts for about 6% of the world’s 81.5m ton marine catch.

The report, which is updated as recently as this month for species that have current landings or survey data available, lists the make up of the world’s tuna catch and measures each of the world's stocks against three management metrics: abundance, mortality, and bycatch.

From a perspective of tuna stocks, 44% of tuna stocks globally are at a healthy level of abundance, and 39% are overfished. Eastern Pacific Ocean (EPO) bigeye tuna ontinues to be slightly overfished and was downgraded from a Green (healthy abundance) rating to a Yellow (intermediate) rating since February. Other overfished stocks were Western Pacific Ocean (WPO) bigeye, Atlantic Ocean (AO) bigeye, and Indian Ocean (IO) yellowfin.

“While 77% of the world’s tuna catch comes from healthy stocks, it is important to remember that there are four stocks — representing 13% of the catch — that are being overfished,” explains Dr. Victor Restrepo, ISSF Vice President, Science. “Even though there are management measures in place for them, these measures are proving to be insufficient to end overfishing — and a greater effort is required.”

The ISSF report compiles the most recent scientific evaluations from five tuna Regional Fisheries Management Organizations (RFMOs) into one comprehensive resource, organized by ocean and tuna species. It assesses the status and management of 23 tuna stocks using a consistent methodology that considers Abundance, Exploitation/Management (fishing mortality) and Environmental Impact (bycatch).

The report also includes an appendix on bycatch showing the species impacted by gear type using the same color-coded system and a summary of the major mitigation and monitoring measures adopted by the various tuna RFMOs. 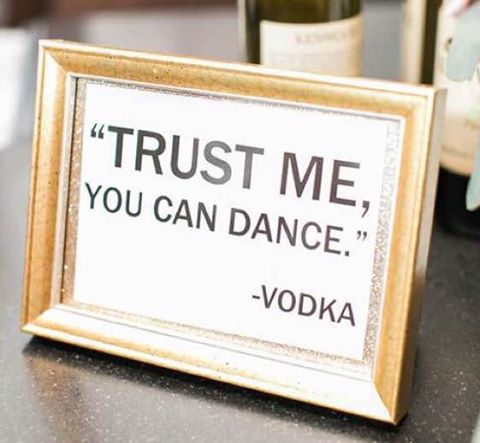 It isn't just you. The coffers need filling and we are the baitfish.