Tuesday, September 06, 2016: Hermine has to be my all-time favorite tropical system ... Holgate to reopen to buggies 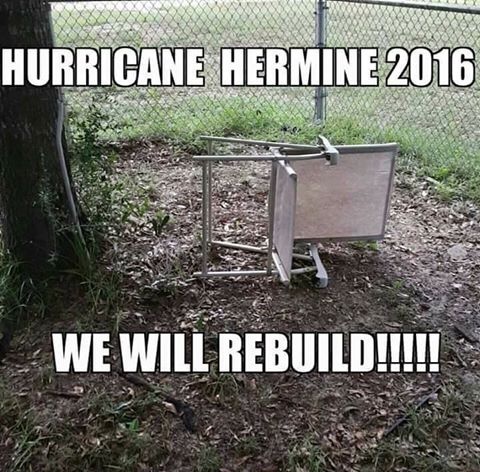 Blonds can always piss off other blonds.

Tuesday, September 06, 2016: Hermine has to be my all-time favorite tropical system. Not only did she do virtually no damage but just today she heard I was hoping for some much-needed rain and … voila. A warm rain, to boot. She’s a sweetheart.

A quick note to buggyists: Holgate refuge zone beaches will reopen to vehicles first thing Thursday morning. It has remained open to hikers all along.

Yesterday, I walked down Holgate maybe a mile.5 and not only was there virtually no signs of ocean-to-bay overwash but I took notice that many areas that had been denuded of vegetation last winter – twixt bay and ocean – have begun to revegetate, mainly via grasses. There are still some desert-like stretches but I think even those will feel the roots beneath their grains, very soon.

Obviously, the rapid arrival of replen sand, being currented southward, will lessen the likelihood of water exchanges, east to west. Give those grasses half a chance and they’ll have once sandy wastelands looking like fields of grain -- in just a couple years, as we’ve seen on the west side of Holgate. I’m hoping we can manually add some sturdier shrubberies, The refuge has to OK such plantings.

I guess I should note that just because the grasses will take over with a passion, there will still be acres and acres of open sand for the next rush of plovers and other such ground-nesters. That open sand will be more oceanside, as replen material begins stacking/building eastward. The east side of the refuge is the side plover covet. I see Holgate remaining the prime plover nesting site for the entire Eastern Seaboard plover -- for many blue moons to come. You’ll see below that the weakie showing remains good to exceptional. I’m wondering if we’ll finally see weakfish near the inlets, mainly after dark. Not that many years back, dark-time fall weakie fishing was exceptional around Andy’s, before the public fishing walkway was built. Now, with the larger fishing zone, there might be tons of places to first net live mullet then drop them in for sparklers. 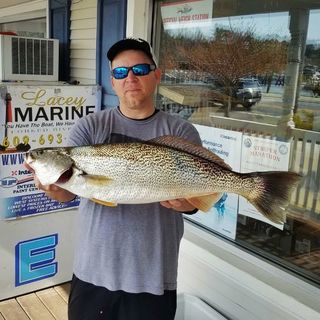 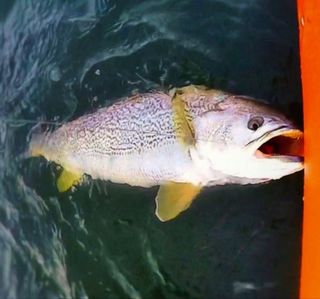 On the Holgate end, the mullet run used to mean daily, dusk, live-lining of mullet for weakies, though I never needed anything more than a jighead with pink plastics to get some salutes. There can even be a fine daytime weakfish bite at the wide-water bend in the back cut, though it’s not as easy getting back there now, with the above-mentioned grasses having taken over. And it’s a sloppified mess taking the bank route to the bend. Still, I’m sure we’ll be making that muddy-ass walk.

Fluke season 2016 is winding down. And congrats to the so-many anglers who caught the largest flatties of their careers. They were almost all boat-caught. Still, I fear fluke regs could get even stricter for 2017. While that might seem bogus, I should remind folks that the increased size limit for this year really didn’t have a ruinous effect in the ice, as folks had no trouble coolering copious catches. Of course, that’s just my early stumping for a longer season – even if it costs an increased half-inch. I can’t count the number of folks who culled out keeper fluke, as larger ones came aboard. More importantly, the total poundage that hit the hold-until-winter freezers proved it’s not the number, it’s the size.

Ocean water temps are slightly high to about normal. Though Hermine lowered sea temps over a large parcel of the northwestern Atlantic, we have a stretch of sultry air arriving that will jack up those lowered ocean surface temps. This points to a late start to fall fishing. So what else is new over the past decade? 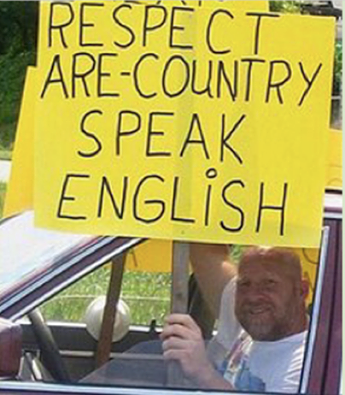 I wanted to see how the water was after the recent touch of TS Hermine, so spent some quality time with my wife Jennifer and 8yr old son Luke for a quick bay Blowfish trip before the start of the school year. We double anchored and had fish almost immediately with both small Sea Bass and Blowfish hitting our baits. We probably landed over 40 Sea Bass and about 24 Blowfish, keeping 14 for the table. There was plenty action for our quick 2 hour trip, and we finished catching a few Blue Claws for dinner. Great way to end Summer! 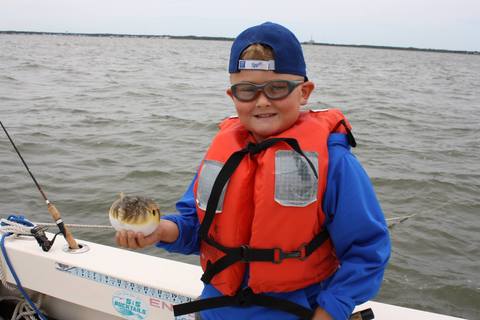 Thankfully, Hermine was a lot more timid than was forecasted. We fished right though Saturday and blasted the weakfish Thurs, Fri, and Sat. Chumming with live grass shrimp on the east side of Barnegat Bay was the best for quantity and lures tipped with shedder crab on the west side of the bay, behind Waretown, gave up some of our biggest fish. Here I am on one of six fish between 18 and 21 inches we had along with Brian Ewan of Barnegat and Matt Pacione of Waretown on Thursday afternoon:

Either tide is producing, as long as it's moving. Anything from 12 to 21 inch fish, but mostly 12 to 15 inch fish. There are fluke in the mix, though it is rare to catch a keeper, most of the flatties are 14 to 17 inches. Snapper blues, sand sharks, juvenile sea bass, blowfish, hickory shad, silver perch and more species visit our shrimp slick every day. We are using six pound spinning outfits so whatever you hook is going to take you for a ride.

Sunday and Monday, Sept 11 and 12 we will be running to Barnegat Ridge for albacore and bonita or shrimping for weakfish....or both! Whatever you want to do. Two trips a day on Sun and Mon.

Pics:  IMG 80: Dave DeGennaro of the charter boat Hi Flier with a weakfish caught Thursday afternoon on a jig tipped with shedder crab.

Shorebird of the Year 2016: Piping Plover

The ‘Shorebird of the Year’ poll has never been so exciting than this year. Hooded Plover has been leading for months but voters made a difference in the last 10 days and pushed Piping Plover (Charadrius melodus) to the top of the list by over 100 votes. Piping Plover has now joined to a precious group of shorebirds, including Red Knot, the 2015 and Spoon-billed Sandpiper, the 2014 ‘Shorebird of the Year’. 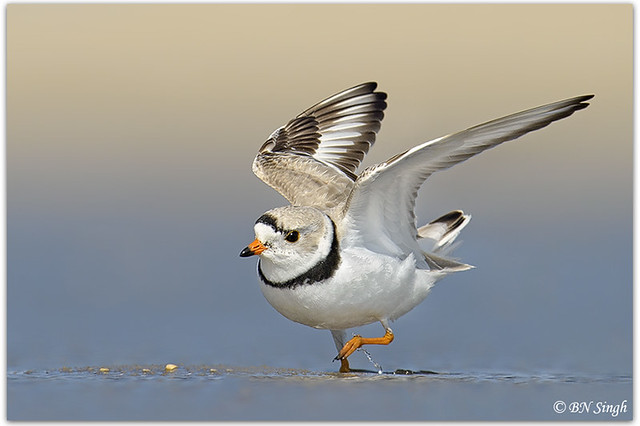 Piping Plover is a charismatic shorebird of the North American shores. Image legally embedded from B. N. Singh Flickr portfolio.

Piping Plover is a globally threatened shorebird which both breeding and wintering range is restricted to North America. After serious population decline in the 19th century, it slowly recovered in the 20th century. In the last few decades it all went wrong again as a result of extreme pressure of coastal development and other anthropogenic effects. Piping Plover chicks survival rate is still very low due to human disturbance and predation.

World Shorebirds Day will celebrate Piping Plover throughout the year with a little bit different approach than it was for earlier ‘SOTY’. A dedicated page will be published FOR postING updates, interviews and other interesting stuff.

Now it is your turn to share your experiences and stories with Piping Plovers. Should it be a story of observation, a Piping Plover artwork or beautiful photos, please send us to shorebirdsday@gmail.com. 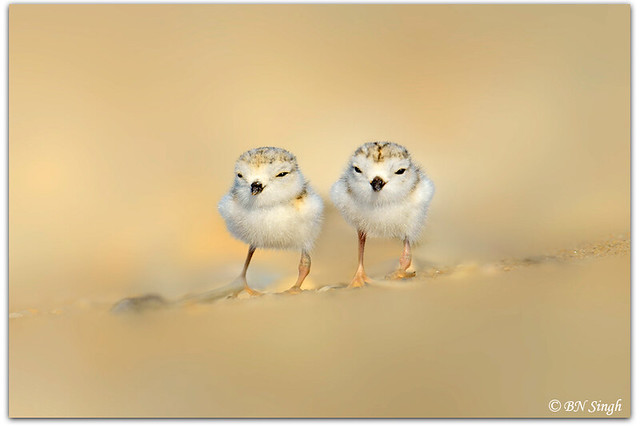 Is there any sweeter thing than a fluffy Piping Plover chick? Image legally embedded from B. N. Singh Flickr portfolio.

Below: This is a down-south thing but I know a lot of OBX readers are in here -- and it also relates to us in many ways. As to the sanding over some of the most famed surfing locales in the nation, I sympathize with waveriders but note -- as I've done all along -- that the breaks will return, even more so in NC, where groins/jetties are few and far between.

The Bureau of Ocean Energy Management (BOEM) has signed an agreement with Dare County, North Carolina, to provide up to 4.825 million cubic yards of sand from federal waters as part of a shoreline management project for the towns of Duck, Kitty Hawk, and Kill Devil Hills. The shore protection project, using sand from the seafloor of the federal Outer Continental Shelf (OCS), will renourish approximately 8 miles of beach, which is more than half of the 15 miles of oceanfront shoreline adjacent to the three towns. Dredging is expected to begin in the spring of 2017.

Nourishing the beach will meet several shore protection goals. The project will help protect vulnerable public infrastructure, including N.C. Highway 12 and U.S. Highway 158, which are critical evacuation routes. Additionally, it will reduce flooding of roads and homes behind the shoreface, which will help first-responders react during emergency situations. Finally, the project will protect public and private development, including the beaches that are vital to the local economy.

A picture from the Duck Environmental Assessment shows the number and species of sea turtle nests recorded from Oregon Inlet to the North Carolina/Virginia border in 2012. Caretta caretta (Loggerhead turtles) and the Lepidochelys kempii (Kemp’s ridley) are just two of the sea turtle species that inhabit this region. BOEM works with the USACE, the contractor and the local community to minimize and avoid impacts to sea turtles during the dredging and beach construction activities.

“Dare County is pleased to collaborate with the Bureau of Ocean Energy Management and the towns of Duck, Kitty Hawk and Kill Devil Hills to bring this much needed nourishment project to fruition,” said Dare County Manager Bobby Outten. “This nourishment project will provide substantial storm protection for our coastal communities and ensure robust shorelines are available for our residents and visitors to enjoy for many years to come.”

BOEM has the authority to convey OCS sand resources for shore protection, beach or wetland restoration projects undertaken by a federal, state or local government. In exercising this authority, BOEM may issue a negotiated non-competitive lease for the use of OCS sand to a qualifying entity.

BOEM has invested more than $40 million over the past 20 years to identify non-energy resources on the OCS, conduct world-class scientific research, and lease OCS resources to coastal communities and other Federal agencies in need. Information from environmental research and resource identification has informed environmental assessment and leasing decisions concerning the use of OCS sand resources in beach nourishment and coastal restoration.