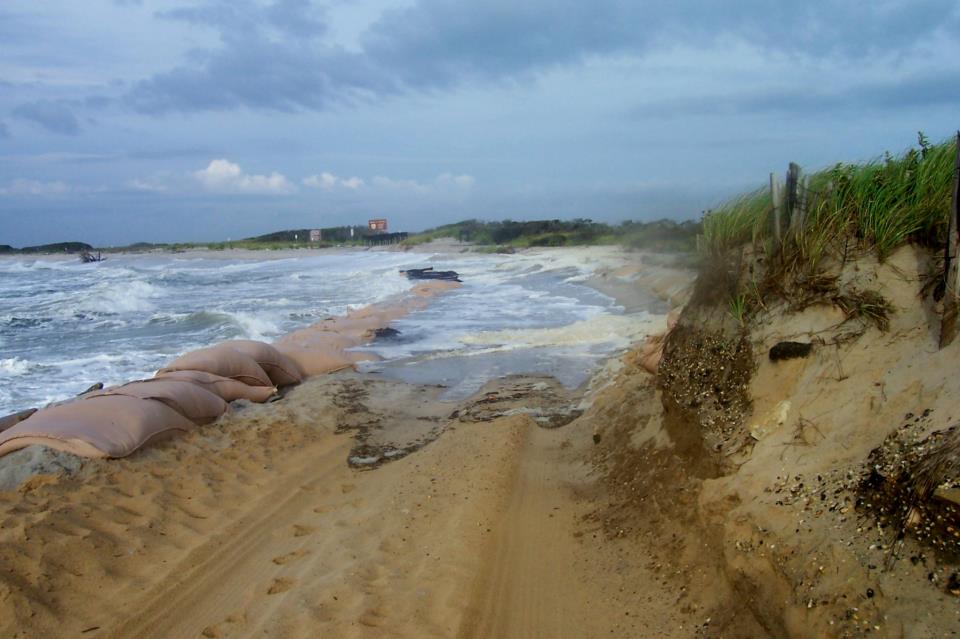 Above: Ramp overwash. The damage will be known as the tide drops. Another high tide to go. Via Jingle Bait and Tackle. Tuesday, September 18, 2012: I’m just finishing my weekly blog – and getting ready to work until past midnight here at work, production day.

I hit the beach here in Surf City and the 30 mph wind has taken the replenished sand beach and formed corduroy patterns; a series of east-west sand dunes a few feet high. Man, are those bumps going to be a bitch when buggying over them after this blow.

A far larger headache is the hit to the Holgate entrance.

This a.m. there was surf breaking atop the Ramp’s new sandbag runway. You would need an airboat to get on.

As tides drop, it seems the sandbags held their place pretty well. LBT Public Works will surely be out there patching up their creation.

For real-time Holgate updates, check with tackle shops or in here.

The winds are making up for the past two weeks, when we had all that odd calmness. Since I’m already seeing 30 mph gusts, I’m guessing the warning about 50 mph, as the front approaches, are warranted. That’s heavily problematic for boat owners who still have their vessels in the water but, after last weekend’s summerishness, didn’t tie-up for near tropical storm winds. Fortunately, most marinas are still fully staffed. As for you street-end, cinderblock anchorers …

No, that wasn’t a rigged photo of Dante S’s doormat fluke. It reached double digits. That boy can fish. 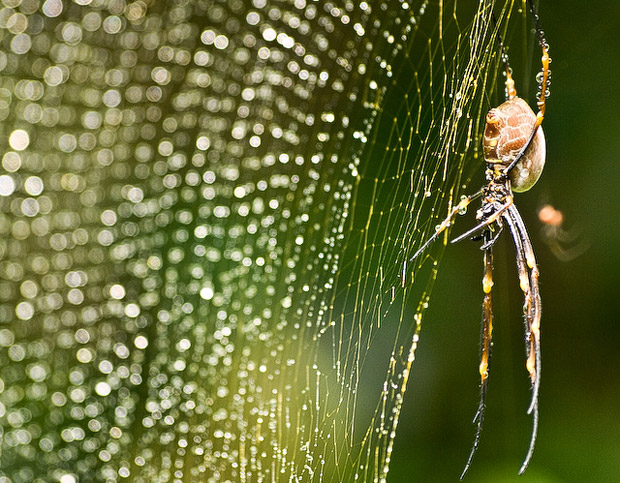 SHOW SOME SPIDER RESPECT: As if this summer hasn’t already shown us some huge hatches of insects, good and bad, we’re seeing an amazing showing of orb-weaver spiders, along with the related garden spiders.

I’ve never seen so many.

These spiders are most easily recognized by the huge, scream-worthy webs they weave.

Accidentally walking face-first into one of those webs – some over three-feet across -- can send even a hardened arachnologist into a girly, run/scream fit. “Get it off! Get it off!”

Spook factor aside, orb-weaving and garden spiders are the kings of the insect-nabbing web realm. They’ve been dubbed “the dominant predators of aerial insects in many ecosystems.”

Note that well. They’re on our anti-insect side. And, no, they are not insects themselves. That’s grade school science stuff.

A strand cooler is the fact that orb-weavers build a new web every single evening. To begin, it jumps aboard a wind current and glides forth, shooting out silk until landing on a nearby object. It then strands its way down to the  ground, climbs back to the starting point to create a “Y” shaped foundation to build (and build, and build) upon.

If you’re kinda science, you should see the way an orb spider hunkers down to some serious silk crafting toward its web’s center. Thereabouts, it creates  a stabilimentium: a complex, geometrical crisscrossing of silk. That’s for strength, so it can snag even power fliers, like beetle and wasps. It has taken over 90 million years in perfecting this design.

After a hard night of sucking body juices from snagged insects, the orb spider takes the day off. Toward evening, it returns to the web -- and eats it. I’m serious as silk. Whether it does this like an Italian sucking down an insanely long strand of spaghetti …

Anyway, these spiders are big and surely spooky but they’re just not mean or dangerous. The main human injuries from orb and garden spiders are during the above-noted panic romps after folks stroll face-first into a big web. YouTube shows folks falling off steps and porches -- or blindly running headfirst into hard objects, including the heads of others.

Personally, I have taken a liking to many an orb spider. I especially enjoy admiring them as they harmlessly crawl from one person’s back to another’s.

J, do you realize what a break through into the bay @ Holgate would do? I fear it may happen soon. It will change the entire make-up of that area. All the way across to the sheapheads.  Any thoughts. Please post possibilities.

You're right in thinking that way -- as I am, also. But, there is a growing boating segment that actually wants to see that happen, in unsubstantiated hopes a dissection of Holgate will somehow cure the channel shallowing crisis on the bayside of Holgate. In essence, some boaters want a new channel, right there near the parking lot if possible. Save them some time and fuel getting out to sea.

Their thinking is beyond pie in the sky.

An east-west dissection of Holgate will, indeed, create a channel of sorts but who says it'll be navigable?

Yes, in the distant past, a channel thereabouts did become large enough to navigate, shortly after it broke through. Now, though, there are new bulkheads and man-made formations (groins and such) to thwart any prolonged inlet openings from staying put. As an inlet, it'll be about as reliable as a long-range weather forecast.

I can assure that all a Holgate break-through will do is create massive sand blockages across the already shallow channels in the bay, as thousands of square-yards of sand wash in. What do those boaters think, the arriving sand will go just where they want it to?

What's more, in the past, Holgate’s sudden inlets have rapidly migrated southward. Even if a new inlet were to form, it would move south within only a few years. What kinda fix is that?

The breaking of Holgate would be all bad, excepts maybe for the refuge, which might see it as a chance to separate the Wilderness Area from humans. However, there's a solid likelihood that a dissection would lead to further erosion of the remaining sequestered south end. If nothing else, a new inlet will surely cause a swath of utter habitat destruction, north to south, through the refuge, as the inlet moves southward. I’m guessing that would be an ecologically ungood thing by all wilderness area standards.

What’s more, a dissection near the parking area and a subsequent buildup of sand there -- as an inlet moves southward -- would eventually render the original Holgate Wilderness area lost though attrition. I sure don’t want that but I’ll bet some scummy land developers wouldn’t mind a shot at the newly formed real estate.

Ironically, the surest way for the Holgate Wilderness Area to retain its ecological worth -- and actually gain in size -- is the massive sand replenishment of the beach. As plant life expands outward onto newly deposited sands, wildlife will gets a blast of new habitat.