Tuesday, October 30, 2018: The ocean is finally laying down, though it did so slow as salty molasses -- conditions now excellent

Hating on the name Earl ...

Note: This much-photographed vessel in North Beach was intentionally grounded yesterday by the three-person crew after it began taking on water ... too quickly to be baled. It is out of Louisiana  and was bound for the Caribbean, via New York, where the captain has spent the summer. Writer Gina Scala is researching things for a SandPaper story for either later today (thesandpaper.villagesoup.com) or in hard copy out tomorrow.

I do know the three able bodies on-board consisted of two retired air force personnel and one retired Navy officer, i.e. they knew what they were doing when they chose to negotiate through a fairly powerful three- to five-foot groundswell that was breaking hard on the sand bars. It was tactfully done – to then await TowBoatUS for a high-tide pull off and trip to repair work. It was successfully pulled off today. It's headed for Forked River.

Aground in North Beach

(Would the person who told me about a friend who got a fish-measuring ruler tattooed on his leg please contact me at jmann99@hotmail.com. Thanx.)

Tuesday, October 30, 2018: The ocean is finally laying down, though it did so slow as salty molasses. There is moderate surfcasting being done along the stretch of mid-Island I drive to reach work. By the by, much thanks to the public works folks in Ship Bottom for smoothing out the buggy entrances/exits, which had been duned over by blowing sands. Overall, the beaches fared well due to the quick passage of the storm (see below).

Note: The entrance/exit at the North Beach tennis courts is tricky. The beach is narrow and quickly gets chewed up after buggies pass through.

The ocean is perfect for surfcasting, with just enough roughness to maybe get some bass in close. The browness has also given way to a clean greeness. I hope to fish heavily for the rest of the week, after getting The SandPaper out by midnight tonight.

While I'll be plugging, I might also throw out some bunker or clam chunks. In fact, I was given one of those chrome "fluke" balls; a two-ouncer (sadly, from Walmart). I've heard them called Tsunami balls. I'll bet they would work on bass. It looks easy to switch-out hooks, maybe replacing the existing ones with a killer circle hooks. I've already tied some bucktail on a couple circles. 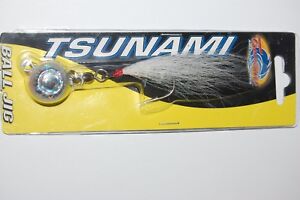 Yes, it has to be calmish ocean day to surfcast one of these baited balls but I'm already big on holding a chunking rod so I won't mind steadily taking up slack in a slow-retrieve way. I've always thought it's better to have bait moving about a bit, mainly with bass. To make things really different, I frozen some whole squid freshly jigged up this past summer. I might put a whole one on and fish more like they do up New England way.

HOLGATE HAPPENINGS: Holgate refuge beach area has been smoothed over by wave action, making it an easier drive … for now. With this dry, somewhat mild air mass moving in, the migrating replen sands will fluff up again, leading to easy sinkage.

Speaking of the far south end, a couple washover areas are now little more than desolate sand expanse, twixt ocean and bay – and not that much above sea level, berm-wise. Any and all higher tides this fall and winter will overwash. A large storm will dissect the Island.

The far south point at the Rip gained a solid 100 feet of sand-land. In fact, that’s likely the largest gain in Island length as I’ve ever seen from one storm session.

Here’s a somewhat eerie look from one washover area -- with a west wind downpour over the ocean:http://www.youtube.com/watch?v=bWbdg-CHFIs 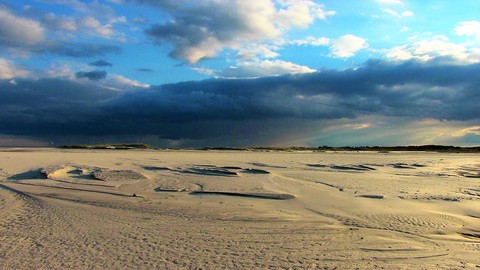 There are four bass weighed into the 2018 Long Beach Island Surf Fishing Classic. That’s after Day 25! Eeks. That’s pretty slow. Also, the largest fish is just over nine pounds. Eeks, again. That kinda small. However, on my own advice, it’s not about size but about winningness. Those four humble fish have fine prize money and sweet gifts written all over them.

For those yet to enter the classic Classic, the event is ready to heat up at the drop of a hat – a free hat just for entering. A lone big bluefish could be worth over $1,000.

As to the bass, they’re so close I can taste them. Tasting is just what I have in mind since I’ll get to keep a smaller fine-eating striper of between 24 inches and 28 inches, via my NJ Striped Bass Bonus Program permit. You can no longer sign up this year’s program. By the by, I got angry word about a South Jetty angler keeping a 25-incher, claiming anyone can now just keep one. I’m guessing that was a highly convenient, non-innocent misinterpretation on his part. Oh, well. I’m not the bass police.

Few from this evening

SPEED SAVES THE DAY: What a day a difference makes. ‘T was a time, childrens, when nor’easters almost always blew for three days straight. It was a tradition the sky had long held to in these parts. But, the skies and times they are a changin’. Face it, coastal storms have sped up. And the difference makes the day. I’ll explain.

The honking, half-day 45-mph fast’easter we had last week was plenty enough to cause some of the worst flooding certain sections of LBI have seen since you-know-who. However, that ersatz nor’easter was here and gone before the backed-up sewers even knew what hit them. It was a single high-tide flood event. In its rapid passing, it proved how sped up storms can stave off horrible flooding.

While virtually all the media dubbed the storm a nor’easter, it totally lacked the tried and true components of a proper nor’easter. It especially lacked a blocking high-pressure system over the Canadian maritime, famed for bringing a grinding multi-day halt to a northbound storm. In this case, a mere day of stormage was plenty enough to bring a number of Boulevard and bayfront buildings to within an inch of a serious-grade inflow of bay water.

It doesn’t take an Island scientist to recognize the coulda/woulda been angle. Had that storm gone the true nor’easter route, hanging in place through a three-day series of full tidal cycles, leading to catastrophic tide stacking? We could have been neck-deep in headaches. Sufficed to say, a good old nor’easter in this day and age could be a coastal wrecking ball.

Now, a quick pondering of the whyness behind the seeming speeding up of coastal storms. This is where sheer conjecture gives way to utter guesswork, which is where I become highly qualified to chime in. I’ll guessingly assure that the surface warming of Earth’s oceans, particularly in the North Atlantic, can literally suck storms rapidly out to sea. How so? They are drawn eastward by the energy magnetism arising from increasing oceanic mildness. It’s distantly akin to how a tropical cyclone follows its energizing nose, often while bulking up. By the by, this sudden theory of mine would have more and more North American storms sucking energy across the Atlantic and all the way over to Europe. Lo and check it out, this has begun to happen more often.

A tad more technical, an enhanced west-to-east Coriolis effect in the northern hemisphere also plays into steering a storm eastward.

What’s any of this guessing mean? Firstly, we might want to think about putting an abrupt stop to the unnatural heating of the ocean surfaces through flagrant abuses of the atmosphere. Until that end of sky-abuse day comes, it comes down to not knowing squat about what might happen next.

While many of us take pot shots at what near-future skies might do, I’ll duly default back to stark reality – with maybe a touch of fear tactics – by saying we have moved into uncharted planetary territory, weather-wise. And it’s our own doing. All that planetarily happens here-to-fore is unprecedented, unless we daringly flash back to the worst extinction ever known: the Permian–Triassic extinction, which killed over 90% of living creatures some 250 million years ago. Emerging science, tapping fossil evidence from that extinction, strongly indicates, the overall culprit was, and I’m quoting, “a runaway greenhouse effect.”

Oh, I know researchers are talking about a geological event that took a million years to play out -- and was thousands of times more severe than we’re moving toward. Still, it surely goes to show we’re playing with end times when taunting our planet’s delicate balance.

With the amount of bait along our beaches this fall has the potential for being as good as it gets.  Already the numbers of bonito along the beaches is like I have never experienced before. A friend of mine with two other boated over 80 on Friday. All on light spinning gear. Talk about world class. Mixed in were some false albacore and chub mackerel. Although not showing much along the beach, schools of adult bunker are commonplace just a few miles off the beach. As usual for this time of year plenty of bass and blues to be had around the inlet and backbay as we await to migratory schools. Some years the schools are here by now, some years they are not. However, my records which go back a few decades show about 8 out of 10 years we have migratory bass by Halloween.

Next week, week of Nov 5th, I am off and looking to fill in dates starting with this Saturday Nov 3rd. So if you are itching to get into some world class light tackle fishing contact me soon as I know my dates will fill in quickly.

If you have some time check out my Barnegat Bay weather video from Saturday’s storm. Barnegat Bay Weather And don’t forget to subscribe to my YouTube channel so you can get notified as soon as I upload a fishing video. I plan on uploading a lot of videos of this fall’s action.

New Ordinance in Ship Bottom passed this summer that now requires all new home & foundation raising to fill your WEST of the boulevard lot either 16" or 20", use of retaining walls is permitted as well as a drainage system required. FILLING OF LOTS WEST OF LONG BEACH BOULEVARD 15.23.010 – Filling of Lots

Surface giant weasel in the “Russo Mullet” pattern and a regular Surface Giant in Blackfish.

For you science type, this is very important wind-energy stuff. I'm mulling over it before I write something locally apropos.

I wanted to introduce you to the international issue of marine fouling, and a company that is helping combat it.  Propspeed made by Oceanmax is a product that could save the global commercial, recreational, and shipping marine industries 10%-15% in fuel costs.

Marine fouling is estimated to cost the global marine based industries a combined US$ 150 billion every year in fuel lost, hull repair, transport delays, corrosion, maintenance, and structural breakdown. Marine fouling can increase fuel consumption by 40% and increase the overall voyage cost by as much as 77%.

A study by the Australian-Indonesian Exploratory Project found that build-up of marine organisms on the hull of the boat can increase frictional drag as ships move through the water by up to 80%. Even a clean freshly painted hull is susceptible to causing a 20% drag penalty.

If you are interested in speaking to anyone from Oceanmax including the managing director Clint Jones, I would be happy to connect you. He was the TV/Media boat coordinator for the America’s Cup and will be doing the same in 2021. He has some real interesting insights into the technology that went into creating their custom chase boat as well as Oceanmax’s technology.

Thank you for your time and interest.