Below: When you find yourself thinking you're bored ... are you really???

So you think you're having a bad day, eh? Look closely to see when things are truly not going your way ... Tuesday, October 27, 2015: The SCA are flying. Looking for south winds up to 30 mph. This will kill the current cleanness of the ocean. It might – with a double emphasis on “might” – spark a near-beach striper bite. Hey, it had in the past. Of course, the past was a whole other animal. What we have now is a shortage of fish to react to such winds.

Believe it or not, I caught some heat for suggesting folks fish for sundials in the surf. I promise that was not even remotely a sign of me giving up on fall fishing. It was purely my knowing that those buggers taste delicious – so it was a chef thing far more than a throwing-in-the-towel thing. I should have emphasized it was a way to keep a lighter rod active until the big fish arrive. Hey, folks target snapper blues. 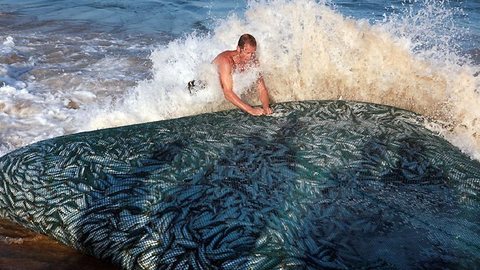 In fact, I have some writing to do for an upcoming Christmas season publication and I’m going whole hog on the high-hopes likelihood we’ll have supper-stripers galore -- right through December and even into an above-average-warm January. That’s hardly a surrender stance. As for staying bright-eyed and bushy-tailed over impending bluefish and bass blitzes, maybe I’ve lost a touch of spunk. That loss is made a bit worse by what looks to be a possible stretch of very iffy wind and sea conditions. I never worry as much about wetness. Water rolls off my back … as it has throughout my lifelong surfing and surf fishing life. I’m actually very pleased to see 548 anglers in the Classic. For this day and age that’s a fine showing – and likely to grow a bit more. The days of thousands of sign-ups went the way of $9,000 LBI homes. The demographics of nowadays dictates as many anglers as can make the tourney are making it. That doesn’t mean we can’t sweeten the ante someday – and maybe draw folks out of their private demographic boundaries. For now, let’s get down to fishing. A single hookup could prove heavy with cash and prizes.

Note: Bass taken off the Causeway bridges are not qualified for the Classic. I won’t go into why I’m bringing that up. Though I will note there are some nice stripers in the bay. Sedge banks along the south side of LBI are fair territory for the Classic. LEAVES GO VAN GOGH: We’re not big on fall foliage color hereabouts; too many evergreens overall. What’s more, where we do have a slew of color-changing deciduous trees, we don’t always get a sudden slap of cold autumnal air to trigger a sudden dramatic leaf color change. Beside,  Pennsylvania, New York and New England have the “fall colors” market cornered – and rightfully so. However, I want to devote this section to acknowledging the impressive efforts of the resident deciduous trees along Hilliard Boulevard, connecting Old Bay Avenue and Route 9, Manahawkin. Those imposingly huge oaks and maples are hanging some serious colors out to dry this year, with the smaller sassafras and sumacs filling in the undergrowth areas.

The unusual chlorophyll-free leaf showing along Hilliard might be in response to the dryness we’re seeing and the multi-night cold snap we had a short time back. Those are color-change slap factors.

Why “chlorophyll-free,” you ask?

How quickly one forget’s Botany 101, which I’m pretty sure was an actual course.

And, now that you think about, maybe you do kinda recall it’s photosynthesizing chlorophyll that leads to plant growth and gives a leaf its summer green sheen. 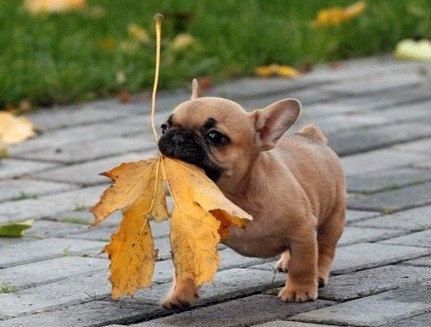 What you have forgotten is what happens when chlorophyll abandons leaves, come cold time. Chlorophyll desertion is the miracle behind blazing fall foliage. The wild colors at the height of autumn are the leaves showing their true colors – or their true chemical constitution, as the overly scientific case may be.

When chlorophyll goes missing, so goes its green impacts. Other leaf chemicals, like carotene and anthocyanins, then go color crazy.

But leaf life is short in the bright chlorophyll-free lane. Seeing color-burst leaves quickly wane, whither and fall proves it takes more than looks alone to survive. That’s the didactic side of deciduous trees. Anyway, it’s a Van Gogh-ish year for the local greenery. It will likely last – and maybe hue upward -- for the next couple weeks. I’d be remiss not to mention a folklore notion that bright autumns mean white winters.

By the by, this is the best time of year to identify many trees, via their fall colors.

If you just can’t let lying fall leaves lie, check out www.pinterest.com, under “Fall crafts.” You won’t believe the latest ways to go leafy wid it. Thousands of Dusky Sharks Are Killed Every Year in U.S. Longline Fisheries, in Violation of  Federal Law

WASHINGTON- Today, Oceana, which was represented by Earthjustice, sued the federal government to end the overfishing of dusky sharks in U.S. waters. Dusky shark populations off the Atlantic and Gulf coasts have plummeted by 85 percent in the past two decades as a result of overfishing and bycatch – the incidental capture of fish and ocean wildlife. In 2000, the National Marine Fisheries Service prohibited fishermen from targeting dusky sharks and bringing them to the dock, in an attempt to help rebuild the population. However, the Fisheries Service did not account for fishing vessels incidentally catching and killing dusky sharks as bycatch. Since that time, government data shows that as many as 75,000 dusky sharks may have been caught and discarded as bycatch in the Atlantic and Gulf.

In the lawsuit filed today, Oceana claims the Fisheries Service violated the Magnuson-Stevens Act, the primary law governing federal fisheries, by failing to end the overfishing of dusky sharks. Oceana also claims the federal government failed to establish an annual catch limit and measures to enforce such a limit as well as failed to revise dusky shark management measures once it became apparent that the current measures were not rebuilding the population to healthy levels, as required by law.

“The Fisheries Service has acknowledged for years that dusky sharks are critically depleted and in serious trouble, yet this population is still being overfished due to federal inaction.

Three years ago, the Fisheries Service had a chance to address the situation when it proposed setting bycatch limits and closing certain dusky “hotspots” to fishing. While this proposal was strongly supported by scientists, it was eventually withdrawn by the Fisheries Service, again leaving dusky sharks unprotected and overfished.

The federal government is legally required to take action to recover this population. Any further delay is unacceptable.”

Dusky sharks grow slowly and have low reproductive rates, rendering the species highly vulnerable to overfishing. Over 4,000 dusky sharks are snagged every year in fishing gear meant to catch other species such as grouper, snapper, swordfish and other shark species. Many of these dusky sharks – as much as 80 percent – die by the time they are hauled to the boat and tossed overboard. Federal fisheries law required  the Fisheries Service to cap the number of dusky sharks killed due to fishing effort by 2010, but it still has not done so.

“Dusky sharks are an integral part of a healthy ocean, but their numbers have been decimated by years of abuse,” said Andrea Treece, the Earthjustice attorney representing Oceana in this case. “Our nation’s fisheries laws require the agency to arrest this decline and to immediately rebuild this vulnerable keystone ocean predator.”

For more information about Earthjustice’s efforts to protect sharks and other vital parts of healthy ocean ecosystems, please visithttp://earthjustice.org/the-wild/oceans.

For more information about Oceana’s campaign to save dusky sharks, please visit www.oceana.org/Dusky. 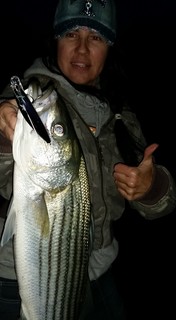 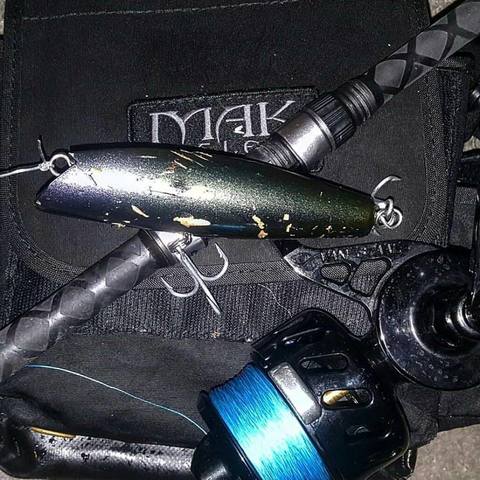 A Korean supermarket in London has shocked customers by selling live crabs wrapped in plastic. The shop's methods have been criticised as cruel. But do crabs actually feel pain?

For some seafood enthusiasts it's important that crab meat is kept as fresh as possible prior to cooking. But one shop has decided that there's nothing fresher than still alive.

Finding out whether that crabs feel pain is not as easy as it sounds. "It would be difficult for me to prove that [people] feel pain," says Robert Elwood, emeritus professor in animal behaviour from Queen's University Belfast.

Pain is a subjective experience and is tricky to measure. Scientists are left with having to look at how animals react to stimuli.
Most animals have simple reflexes that move them away from things that could be harmful. This is what we do when we whisk our hands away without thinking after touching a hot plate. But a conscious experience of pain is something different. Researchers have tried to look at whether crabs can show behaviour beyond a simple reflex reaction.

Elwood's work suggests that European shore crabs (Carcinus maenas) respond to electric shocks and then go on to avoid them. They like to hide during the day and would usually choose a shelter and stay there until it was safe to come out. But some crabs were given an electric shock in the first shelter they reached. This was repeated a second time and the experience changed their behaviour. These crabs were much more likely to switch shelters in subsequent trials than those who had not been shocked. They seemed to continue to avoid the shelter where they had been sparked.

Elwood's team also found that some hermit crabs were willing to give up their shells if shocked inside them. The likelihood depended on the intensity of the shock but also how good the shell was. It took a bigger shock to persuade a crab to leave a better shell.

Earlier work also found that prawns may show pain behaviour that is more complex than a reflex reaction. They groom their antennae for extended periods of time after they have had acid rubbed on to them and do less grooming when local anaesthetic is applied beforehand.

"What I can say is that virtually all of the experiments that are conducted have been consistent with the idea of pain. And really that's as far as you can take it. Whether they really feel pain and what is the nature of the pain is difficult to say," says Elwood.

But others remain unconvinced that animals with such simple nervous systems can actually suffer as more complex animals do.

"I think it's extremely unlikely that they feel pain," says Paul Hart, emeritus professor of biology at Leicester University. "I think it's very clear that it's never going to be demonstrated to everyone's satisfaction whether an animal can or cannot feel pain. "

But in the end, it may not matter. Hart says it might be best to just treat animals in the best way possible. "There is no way of demonstrating scientifically that a fish or crab or even an ape can feel pain in the same way that we do," he says. But it might be worth giving them the "benefit of the doubt Nice dog pic. That botany dissertation was more interesting than the one I received in my botany/ plant biology classes lol.