Tuesday, October 20, 2020: Fishing has not been autumnally impressive, though the weather has generally been holding up ... Below: After having fellow surfers take off in front of him time and time again, Lyle thought it was time to deliver a little wake-up call regarding respect. Tuesday, October 20, 2020: Fishing has not been autumnally impressive, though the weather has generally been holding up its end of the fall greatness bargain. It sure seems any protracted fall chill, ye olde frost-on-the-pumpkin stuff, is nowhere to be seen or felt. Of course, that can change in a jet stream minute.

At the same time, it’s far too early to think in terms of a nonwinter winter just because we’re slow in cooling down. All it takes is one muscular downward thrust by an arctic jet stream and Bittersville is on the map overnight.

If this blog is still wearing short sleeves come mid-November, it might then be time to wax suspicious. More long-range forecasters are seeing a disproportionately mild winter in the making, even after global warming is poured into the mix. I’m not overly into a winter too mild to feel. There really should be some huddle-around-fireplace time thrown in. Of course, I might regret saying that come January.

HOOKING TIMES: I’ve gone baity – no, not batty. Some friend-made pompano rigs came my way, circle hooks and all. I’m training my bloodworms to wave seductively to passing fish when on the hook.

The rigs have those tweener 1/ and 2/ hooks, which are small enough for larger kingfish and plenty big enough to hit home within the hard-fleshed mouth of even a 37.9-inch bass.

Hook size becomes oddly inconsequential when you see the tiny ones used on flies to catch steelheads and trout over 25 pounds. 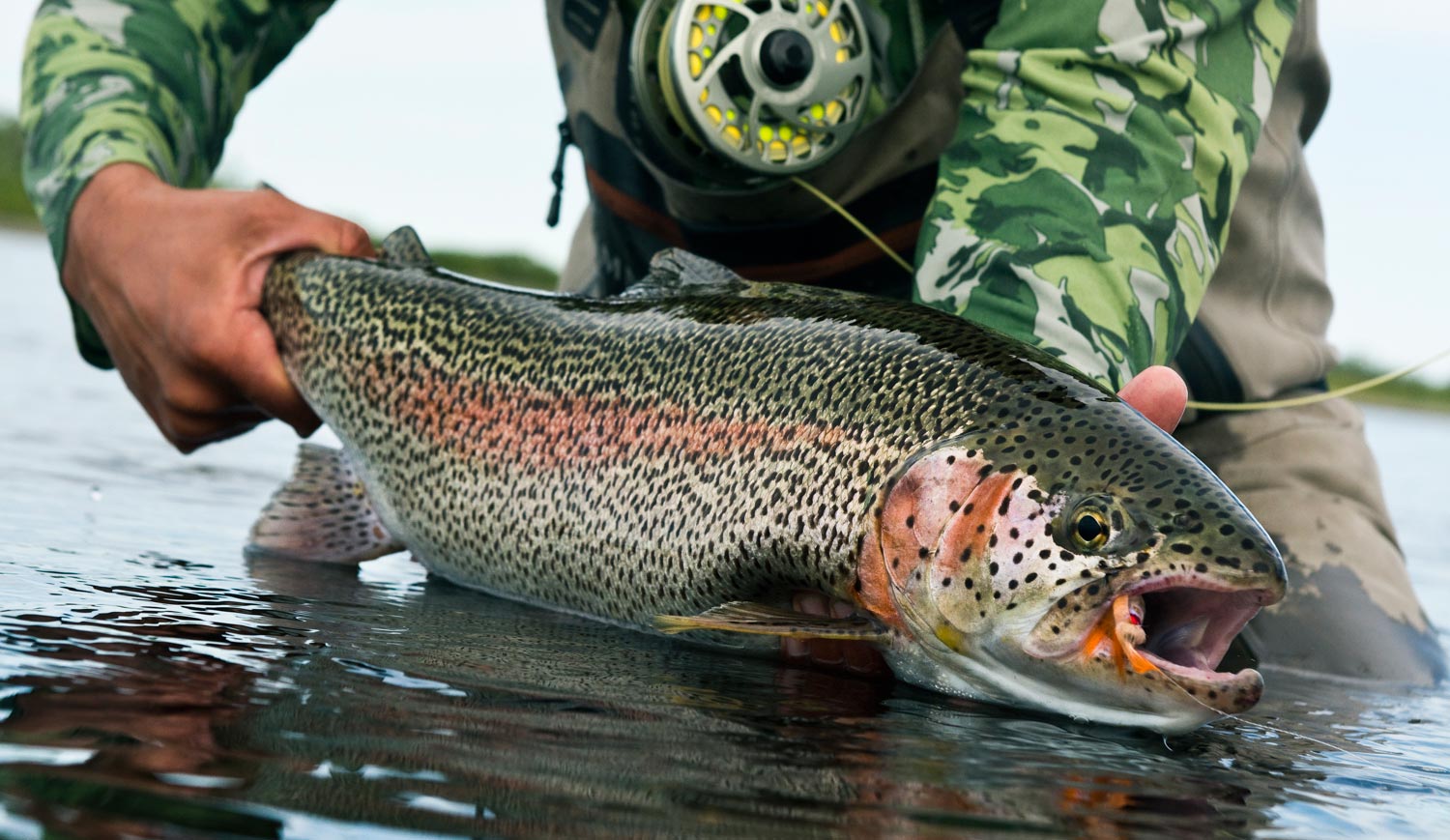 Back when I’d fish beachfront jetties for tog, I’d often get nice-sized stripers on those special 1/0 blackfish hooks – and still have a hard time unhooking them. 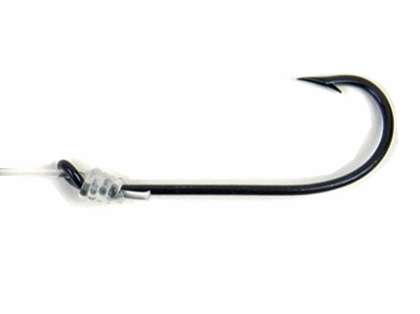 It often comes down to drag. I won’t include patience since it does not bode well for the release health of a bass to be fought to exhaustion. With all the sharks out there – instantly attracted to the vibrations of a panicked fish being reeled in – a C&R fish without enough oomph to bolt is a dead duck.

As to sharks on stripers, check out this news report: http://www.youtube.com/watch?v=CHuoha368yQ

Fishing-wise, the kingfish bite has been slow, as rough surf has stirred things. The kingfish are still there, they’re simply harder to locate in the roil.

Yesterday in Holgate, there were so many small snappers ravaging rainfish that I could barely throw the cast net for any lingering mullet without nabbing a slew of them. As small as they are, they can bite the crap out of the net’s mono. 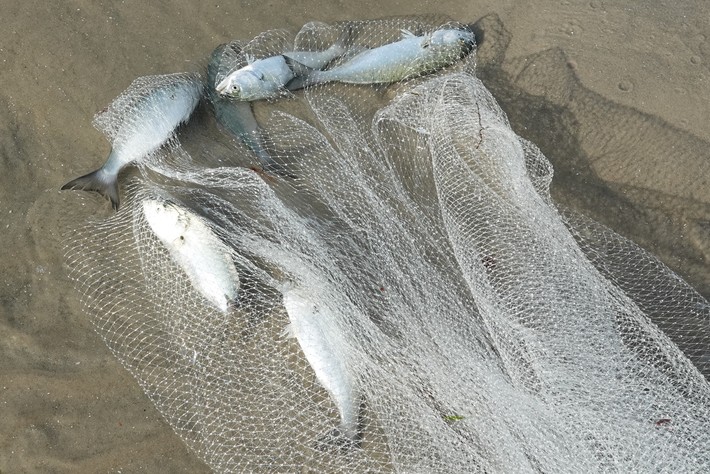 REPLEN REPEATS?: When might the feds figure more heavily in our beach sand scene? If no beach traumas arise, 2023 marks the next “scheduled” replenishment considerations at the Corps level. As of now, only a few beach zones are looking down and out. Mid-island the beaches are record-breaking wide. Of course, if we’ve all learned anything during this weirdest of years, it’s how fast things can change. The beachline is a quick-change artist of the highest order, though the current beach width in Ship Bottom would take a three-day wind whacking before erosion could reach the halfway point, it’s that wide.

As to the troubled sand down Holgate way, that beachline needs some serious thinking. It is seemingly on an erosional role that just won’t quit. I’ve been repeatedly told that only a thorough restructuring of the beachline to the south, adjacent to the refuge and extending down to the Rip, will suffice.

The concept of a super terminal groin remains in play, but it seems obvious such a thing would have to extend out into the ocean for hundreds of yards, even further than first thought.

As to the sand material for either a beach rebuild adjacent to the refuge or a beach rebuild north of a super groin, the material is nearby, right outside Little Egg Inlet. As to the many millions of greenbacks needed to do either, that would take lobbying like never.

I might theoretically add that Holgate proper has yet to really take on the replen sands migrating down from the north. That support sand would be there by now except for the fact we’re in – dare I even say it?! -- an inactive storm period. That’s especially spooky to bring up since some folks believe the longer storms stay away the more fiercely they return. While that is absurdly anecdotal, there is also the irrefutable law of averages monster that confidently fosters the mantra that it’s alwasy only a matter of time. I fully agree, you ogre. So, I duly suggest everyone move the hell outta of Southern California before a terminal shaking commences. As for us, I’m mainly focused on the stark reality that I need some sugar. I’m clean out.

Congratulations to week one winner, Stephen Pirrello (badge #76) for the shot of a young angler and his blowfish on the beach. Sure, puffers aren’t a category in the LBI Surf Fishing Classic, but remember you don't necessarily have to register a fish to win a weekly photo prize! Stephen, bring your badge in to Surf City Bait and Tackle to grab your new Tsunami surf rod. For week two, share a photo of your best tournament fish or even the perfect fishing moment here at the LBI Surf Fishing Classic Facebook page and be sure to include your tournament badge number. One contest participant’s photo will be selected this week to win a Tsunami 12-foot heavy surf stick (1202H). Good luck to all!

Below: That's Lachlan he's got his own badge, #76. He's thrilled