Below: Why it's best not to have dads come up with rainy day games ...

And why it's best for little guys not to try piling on ...

Below: An aggravation only experienced in the most war-torn nations ...

Tuesday, October 18, 2016: The beach washover this a.m. was the worst yet. Both the tides and the swells should be backing off … slowly, meaning a couple more days of contending with high tides forcing many surfcasters half way to the dunes.

Fishing pressure on the beach remains decent, though far from Classic days in the past.

South winds this time of year can activate a striper bite. I’ll know more tomorrow since I might be forced to try chunking donuts.

After tomorrow, the winds will be all over the compass, usually ending up out of the south. Then, at long last, we'll see what could be the season's first true westerly blow, part of a traditional cold front, tailing from a Great Lakes low pressure. We could get as many as three days of coolish offshores from the system, before we're revisited by non-autumnal air. 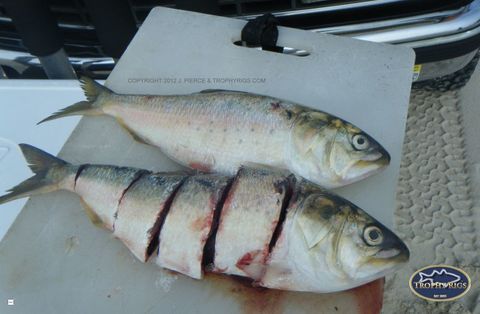 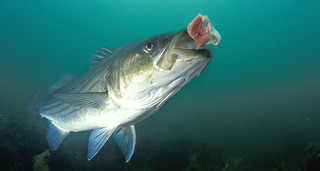 Yesterday, I did some late-day snapper fishing with Stu in Holgate, west peninsula. It was a snapper hit on every cast, so I decided to experiment a bit. I zipped back to the back cut and threw net on some hardhead (striped) killifish. These minnies are supposedly forsaken by gamefish. 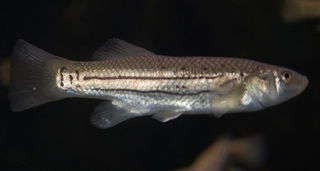 Well, upon baiting up and casting out a double-hook rig, I quickly had bluefish on both hooks … in under a few seconds. I went through a pocketful of hardheads – hey, I didn’t have anything else to carry them in. For sure, bluefish aren’t the best species to test a killifish’s desirability upon. However, I also have word of big fluke sucking down big hardheads. Approaching it more scientifically, why else would hardheads pin themselves flush to the shoreline if not distancing themselves from something hungering after them out there? 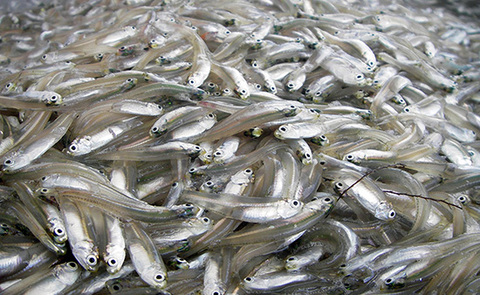 FORAGE FISH AND US: I took an ocean water temp of just under 67. That’s way too warm, almost freakily so, for fall surfcasting. However, there is already some very brisk boat bassing being done not far off the beach, where bunker pods are once again calling forth to boat anglers … bogarting the bite.

I was hoping the recent drawn-out ocean stir would bounce bigger bass toward the beach – and it did, to some Classic-weigh-in degree. But that brings us back to those mild beachside degrees.

Why is water warmth a turn-off for bass and big blues? It has to do with the ideal temperature for a gamefish. 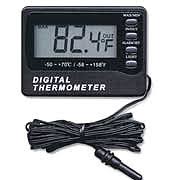 There is an ideal water temp, usually cool but not overly cold, where a high dissolved oxygen availability leads to easy breathing for, say, striped bass. This ease of breathing maximizes the ability of the gamefish to chase food, without the human equivalent of becoming winded. This explains why migratory bass often follow water temps to their liking – helped along by forage. Speaking of which …

Forage fish also have an ideal water temp, usually far higher than most gamefish. This heat tolerance is why they can hang in a superheated bay all summer.

The fall cooldown of the bay has an obvious impact. The small fish are duly shocked, as their 85-degree bay water plummets into the 60s and below. Unlike gamefish, any ease of breathing in cool water is negated by a slowing down of their metabolism. They become sluggish; a sure sign to migrate, posthaste.

Cool waters hike up the available energy and oxygen for stripers, while simultaneously slowing down the activity level for their prey. It’s a bit unfair but nature has never been overly impartial.

Now, back up to warmer water that we’re now seeing. While 65 degrees is still no bargain for fleeing baifish, they’re far faster than even a primed bass is willing to risk expending too much energy upon. Remember, the likes of rainfish, spearing and even tiny bunker are mere tidbits

A quick forage fish sidebar: Mullet are very early departers/migrators. They remain in an ultrafast mode by migrating when the waters are mild. At the same time, they’re perpetually elusive, even in water temps in the 50s. Bass are generally not big on mullet meals, unless they happen to get some at a distinct disadvantage -- most often when mullet are in huge can’t-miss schools or wounded by snappers. Waiting for a perfect mullet-eating time is called opportunism.  It doesn’t come that often.

Sidebar: Smaller- and medium-sized bass are far more inclined to chase after mullet, often haplessly. Their energy budget is solid. A chase is worse the effort.

The entire sluggish/wounded forage fish syndrome is behind plugging. A plug is meant to offer otherwise passive bass an opportunity they feel comfortable with expending energy upon. I often say plugs are looking for the dumber fish, maybe it should be the lazier fish.

ENTER BUNKER: That brings us to a famed big-meal forage fish, namely bunker – the big ones, now balling up nearshore.

Close-in bunker are OK swimming the chilly sea. Having spent a good chunk of their early lives in balmy bay conditions, they’re a tad sluggish when temps drop through the 60s and into the 50s. But they’re already employing a pack/school mentality to fend off, even confuse, gamefish lurking below. Speed is not of the essence for bunker – except in short escape spurts. 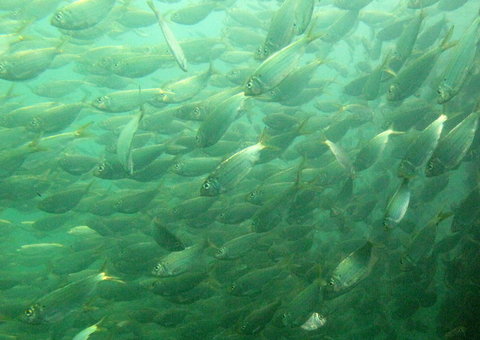 However, when you have tens of thousands of bunker balled up -- some reaching their 10-year life expectancy, some wounded and a few feeling out of sorts – individual fish can fall from the grace of the pack. A bunker out of lock-step with the school is a quivering dinner bell for energy-conserving bass below. A fall-out bunker presents an easy meal with minimal energy expenditure. Bunker-ball anglers know this all so well. Drop a hooked bunker below even a calm ball of bunker and it’s astounding what waits hungrily below.

The massively returning nearshore bunker schools, swollen through conservation, are the cat’s meow for laidback big-ass bass, many of them now being genetically encoded to follow this bunker-based path-of-least-resistance when reaching Jersey. Now, bring all this forage fish stuff together and you might very well have the shoreline ecological situation we’ve been seeing for a number of years now. Warmer falls have meant speedier forage fish in close, attracting mainly smaller bass, unable to compete beneath bunker balls.

This is absolutely not a doomsday angling scenario for Island surfcasters. The striped bass count, despite what you might read, is astronomical. Yes, the biomass is declining in average size -- at a near-alarming rate. But, simultaneously, the legion of keeper (28-inch) to mid-sized (32-to 40-inch) stripers is burgeoning by the year. That mushrooming of the non-trophy-sized fish bodes well for LBI. 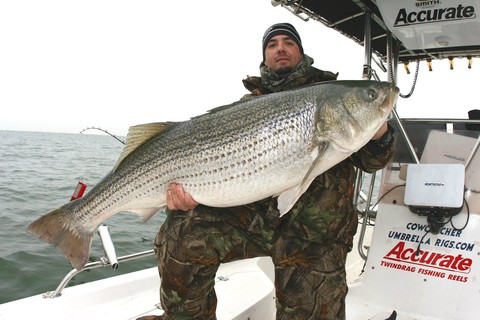 Persistence pays off. Although not a derby fish or a keeper, at least its something. 24" on a popper. Could have kept it with my bonus tag, but was released. Sorry about the pics, I'm not a professional selfie taker like
Todd Avery. 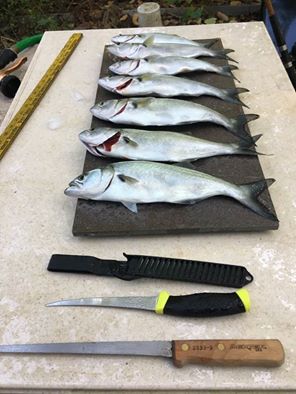